Cascade Falls (also known as The Cascades) starts off as a series of tumbling waterfalls and cascades through a dense forest in the Western Yosemite High Country.

However, as it gains momentum and combines with Tamarack Creek just below the Big Oak Flat Road, it plunges as an impressive 500ft waterfall before feeding the Merced River.

I’d imagine this is probably the introductory waterfall for visitors entering the park through its western entrance at Arch Rock.

After all, going that route would result in this being the first major waterfall encountered in the park.

Usually, Bridalveil Fall plays that role for us since we typically enter the park from the southern entrance.

However, as you’ll see later on this page, it’s possible to stop for a quick scramble to get the photo you see at the top of this page before even entering the long tunnel to the Tunnel View.

Given this waterfall’s enormous size, we found it rather perplexing that it doesn’t seem to get the same amount of love as its neighbors further to the east in Yosemite Valley.

Perhaps it’s because the rugged Merced River Canyon is really more of an area that visitors to the park merely pass through.

That said, in the park’s early years, visitors had to enter by stagecoach from Coulterville.

The route passed before Cascade Falls, which offered visitors a cool and refreshing respite from the typically hot and dusty approach. Thus, the falls was probably better known back then than now.

Like most of the waterfalls in Yosemite, its flow is best during the annual Spring snowmelt. However, I’ve read that it can go dry by early Autumn as the falls depletes its snowpack throughout the Summer (similar to Yosemite Falls).

We know of a couple of ways to experience the main waterfall (the part we’re referring to as Cascade Falls), but we have also gotten close its Upper Cascades on the Big Oak Flat Road.

So we’ll break down these excursions below.

This was our favorite vantage point for seeing the main plunge of Cascade Falls even though it wasn’t the official viewpoint.

The tricky part was finding it as there was no explicit signage to experiencing the falls in this manner.

First, we had to drive the Wawona Road (Hwy 41) towards a section of the road where it curves while being flanked with elongated pullouts paralleling a concrete wall by signpost W3.

According to our Yosemite Road Guide, this part was called Turtleback Dome, and I believe we had to scramble onto the dome itself in order to get the view you see photographed above.

Once we parked the car on this elongated pullout, the next tricky part was figuring out a way to safely get over the concrete wall without taking a nasty fall.

Our trick was to look over the wall on the end furthest from the Wawona Tunnel near a tree standing next to that wall growing from the other side.

Then, we had to search for either a tree root or another ledge to reduce the dropoff on the other side.

Once we stood on the intermediate foothold, we then were able to complete the descent without taking a leap of faith from the top of the concrete wall (a leap that we really wouldn’t recommend).

Then, we were on the granite surface and we were able to scramble lower until we got satisfactory views of the Cascades.

To the left of the Cascades, we could see the upper tiers of Wildcat Falls, which was much thinner than this waterfall.

Even from this vantage point, we could see in the distance the extent that the Upper Cascades continued further up the mountain! And if we looked far to our right, we could glimpse Half Dome way in the distance.

In any case, we never scrambled all the way to the edges of Turtleback Dome where I’d imagine there would be dropoffs going into Merced River Canyon.

So we can’t say whether there might have been even better and more revealing views than what we’re showing you here.

We call this view the official viewpoint because there’s a dedicated car park, signage, and lookout of most of the lowest tier of Cascade Falls.

The car park or pullout for this spot was on the Road 140 along the Merced Canyon at signpost M1 about 1.7 miles west of the Route 120/140 junction and about 3 miles east of the Arch Rock Entrance (i.e. the Western Entrance) to the park.

On one occasion we tried unsuccessfully to get right up to the base of this waterfall, but it turned out to be a bit of a bushwhack and dicey boulder scramble with a lot of fast moving water.

So aside from that futile experience, I don’t believe there’s a sanctioned way to get closer to the base of the waterfall.

Then again, maybe some intrepid scramblers may be able do it when Cascade Creek would be at lower flow.

As you drive up (or down) the Big Oak Flat Road (Route 120), there are a couple of pullouts that you can stop for and get different looks at the Upper Cascades.

The first pullout is at the bridges over both Tamarack and Cascade Creek at signpost B2 (note that there is no pullout for signpost B1 if you’re curious).

This pullout by the bridges is just west of the second tunnel. Once you’re out of the car, you can walk to the road bridges and look up closely at the upper tiers of the Cascades.

Further up the ascent on Big Oak Flat Road, you’ll find signpost B3 whose pullout is also on the left side of the road facing uphill.

It’s here that you can see Bridalveil Fall way down the Merced Canyon, but you can also stop the car here and look back towards Tamarack Creek and Cascade Creek tumbling together.

I actually walked further uphill along this road from the pullout for a slightly higher perspective (pictured above).

This pullout is minutes before the first of three tunnels as you ascend Big Oak Flat Road (or soon after you leave the last tunnel as you descend this road in the opposite direction).

Early afternoon is the best time of day to get this view of both Tamarack Creek Falls and the Upper Cascades tumbling together.

Cascade Falls resides in Yosemite National Park. For information or inquiries about the park as well as current conditions, visit the National Park Service website.

The Cascades feed the Merced River downstream of the mouth of Yosemite Valley. The West Entrance of Yosemite (near El Portal via Mariposa) gets you closest to the official overlook, but since we tend to come into the park via Fresno on the Hwy 41, we tend to get to the better view of Cascade Falls near Turtleback Dome. Our route to get to Yosemite National Park’s southern entrance from Los Angeles would be to go north on the I-5, then onto the Hwy 99 through Central Valley, then onto Hwy 41 at Fresno. At that point, we would follow the Hwy 41 (now Wawona Road) up to the southern entrance of Yosemite National Park (passing through smaller towns like Coarsegold, Oakhurst, Fish Camp, etc.) then continue following this road for another hour or so into Yosemite Valley (passing through Wawona), where the long Turtleback Dome pullout would be a short distance before the long tunnel by the view of the Gates of Yosemite Valley.

The drive from LA to Yosemite Valley would typically take us around 6 hours.

Comprehensive sweep starting with Half Dome, then focusing in on the cascades on Tamarack Creek before ending with Cascade Falls and its context 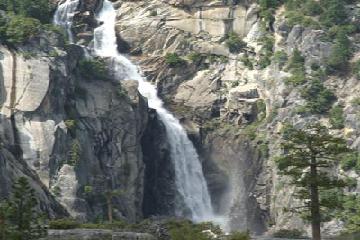 Hiker 2020 Cascade Falls, California January 30, 2010 4:14 am by Tim - I visited these falls April 2005 and loved them. It's almost as good as Yosemite Falls but you have to be in the right place to view them Cascade Falls. I saw the same view as Johnny Cheng. Park at the Inspiration Point (near the tunnel) and carefully walk down the rockface northward to near… ...Read More