This itinerary covered a weekend at Yosemite National Park that I cynically referred to as the “change-in-company-vacation-policy” trip because they essentially changed the rules in such a way that I either had to use some vacation hours or lose them as they reduced the maximum accrual.

And since I didn’t have any place in particular that I was itching to go to, I decided on Yosemite even though I had been here many times before. In fact, this trip was so last minute (would you believe I was able to score an Upper Pines Campground spot in less than a week before this visit?) that Julie couldn’t take the Friday off so my Mom decided to come with me.

It turned out to be a great Mother-Son Trip, and we managed to re-visit old haunts in ways that we previously hadn’t done before, especially with the guidance of Michael Fry’s Photographer’s Guide to Yosemite book. So my non-cynical name for this trip was the “Yosemite Photo Run” since we were aiming to view the same old attractions in the best light…

Here’s a summary of how this trip turned out… 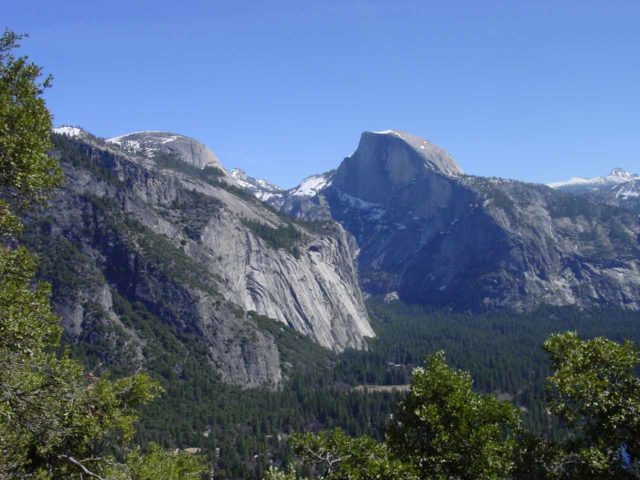 Columbia Point – This was the first time that I made it as far as this lookout on the way up to the top of Yosemite Falls, and as you can see from this photo, it’s a nice spot to get a view of both Half Dome and North Dome across from it. This turned out to be our turnaround spot before going to the John Muir Trail with perfect late afternoon lighting for the waterfalls over there. 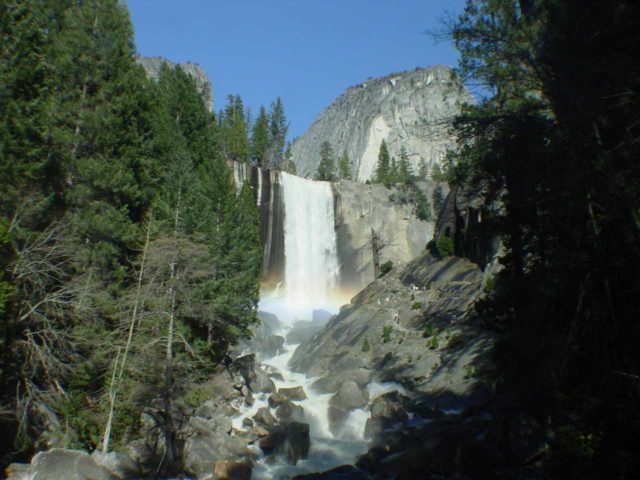 Vernal Fall with rainbow – When Mom and I showed up to this waterfall in the late afternoon, we were surprised to see a bold arcing rainbow in the Mist Trail. While there wasn’t enough mist to make it uncomfortable, there was just enough to make the rainbow display magical. 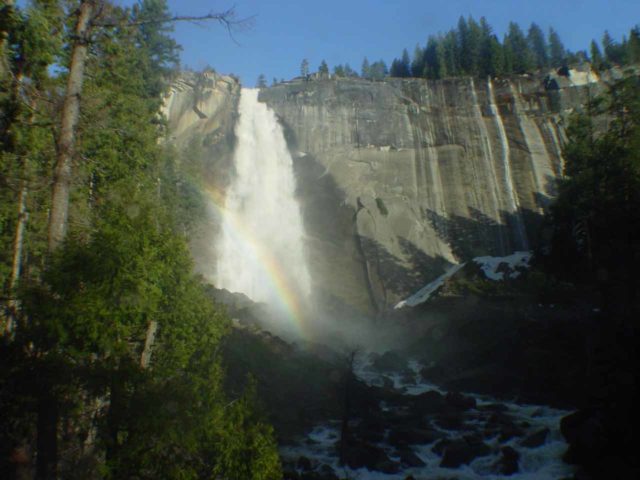 Nevada Fall with rainbow – Continuing higher up the Mist Trail, we also chanced upon a nice rainbow right at the base of this waterfall. This was our turnaround point, but that rainbow was something that neither Mom nor I had ever seen before across this particular waterfall, and that made it memorable. 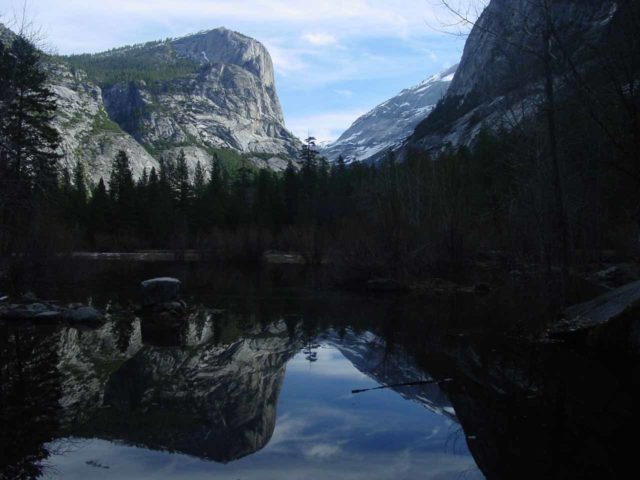 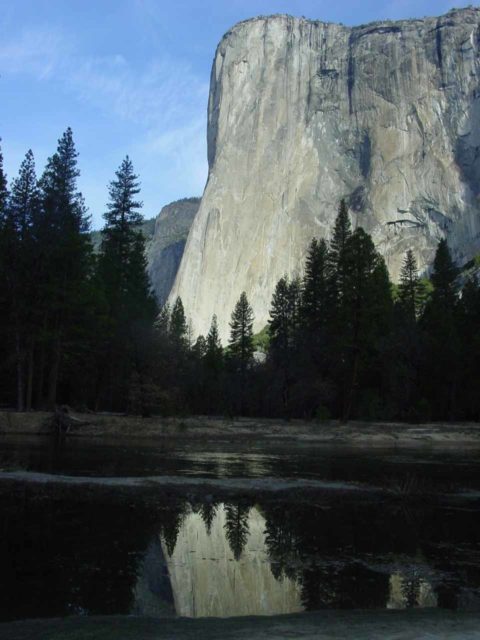 El Capitan – In all the years we’ve visited Yosemite National Park, we must have seen this monolith countless times. But we never really bothered to see it in its best light nor its best position until we utilized the Michael Fry book. And so we wound up looking across a calm Merced River with the bridge of El Cap’s nose reflected in it. And that made for us experiencing this place like never before. 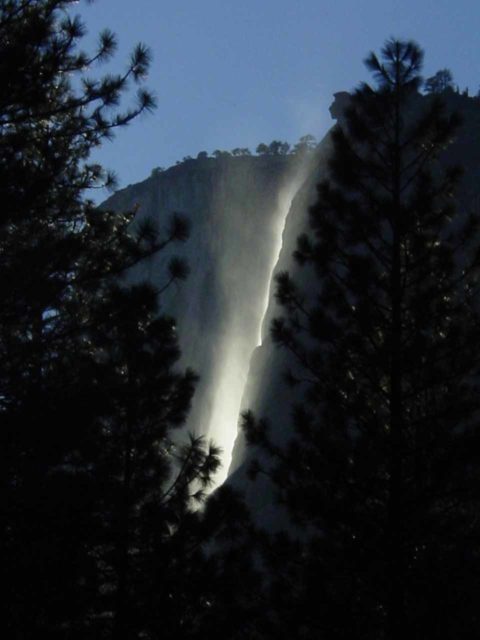 With a very early start to the day, we were able to beat LA Traffic and still make it to Yosemite National Park as if we had a whole day to explore. So we had time to visit Cascade Falls and Wildcat Falls, but we also went to Hetch Hetchy and did the hike to Wapama Falls while taking in Tueeulala Fall and an unnamed waterfall that flowed better. We then returned to the valley to check out the Tunnel Overlook as well as Bridalveil Fall and the non-firefall Horsetail Falls. 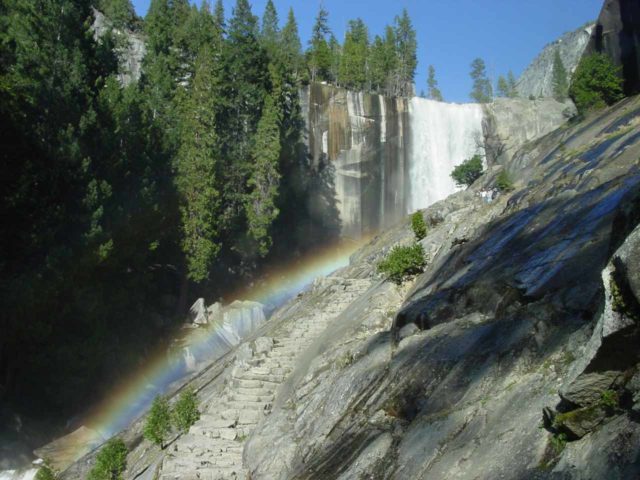 On this day, we revisited Yosemite Valley and saw some things in a different light such as the Cathedral Rock, Horsetail Falls, then hiking up to Upper Yosemite Falls (and running into a co-worker on the trail), then going back to Happy Isles to do part of the Mist Trail and see Vernal Fall and Nevada Fall with rainbows. 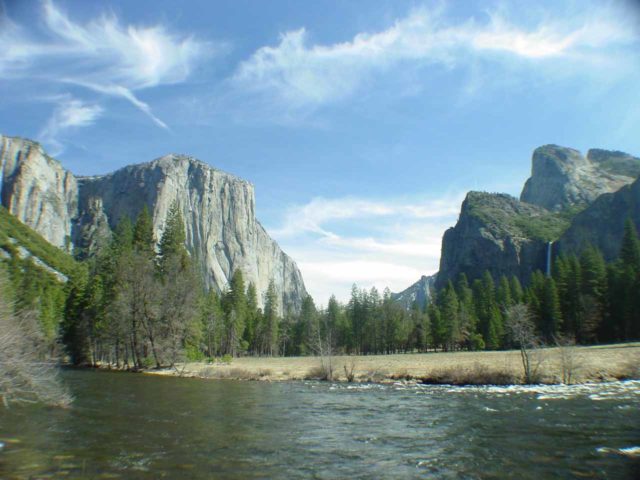 After breaking camp, we slowly made our way out of Yosemite Valley but not before seeing Horsetail Falls again, El Capitan’s nose, Mirror Lake (and the surprising Mirror Lake Falls, Royal Arch Cascade, El Capitan Falls, and Valley View. Then, we went home. 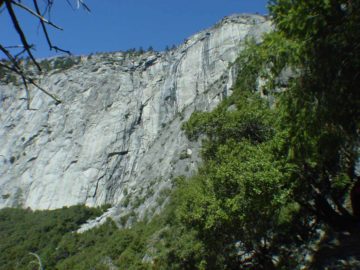 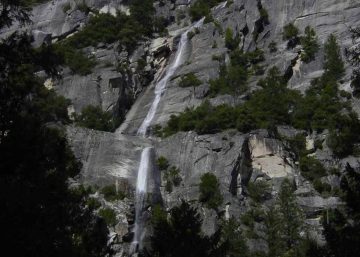 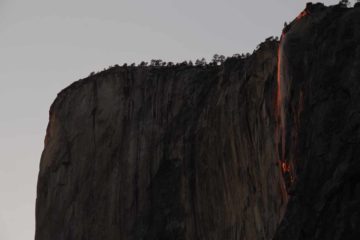 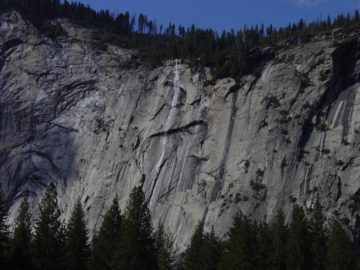 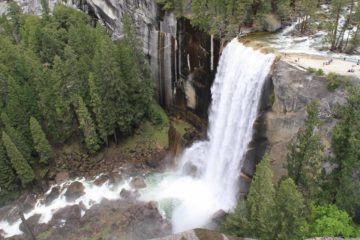 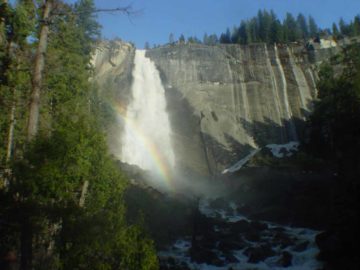 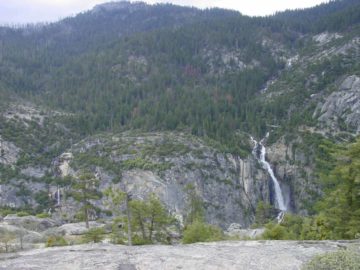