Raukawa Falls was an attractively wide waterfall that Julie and I saw from afar.

As you can see from the photo at the top of this page, we couldn’t get a closer look at it, which was a shame because it was the kind of block waterfall that Julie really liked (ala a somewhat smaller version of Cumberland Falls).

In fact, if it wasn’t for the distant look-but-don’t-touch view, we certainly would have bumped up its scenic rating score.

In any case, this waterfall was said to be about 15m tall and 50m wide.

Its lookout was roadside so we easily coupled this experience with the opportunity to stretch and take photos while driving the twisty road between Wanganui and Tongariro National Park.

As tempting as it was to think that Raukawa Falls was on the Whanganui River (the longest navigable river in New Zealand, which even had a National Park dedicated to it), the falls actually belonged to the Mangawhero River.

Even though the watercourse wasn’t as famous, it still flowed year-round so the falls itself would last all year as well.

Finally, in terms of the viewing experience, we learned during our January 2010 visit that the waterfall gets the best lighting (if it’s sunny) during the morning.

In the afternoon, the falls tended to get shadows contrasting with harsh sidelighting, which we learned the hard way from our visit in November 2004.

Raukawa Falls is administered under the jurisdiction of the Department of Conservation. For information or inquiries about the area as well as current conditions, visit their website.

From the SH3 and SH4 junction in the city of Wanganui, we drove north on SH4 for about 60km. The well-signed roadside pullout for the viewing deck of the falls was on the left (west) side of the twisty highway about 4km north of the Fields Track turnoff.

Going in the other direction, it was about 37km along SH4 south of the Tohunga Junction at the SH49 and SH4 (9km northwest of Ohakune or 27km south of National Park). The pullout would be on the right side of the road going in this direction.

Diagonal sweep from its base to its top 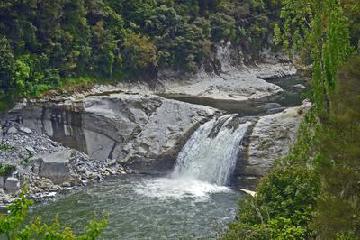 Raukawa Falls Oct 2018 December 28, 2018 2:06 am by Ian Cooper - I might be the first to bring you some sad news by the look of it. Raukawa Falls has undergone a dramatic change sometime between your visit in 2010 and my last visit in October 2018. It looks like a big chunk of the front wall, which is made of a hard sedimentary grey clay… ...Read More