Hengifoss was the star waterfall attraction of the Eastfjords area around Lagarfljót and the town of Egilsstaðir. While this waterfall was said to be the third tallest waterfall at 118m (at least when we were there in 2007), we thought the red strata patterns on the cliff giving rise to the falls was also very interesting as it was something we didn’t typically see in other waterfalls.

According to a sign that we noticed while hiking, it explained that there was a four-step process giving rise to the red stripes. The first step was the deposition of volcanic ash and basaltic lava. Then, the mineral rich ash sitting atop the hardened basalt became soil. Clay compounds were formed from this soil as a result of the damp climate of the Tertiary Period. Then, lava would flow over the soil, which was rich in iron, causing it to oxidate and turn red thereby resulting in the reddish clay trapped between the thicker basalt layers. This process would repeat, which was how there were multiple stripes.

Trivial statistics aside, this waterfall sat high atop a cliff overlooking the head of lake Lagarfljót (“LOG-ar-flyoht”) as well as its surrounding forest (a rarity in Iceland) called Hallormsstaðarskógur (“HAT-lorm-sta-thur-skoh-gur”). This meant that in order to get a closer more satisfying view of the falls, we had to do a hike, which was 2.5km long each way on a pretty much relentless climb before the slope kind of mellowed out a bit closer to the falls. We treated this as a half-day excursion, but we wound up taking about 2 hours total (though it would’ve been maybe another 30-60 minutes longer had we continued to the end, which I get into below).

On the way up, I noticed smaller waterfalls deep in the gorge adjacent to the trail. Most of those were not easy to see (and the morning shadows didn’t help matters either). However, at about 1.2km on the trail, Julie and I noticed the intriguing Litlanesfoss (also known as Stuðlabergsfoss), which was surrounded by basalt columns, which was flanked by obvious basalt columns in much the same way as Aldeyjarfoss and Svartifoss. Depending on the viewing angle and where we were along the cliffs, we were able to see both Litlanesfoss and part of Hengifoss further upstream together.

During much of the hike up, there were frequent spur trails taking us towards a parallel trail skirting the edge of the gorge containing the waters from Hengifoss. Much of this “edge trail” were worn and slippery due to the loose pebbles atop packed hard dirt. Thus, we not only had to mind the butterflies in our stomachs whenever we found ourselves close to the cliff edges, but we also had to be very cognizant of the dropoff hazard (which the signs here also warned about).

Eventually, we climbed up to a point where the parallel trails converged and it continued until we were essentially at the apex of the climb with still another 0.5 kilometer left to go to reach the base of the falls. We actually stopped where we got a fairly distant but total view of Hengifoss because there were more worn sections of trail where it looked very easy to fall into the gorge in many spots. But I’m still kicking myself for not doing that last section of trail. I even witnessed a handful of people continuing on past us, but for some reason I opted to be content with the view from here.

At least with the long climb up, the rest of the hike was all downhill back to the car park. We got to enjoy the views throughout the hike while also enjoying once again Litlanesfoss and some other unnamed falls in the gorge as well.

From Egilsstaðir (“EH-yils-sta-thir”), drive south on the Ring Road (Route 1) for 11km. Then, turn right onto Route 931 and follow it for about 21km as it follows the southeastern shores of Lagarfljót before eventually crossing a bridge and reaching a three-way junction. Turn left at the junction onto Route 933 and drive for 1.6km. The turnoff for the signed car park is on the right.

Note that while driving the 21km stretch along Route 931, we passed alongside a forest, which was probably the most extensive forest remaining in Iceland. To better appreciate the trees, there was even a short walk labeled Gönguleið that went amongst these trees. 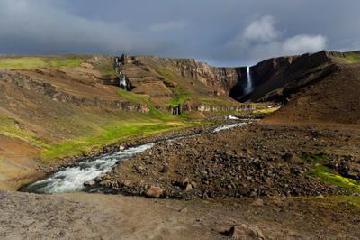 Hengifoss June 23, 2014 1:02 pm by Dawn Brealey - An amazing place to visit. Easy walk to the waterfall with stunning views of the lake and mountains you as you walk off - you will not be disappointed ...Read More 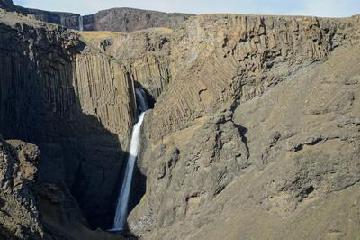 Nice waterfalls (Hengifoss) February 12, 2014 11:20 am by Georg - I liked both waterfalls. They're quite different but both pretty and special: One is surrounded by very even basalt columns and the other is showing the red & black stone layers as clearly it's possible. The hike on the south-west side of the water is nice, in the upper part at times a little bit… ...Read More