Kaaterskill Falls was an impressive two-tiered waterfall in the Catskill Mountains said to have a cumulative drop of about 260ft, where the upper drop was said to be 175ft. We were curious about this waterfall ever since someone contributed a writeup about it a few years ago. With our return to New York in 2013, we were determined not to let this one pass us by. However, in doing so, we had to squeeze in a visit in the late afternoon while racing against the onset of nightfall as well as the threat of rain. Thus, I ended up doing this hike solo while letting Tahia continue her afternoon nap in the car with Julie watching her (though it would turn out that this hike wasn’t very child-friendly anyways).

The hike didn’t actually start from the official trailhead at the Kaaterskill Clove, where there was an attractive cascade besides the road along with an interpretive sign. Instead, there was a forest service car park further up the road (see directions below), which featured a nice view of a valley bathed in Autumn colors. We were actually about to park at the small pullout near the trailhead at Kaaterskill Clove until a local told us about the official car park while also warning us about police who would fine us $200 for parking there. That person also recommended to me about going up to the top of the lower waterfall, which he said was slippery in spots but that I looked prepared with my hiking boots on. I guess I’d find out later what he was talking about.

So from the official car park, I hiked about 200 yards along the road downhill towards the hairpin turn at Kaaterskill Clove. This road walk was literally on the road in places where retaining walls were in the way. Otherwise, I was able to remain behind the guardrails and in the gutter to the left of the road (facing downhill) to stay out of the way of vehicular traffic going uphill. Once I made it past the bridge (and cascade) and to the trailhead sign, I then went back over the guardrail to descend towards some rock steps that began steeply behind an interpretive sign. The signs indicated that the trail was 0.5 miles long in each direction from here.

I realized that the ascent here was already steep and rocky enough to make me glad I didn’t bring my daughter along. Yellow markers on trees helped assure me that I was going the right way. Once I was at the top of this initial climb, the trail continued to go uphill but more gradually. The trail was still somewhat rough and eroded in spots, but was otherwise fairly straightforward to follow. I just had to be careful about turning an ankle given the uneven footing, especially in my haste to beat the onset of darkness.

Eventually after about 20-30 minutes or so, I made it to the end of the official trail where there were some large boulders from which to view the tall and columnar two-tiered Kaaterskill Falls sandwiched between some Autumn foliage. Given the narrow window between the foliage to see the falls without stuff getting in the way, there really wasn’t that much real-estate to see the falls from this spot. There were other people sharing this limited viewing area so there were some moments where I had to wait before I could take photos and movies without my shots getting inadvertently photo bombed.

Just before getting onto the rocky viewing area, I noticed that there were some warning signs telling me not to proceed any further up the rocky slope rising along with the falls. When I looked up past the sign, I could see a steep climb that looked fairly doable though it did look steeper the higher up it went. I guess the guy I met at the trailhead earlier suggested I should at least go up this route to get to the base of the upper drop of Kaaterskill Falls. However, I knew I would be doing this at my own risk.

So I went up the part rock, part dirt ascent, which became steep enough to require me to use my hands for both balance and for a self-boost over some of the larger rock obstacles. I eventually got up to a section where there was a thin rope traversing a particularly eroded slope. I quickly learned that trying to traverse this slope above the rope was unwise as it was way too slippery to proceed safely. So I went beneath the rope, held onto it, and slowly made my way across the slippery slope before continuing on the very narrow trail beyond.

At this point, there was definitely dropoff exposure to my left as I proceeded towards the falls. In a couple of spots, the ledges were wet, and I knew that this had the potential for a fatal slip-and-fall hazard (now I understood why perhaps some people have died here in the past). The dropoff exposure and slip-and-fall hazard was especially apparent on the last bend before the base of the Upper Kaaterskill Falls as the footing was made wet from the spray of the falls. Once I made it to the front of the upper waterfall, I quickly took photos and movies from this spot, then I returned back the way I came. I was simply too uncomfortable with the hazards here to linger much longer and take any more chances knowing there was the threat of rain and that the night time was approaching quickly.

Going back down was just as hazardous as going back up. So I took my time getting past the slippery ledges, then the rope-and-slope traverse, and then finally the steep descent back down to the official trail. Once I was back on the official trail, it was pretty smooth going as it was all downhill. So overall, it took me about 70 minutes to do this entire excursion, but the difficulty score reflected only the official trail portion of the hike. If I was to include the unsanctioned scramble to the base of the Upper Kaaterskill Falls, then I could easily bump up the difficulty score to a 3 or 3.5.

From Albany, we took the I-87 south towards exit 21 (about 34 miles from the toll stations at the I-90/I-87 interchange in Albany) for the town of Catskill. We then kept left onto CR 23B and Jefferson Heights Rd for the next 1.8 miles before turning right onto US 9W and followed it for the next 1.3 miles. Then, we stayed on Hwy 23A (leaving US Hwy 9W) and continued for the next 12 miles to the Forest Service car park on the left. This long stretch on the Hwy 23A passed through the town of Catskill, then eventually climbed up a series of curvy mountain roads.

Note that the car park was about 0.3 miles past the hairpin turn by the Kaaterskill Clove and the roadside cascade. The pullout here was said to be subject to fines though it wasn’t explicitly signposted as such from what we could tell. But then again, the lack of vehicles at this limited pullout on a trail that was so popular was already a red flag to begin with. Overall, this drive was about 49 miles total and it took us about an hour.

Left to right downstream to upstream sweep of the Kaaterskill Falls


Top down sweep of the upper waterfall before panning over to the view from above the lower waterfall, then finally showing the precarious and dangerous trail to get here 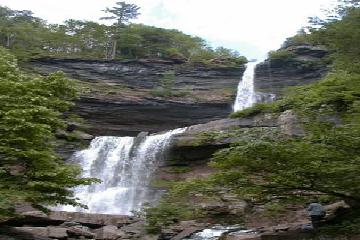 Kaaterskill Falls. January 3, 2010 8:21 am by Nicholas Lovett - The nicest waterfall I know in NYS is Kaaterskill falls in Ulster County in the Catskills. It's a two tiered waterfall with the upper falls 175 feet and the lower falls 85 feet. It's at the end of a short (maybe 1/4 mile) trail just off state highway 23A. It's very pretty, not too heavily… ...Read More