Our Take On The Books, Maps, Software, and Websites We've Used To Plan For Trips To New York

The purpose of this page is to reveal to you the resources that we have used both prior to and during our trips to New York. We have reviewed such resources so we can convey to you which ones we thought were most useful as well as those we didn’t find useful. Hopefully, this may better direct your information gathering efforts for your own trip…

Julie and I consulted this book prior to our first trip to the Finger Lakes area back in the early Summer of 2007. We needed a book like this because we were seeking out waterfalls that were reasonably close to Niagara Falls, and since we had a little less than a week to explore the Finger Lakes area, this was perfectly suited for the job. In addition to surveying a large assortment of waterfalls in the Western and Central parts of New York, we took advantage of their summary information contained for each waterfall writeup that quickly gave us a sense of the waterfalls’ height, jurisdiction, season, accessibility, hiking difficulty, etc.

Aside from one or two directional errors (probably because the road conditions changed), we also found this book had good use in the field as well as a trip planning resource. So the bottom line was that we liked this resource and we continued to use our copy of this book when we came back to upstate New York in 2013. I noticed there were now more waterfalling books concerning New York, but back in 2006-2007 when we first used it, I swore it might have been one of the few if not the only one available at the time, and it did a good job.

After having been used to the dysfunctional interface of the National Geographic Topo! CD-ROMs, I was relieved to find out that there was a Garmin Mapsource product for the Northeastern US (that also included New York as well as New England). It didn’t take long before I realized just what I was missing from those older maps that we had bought. Not only did it contain a similar level of detail (though I’m not sure if it had all the place names that the NatGeo Topos had or if they were just as many but in different places), but it also had that full functionality of trip logging and planning that I came to appreciate about the MapSource softwares that the NatGeo products had seriously lacked.

I was especially impressed to see the level of detail that included default waypoints for some places we were targeting like the Flume as well as Arethusa Falls, Bash Bish Falls, and more. Just the fact that there even existed waypoints of some pretty off-the-beaten path places as well as places that required walking meant that if I searched for them, I’d find them. That was a bit of a roll of the dice with the NatGeo software.

So even in an age of GoogleMaps where there might be plenty of disjointed waypoints and tracks from random bloggers, hiking clubs, business, and general info providers, this map is still necessary to get the rest of the USGS info that otherwise wouldn’t find its way onto Google. And for that reason alone, that makes this product very valuable. I know that little by little, these map products are being phased out, but I really hope that they stick around for a little while longer so I can buy up the other regions of the USA (or other countries for that matter) before such info is lost for good.

I know from seeing Amazon reviews that quite a few people have trouble with getting the product installed or used, but I can’t say I’ve had terrible difficulty in getting up and running with each MapSource product I have. Perhaps what’s more annoying is having to enter serial numbers or license info and connecting with their server (or hooking up a Garmin GPS product as part of the install process), where I fear one day I might get stuck having to re-install it only to find out that I can’t communicate with their server anymore (thereby rendering the product useless even though I bought it).

I noticed on the US 24k Northeast product, even though it had a sticker with the serial number on it, I didn’t recall ever being prompted at the install. So perhaps that already did away with this? I don’t know. But nonetheless, until the product is rendered useless, I still contend this is the most useful map product out there and only lags behind GoogleMaps in that the place name search capability may not be as extensive, flexible, nor up-to-date since GoogleMaps is constantly being added to as time goes on…

I bought this product way back in the 2006-2007 time frame when we thought we could capitalize on exploring a little bit of upstate New York before continuing on to Iceland that Summer.

Back then, it seemed like this was the only map product of its kind that let us look at New York with such detail at an incredible 1:24k scale with raster-based superpositions of scanned maps put together and digitized into this software. In other words, we were able to see down to the level of walking trails, campsites, bathrooms, and even specific buildings. And this level of detail was for the entire state, which I guess would justify the $100 price tag. So needless to say, we used this product extensively for both trip planning before our trips as well as trip logging both during and after our outings.

So we used this map for almost all of our mapping out of target waterfalls as well as approximate locations of our accommodations. We also utilized some degree of GPS logging and tracking though I did recall we were led astray around Letchworth State Park that might have also led to a flat tire, which we had to pay for with the rental car company.

So with all the benefits that we were getting from this map product, there were also plenty of drawbacks. The most glaring one was the really kludgy interface that made it a real chore to try to use our GPS for real-time tracking, or even try to annotate the map for figuring out routes and marking them before even going on the excursion itself. It took me a while to get the thing to work even though they had follow-up products for purchase to try to address this, but they turned out to be buggy and not very reliable (thereby a waste of time and money). So as it was, the map’s functionality was frustrating at best, especially when the more functional Garmin MapSource products started becoming more prevalent later in the decade (but not in time for our trip).

The bottom line is that this map product was excellent for hiking and backpacking (or at least planning for them), but was terrible for in-the-field navigation or track and waypoint management. We didn’t have much to go on besides this product at the time, but as the years went by, we actually ditched this product and went for the Garmin Mapsource product of the Northeast US when we came back to upstate New York in Autumn 2013. While I had some doubts about whether the MapSource coverage would be as extensive as that of NatGeo one, I think both products were drived from USGS Surveys so their differences should be very minimal… 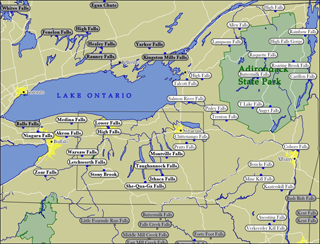 This website was one of the resources that continually came up when we were looking more into some of the target waterfalls of the upstate New York area. The navigation of this website was primarily through its own interactive map, which was pretty user-friendly and whose boldfaced capsules contained web pages devoted to that particular named waterfall.

So just by the map and interactive links alone, we were able to see the context of the falls immediately. But once we got into each of the waterfall writeups (which was primarily how the Google search got us to this site), we saw that each writeup had the summary boom box containing some of the falls’ stats as well as GPS coordinates before getting into the author’s blurb about the waterfall itself. There was also a photo gallery which also helped us quickly get a sense of what the waterfall looked like and perhaps a sense of what it might be like to visit it.