Alamere Falls is one of those waterfalls that will probably stay in our memories for a very long time.

When we close ours eyes to envision a waterfall spilling onto a beach, we can reminisce about our feet standing on coarse sand in front of this waterfall while waves crash against the beach behind us all under a warm afternoon glow.

And all that we hear are the crashing waves, the constant hiss from the tumble of the waterfall, ocean breezes, a few sliding pebbles and shale from the fragile cliffs nearby, and the occasional birdsong from gulls or other birds checking out the scene.

Well, as you can see from the photos and videos on this page, it’s a reality!

In fact, it’s within the Point Reyes National Seashore and it’s yet another scenically located waterfall tumbling onto a beach before rejoining the Pacific Ocean (the other notable one is McWay Falls).

And like McWay Falls, people have referred to these ocean-neighboring waterfalls as tidefalls.

There are actually several tiers of Alamere Falls.

It’s usually the bottommost tier (probably 40 or 50ft) that spills right onto the beach that people associate with this falls.

However, there are also several upstream cascades further upstream culminating in an attractive 15-20ft tier nestled up against more shale cliffs and usually fronted by wildflowers as well as poison oak and other shrubbery.

The catch to experiencing Alamere Falls is that you’ll have to earn this gem of a waterfall with a roughly 8.5-mile hike round trip.

The last half-mile consisted of a combination of brushing up against poison oak overgrowth, scary cliff scrambles, and a stream crossing.

But before you lament the trail itself, realize that it also offers gorgeous coastal scenery, wildflowers (in the Spring), gum trees, and even lakes!

All the times we’ve hiked this trail, it began at the Palomarin Trailhead on the southern end of Point Reyes National Seashore near the coastal town of Bolinas.

And on each of our visits, the trailhead had been full of cars. However, not everyone parked here were just visiting the falls as there were other beaches and backpacking campsites nearby amongst the network of trails on offer here.

Most of the trail was wide and seemed friendly to mountain bikers. In fact, we noticed a pair of mountain bikers on this trail on our second visit here. It appeared that some sections of the trail had remnants of concrete so I suspected that parts of it used to be a road.

After briefly going through a small grove of gum trees, the trail then opened up and provided gorgeous coastal scenery (that is, if it’s not foggy as it was the first time we did this back in 2004).

In some sections, the trail hugged the cliff that dropped directly below to the waves and beaches.

Since our visits came during Spring, we saw wildflowers coloring the landscape along the trail. This open stretch of coastal bluffs and wildflowers persisted for about the first mile.

Then, the trail veered inland away from the coast as it climbed before descending past a trail junction and towards the Pelican Lakes.

The first few lakes seemed more like serene ponds (some with lilypads on them), but as we went further on the trail, we saw the pretty big Pelican Lake itself.

The first time Julie and I visited this falls back in 2004, we encountered nude hikers on the trail around this area. However, the last time we were here, there weren’t any nude hikers, and we wondered if it had to do with the increasing popularity of this trail.

After getting past the lakes, the trail descended gently with distant views of the ocean once again.

Eventually at over 3.75 miles or so from the trailhead, we noticed a signposted junction for the Alamere Falls trail.

And it was here that we felt more comfortable putting on long sleeve jackets as the unmaintained spur trail (0.5 miles to the falls) required us to brush up against lots of overgrowth (including some poison oak).

Once we got past the overgrown part of the narrow trail, we then came to the top of a steep, crumbling gully that led to the upper tiers of Alamere Falls.

Depending on the flow of the creek, the stream crossing to get to the other side of it maybe easy or tricky.

Fortunately for us, both times we were here, it just required a short hop to get over the fast-moving part of the stream.

Once on the other side, we were able to see the main falls from its top as well its stream snaking through the beach towards the ocean below. That view motivated us to continue further and find a way down to that beach.

That descent involved another steep cliff-side scramble several paces north of the falls. That was where a dry gully narrowed into a steep, shale-covered descent onto the beach.

This scramble was steep enough to force both Julie and I to do the sit-and-scoot maneuver (not wanting to lose balance and take a nasty spill).

Both this scramble as well as the one just to get down to the plateau above the main falls were definitely not for everyone, but we thought they looked worse than they really were.

Still, we figured that if you’re reasonably fit (you must be if you made it this far already) and cautiously proceed on the scrambles, it should be doable.

That said, I do wonder over time how natural erosion (especially given how fragile the shale cliffs are here) might affect future access with all the weathering and wear. So far in the six years apart that we’ve visited the falls for our first two times, we were able to do them OK.

Overall, we probably spent on average about 5 hours to do the hiking, the photographing, and just basking in the rugged beauty that epitomizes what’s best about the scenery of the California Coast.

Alamere Falls resides in the Point Reyes National Seashore. For information or inquiries about the park as well as current conditions, visit the National Park Service website.

There are quite a few ways to reach the Palomarin Trailhead. However, I’ll just describe the driving directions from San Francisco since it’s the most obvious route that also paints the context of how far the drive is and how much time to allocate for it.

From the Golden Gate Bridge (US101), drive north on the freeway for about 4 miles to the Mill Valley / Stinson Beach exit (445B). Then, follow Hwy 1 for about 17 miles before turning left onto the Olema-Bolinas Road.

Follow the Olema-Bolinas Road for about 1.8 miles south, then turn right onto Mesa Rd.

Follow Mesa Rd to its end in about 4.5 miles. The last 1.3 miles is on unpaved road, and it has some fairly deep potholes and ruts. So I’d recommend taking it slow on this road or risk damage to the alignment and other aspects of the drain train of your vehicle.

Overall, this 33-mile drive takes about 90 minutes depending on traffic. 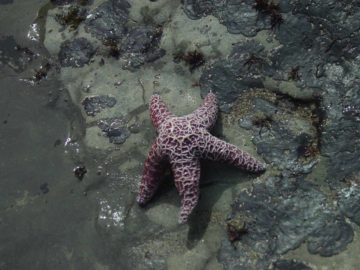 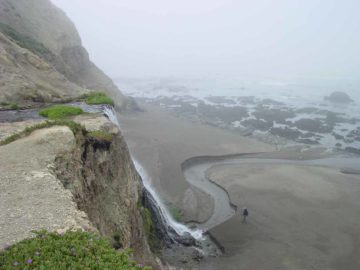 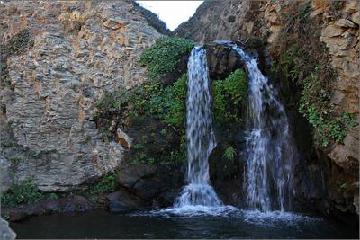 Alamere 2017 October 31, 2017 2:37 am by Ken Papai - Visited the falls last week, Oct. 27, 2017. FANTASTIC. Mountain Bikes are illegal on the Coastal Trail from Palomarin trailhead to the unmarked and unsigned falls trail and beyond. Just spectacular! -Ken Papai ...Read More