Lower Calf Creek Falls was one of those desert surprises that really made us wonder how such a harsh and arid environment could harbor such a lush and lovely oasis.

It was a gorgeous and colorful 126ft waterfall sitting in a very peaceful cove at the head of Calf Creek Canyon. The green and yellow colors that lined the contours of the column of water came from algae growing on the sandstone that thrived on the falls’ miraculous year-round flow.

To us, this was probably the highlight of the vast Grand Staircase National Monument. This was especially the case given how much the whole family enjoyed the excursion (including the kids).

In fact, the kids really enjoyed playing in the cold plunge pool at the waterfall’s base.

In order to get to Lower Calf Creek Falls, we had to earn it with a bit of a long and deceptively tiring, sandy, but mostly flat 6-mile round-trip hike.

Given the harsh environment of the desert, I’d recommend getting a pretty early start to minimize exposure to the desert heat. In fact, each time we were here, we started at as early as 7am or as late as 9am (when we brought kids along for this hike).

The early start had the added benefit of hiking in relative solitude while being one of the first (if not the first) people at the falls. It also meant that the morning sun would shine directly on the falls, which really brought out the colorful sandstone wall underlying the waterfall itself for great photographs.

After parking the car within the day use lot of the Calf Creek Recreation Area (see directions below), we then walked about 300 yards going past some of the first-come-first-served campsites before reaching the trailhead register and trail (just before the road went through Calf Creek via a concrete ford).

At the trailhead, I recalled we picked up a paper brochure that basically contained interpretive literature that was keyed to signposts throughout the trail. For example, near the start of the trail, there was an area of tall grass that was said to once be a watermelon patch.

Right off the bat, the trail started off sandy with a few stretches of sandstone or slickrock surfaces. When we first did this hike back in 2001, we had to watch for rock cairns (stacks of rocks) to help us navigate through those sections where the trail wouldn’t be as obvious.

In our latest visit in 2018, the trail seemed to be much more obvious to follow and the rock cairns weren’t as prevalent.

The sandy parts of the trail made it so that each step wasn’t as efficient as we’re used to as some of that forward momentum was lost in the sand. Thus, we had to work a little harder step for step in those sandy stretches.

That combined with the desert heat (which we faced back on our first visit here in June 2001) along with low humidity meant that we often found ourselves drinking lots of water while getting a good workout.

With kids coming along, we had to bring extra water since they generally didn’t appreciate how quickly the desert conditions can wreak havoc on the body.

As we proceeded along the trail, the interpretive numbered signposts spread out along the trail helped to keep our minds off the long sandy hike. Quite a few of the signs discussed various aspects of Calf Creek Canyon from the history to some tidbits regarding the ecosystem here.

However, at about the half-way point of the hike (by the signpost 8 as of our latest hike in 2018), we spotted Native American pictographs across the canyon. Although they were easily seen with the naked eye, a pretty powerful zoom lens was needed to bring them in close enough to fill the frame properly.

The pictograph depicted a trio of figures looking somewhat robotic or spiritual. According to the literature, their meaning remains unknown though the style of the pictographs suggested that the Native Americans of the Fremont area were responsible.

A ranger told us that there were actually more pictographs nearby in addition to the obvious three figures, but I had trouble spotting them.

Beyond the pictographs, there were other Native American artifacts or traces sprinkled about Calf Creek Canyon.

In one such example, there was evidence of granaries perched high on the cliff walls of the canyon reminding me of how resourceful Native Americans were in seemingly inaccessible places like in Mesa Verde or even in the Andes Mountains of Peru.

The further along the trail we went, the tall sandstone cliffs were closing in to the point that the trail eventually skirted Calf Creek.

The combination of surprisingly lush vegetation (getting their moisture from the perennial stream) with the tall sandstone walls (providing some welcome shade) gave us the second wind needed to propel us along the latter parts of the hike.

Eventually, we’d reach the pretty Lower Calf Creek Falls, which plunged over the imposing and impassable canyon walls marking the turnaround point of the hike.

The oasis-like cove was a great place to wade in the very cold plunge pool to offset the desert heat. The colorful algae behind the falls combined with clear blue skies really made this waterfall photogenic.

And even though there were dozens of people when we were here on our latest visit in 2018 (we made it after about 11:15am), the amphitheater still didn’t feel crowded.

We easily spent an hour or more just basking in the miracle of Nature here as well as letting the kids enjoy the fruits of their labor in making it here. Indeed, this was one place where we could’ve lingered for quite a while longer if we wanted to.

The return hike went quicker than on the hike in. This was mostly because the elevation profile was now predominantly downhill though the hills were barely noticeable.

When we returned to the car, at least 4 hours had elapsed. I’d imagine you could spend less or more time away from the car than we did depending on pace and how much time you linger at the falls.

Finally, note that the name of this waterfall – Lower Calf Creek Falls – implied that there was another waterfall on Calf Creek. Indeed, there was one, but that would require starting from a separate trailhead and proceed along a different trail. You can read about that excursion here.

There was no official way to link the two trails that I’m aware of.

Lower Calf Creek Falls resided in the Grand Staircase-Escalante National Monument. For information or inquiries about the reserve as well as current conditions, visit their website.

Lower Calf Creek Falls was located between the towns of Escalante and Boulder right in the heart of the Grand Staircase National Monument. We’ll describe the driving directions from Escalante since that was how we did this drive.

From the town of Escalante, we drove east on the UT12 for just under 16 miles. This stretch of road passed through a wonderland of sandstone and slickrock formations (some of them very reminiscent of Jabba the Hut in the various Star Wars movies

). There were a few signed pullouts allowing us to take in the views along the way.

After passing the Escalante River, now long thereafter, we reached the well-signed turnoff on our left for the Calf Creek Recreation Area. A short descent further, we reached the day use parking area between a fee payment signboard and restroom facility. The day use fee per vehicle was $5 using the pay-and-display system. However, as of our latest visit in 2018, our Interagency Pass (formerly the National Parks Pass) and Mom’s Golden Age Pass were both accepted here, so we just had to display them in our parked vehicles to be exempt from the cash fee.

Note that if we were coming south on the UT12 from Boulder, the right turn into the Calf Creek Recreation Area was a sharp turn. Therefore, long vehicles like RVs or trailers were prohibited from making that turn directly.

Finally, if you come later in the day (say late morning or afterwards), we’ve seen the parking lot overfill and parked cars spill onto Highway 12. I’d imagine that you’d have to find space on the shoulders of the highway then walk towards the Calf Creek Recreation Area and trail if you’re faced with this situation. 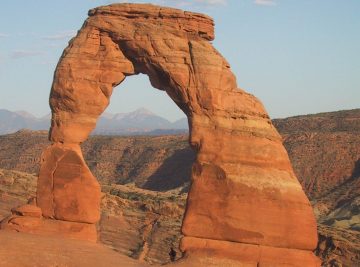 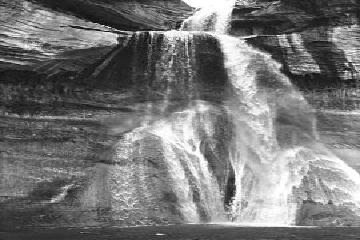 Favorite childhood spot 40 years ago (Lower Calf Creek Falls) February 22, 2014 8:38 am by Dan Wright - My family often went camping in southern Utah when I was a kid in the '70s. At that time, few people knew about Lower Calf Creek Falls. We backpacked the short distance in, set up small tents, and stayed overnight, falling asleep to the sound of the water. It was a favorite childhood memory, and… ...Read More