Maruia Falls was one of the few wide river waterfalls that we were able to experience somewhat closely from its bottom. The other waterfall that came to mind in this category was Raukawa Falls on the North Island, but that one only let us see the falls from a distance. In any case, this roughly 9-11m tall waterfall was said to have grown 8m after the Murchison Earthquake in 1929 when a landslide diverted the watercourse towards an old riverbed (elaborating further upon one of our books saying the riverbed lowered by 8m after the earthquake). So given its drop, it was said to be a pretty runnable kayak though we didn’t see it during our visit in late 2009.

Given that this waterfall sat on the Maruia River, I didn’t think we needed to worry about its flow year-round. From the well-signed roadside car park, our visit was a breeze as we were able to briefly walk to a couple of viewing spots. The first one was near a picnic area overlooking the top of Maruia Falls. A second way of experiencing the falls was at the end of a short walkway that led us down to the banks of the Maruia River where we were able to see the falls as you see pictured at the top of this page.

With the gray and overcast conditions, the falls actually blended in with the rest of the sky. So while our photos weren’t remarkable under such conditions, we did notice a handful of people who did some off trail scrambling to get up to the very brink of the waterfall. They provided a nice contrast to the falls in my photos as well as provide some sense of scale of its overall size. I did entertain the thought of doing what they did, but I ultimately decided against it.

From the SH6 and SH67 junction in Westport, we drove on SH6 for about 80km east to its junction with SH65 in the Buller Gorge near Murchison. We then headed south on SH65 for just under 11km to the well-signed car park on our right.

Going in the other direction, the signed car park for Maruia Falls would be on the left of the road heading north on SH65 about 65km north of Springs Junction. See the Five Mile Creek Falls page for directions on getting to Springs Junction from Christchurch or Greymouth.

Beautiful Spot But Can Be Deadly (Maruia Falls) October 2, 2011 11:53 pm by Jordan - I have been to these falls, and witnessed some kayakers going over the falls, which I thought was fool-hardy, but they seemed to do it just fine. It is a beautiful spot. However, just last weekend in the news a man died there after climbing over the safety barriers and then slipped into the water.… ...Read More 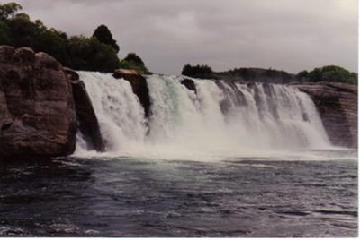