Skogafoss (or more accurately Skógafoss; “SKOH-ga-foss”) probably rivals Gullfoss as Iceland’s most famous waterfall. This was a classically-shaped rectangular waterfall that dropped 60m with a width of 25m, and it was this feature that prompted Julie to call this her favorite waterfall in the country. Adding to its allure was that it had a high volume of water making it thunder and produce rainbow-yielding mist that often would make this falls a photographer’s dream under sunny skies.

Perhaps a major reason why the falls was so popular was that it was very easy to access. Thus, it wasn’t surprising to see lots of people as well as tour buses. The presence of camping also helped its popularity, I’m sure. But it was a very flat and tame scramble along the river’s banks that led us right up to the wall of water. Getting so close to the base of such a large waterfall was quite rare in our waterfalling experiences.

The official path climbed alongside the cliffs surrounding the recess containing the falls to yield precarious top down views of not only the waterfall but also the view towards the Atlantic Ocean as well. This trail also continued further up the Skoga River where there were many more waterfalls.

During the three days we were staying in Skógar, we were hoping for a little bit of morning sun so we could get that classic photograph of the falls with a rainbow. Unfortunately, we were pretty unlucky with the weather and we never got that nice photo of Skogafoss with blue skies and bold rainbows. Maybe better luck next time…

Finally, I looked up my Icelandic dictionary to try to learn the meaning of the name of this waterfall, and it said that “skógur” meant “forest”. If that’s the case, then this would be “Forest Falls”, but given the lack of trees in the area during our visit, it might suggest that perhaps the area once did harbor a forest (something we only saw in East Iceland).

Look for this easy-to-spot waterfall by the hamlet of Skogar along the Ring Road about 105km east of Selfoss (the town) and 103km west of Kirkjubæjarklaustur. There should be ample parking.

For additional context, Selfoss was 52km east of Reykjavík. Overall, the drive from the country’s capital to the falls would be about 149km or 2 hours. 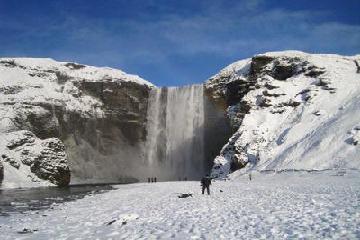