Sentinel Falls is what I’d consider one of those second-tier seasonal waterfalls in Yosemite.

What I mean by “second-tier seasonal waterfalls” is that these are more substantial than the ephemeral waterfalls like Horsetail Falls.

However, they’re not in the class of Cascade Falls.

I’d say it’s a little bit below Ribbon Falls in terms of waterflow.

Anyways, I suspect this waterfall got its name from its proximity to the giant monolith (known as Sentinel Rock) towering over it.

The falls is said to have over 2,000ft in cumulative height as it drops over multiple steps on its way from its source by Pothole Meadows (near the Glacier Point Road) to the valley below.

Speaking of the source, the waterfall is best seen during the peak snowmelt period, which typically happens in the late Spring.

However, over the years, we’ve seen how snow pack levels affect both the timing and the vigor of the falls. So it’s conceivable that peak flow could happen as early as late March or as late as early June.

If I had to guess when the best time to see the falls would be given the fluctuations in snow pack levels, I’d reckon the statistics would favor May as the time to see it flow reliably.

Sentinel Falls resides in Yosemite National Park. For information or inquiries about the park as well as current conditions, visit the National Park Service website.

Since this waterfall sits in Yosemite Valley, there are many ways to experience it. We’ll briefly break down how we’ve been able to experience Sentinel Falls. For a little context, we generally arrive at the valley from Los Angeles by taking the I-5 north then the Hwy 99 north to Fresno. From there, we take the Hwy 41 north through Coarsegold, Oakhurst, Fish Camp, etc. through the South Entrance of Yosemite and ultimately to the valley via Wawona. This drive would typically take us around 6 hours (without traffic).

The most obvious place to view this waterfall was at the trailhead for the Four-Mile Trail at signpost V18 along the Southside Drive. From the pullout here, the area was open enough to be able to see the falls along with Sentinel Rock without too many trees getting in the way.

For a different and much quieter view of the waterfall, we went to Leidig Meadow, which was accessed from the Northside Drive west of Yosemite Lodge. We managed to spot a trail that went into the wooded meadow with sporadic opportunities to get more direct views of Sentinel Falls that most people probably overlook since this trail didn’t seem to be very well-used. As a matter of fact, we weren’t able to spot any formal car parks or pullouts near this meadow, which probably explained why it was so quiet here. I actually had to find an informal pullout beside Northside Drive as I went west of Camp 4. Then, I had to walk along the road until I found a trail I could take into the meadow itself.

For a more elevated perspective of Sentinel Falls, that came from the trail to Upper Yosemite Falls, which began near signpost V5 just by Camp 4 on the Northside Drive. I started to get views across the valley in about a mile into the hike.

Finally, I managed to experience this waterfall near its brink along the Pohono Trail. The issue with seeing the falls this way was that I had to crawl on my belly and peer over the cliff’s edge down at the cascading waterfall. Needless to say, this induced intense butterflies in my stomach as there wasn’t much real estate between my body and gravity threatening to plunge me over a thousand feet below! To get here, I started on the Sentinel Dome and Taft Point trail at signpost G8 on Glacier Point Road, then I found my way to the Pohono Trail, which links both the Taft Point Trail and Sentinel Dome Trail on the other side of Sentinel Dome. This trail crosses Sentinel Creek, and that was where I found a detour that took me right to the cliff’s edge near the brink of the falls. It’s definitely NOT for those with acrophobia.


Bottom up sweep from the relatively unknown Leidig Meadow 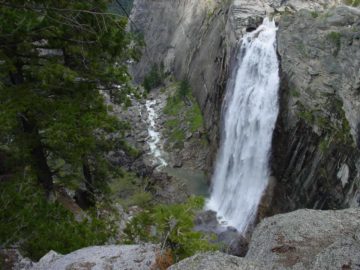