Vettisfossen was certainly the main waterfall of the Utla Valley (Utladalen). At least that was what our pre-trip research impressed upon us so it was pretty much the must-see waterfall of the hike into the valley. What made this waterfall stand out was that it was said to have a freefalling drop of 275m making it the tallest unregulated free-falling single-drop waterfall in Norway. But in addition to this big waterfall, we also saw Hjellefossen, Avdalsfossen, and many others with and without names along the way. Indeed, we must give kudos to the authorities who managed to exercise constraint in not exploiting this area and instead protecting it since 1924 (despite hydroelectricity being the main source of power in the country).

In order to access this waterfall, Julie and I had to earn it with a long hike of about 6km in each direction (or 12km round trip). It took us a little over 4 hours to do the entire out-and-back hike with some rest and photo breaks. Even with the time and physical exertion invested, the hike didn’t seem as long as we thought because there were those other aforementioned waterfalls along the way.

Shortly after our visit to Hjellefossen, we arrived at what appeared to be the official car park for the public (see directions below). There was a gate right before a bridge, and it appeared that further vehicular progress could only be made by residents. So this was where we got out of the car, crossed the first bridge, and started walking along the local road.

About 600m from the trailhead, Julie and I spent some time at the Utladalen Naturhus, which was basically an exhibit showing some artifacts of the history (both geological and cultural) of the area. We also spent some time reading signs and maps here so we knew very well what we were signing up for regarding this hike. I also recalled that there was a cafe here though we didn’t take advantage of it.

After leaving the Utladalen Naturhus, we crossed another bridge, and then we pretty much continued following the unpaved local road alongside the Utla River. It felt strange hiking on a local road knowing that every once in a while, vehicles would pass by. In any case, after about 1km into the hike (or 15 minutes from the trailhead), we started to see the impressive 173m Avdalsfossen.

The trail passed before the falls from across the Utla River so we were able to view it from a variety of angles from a distance. There was enough spray generated from the waterfall that we even felt some sprinkles from the trail itself, which wasn’t exactly that close to the waterfall! We could appreciate the size of the falls because we saw there were power lines running alongside the Utla River being dwarfed by the falls itself.

As the falls started to leave our view, Julie and I noticed a spur trail that steeply ascended towards the top of Avdalsfossen. This spur path ultimately would lead up to the historic 16th century Avdal Farm (Avdal Gard), which was said to be recently repurposed for tourism in 1991. Since we didn’t go up this spur path, we can’t say more about it though I’d imagine there ought to be more unusual views of the impressive Avdalsfossen on the way up. We also had read that the farm kept animals as well.

Beyond Avdalsfossen, the hiking trail and road passed through some landslide zones as well as over a few more bridges. I recalled that there was one bridge where we had to open and close the gate before it (though we had originally thought we might have run into a private road or that the path was somehow closed). Roughly about 30 minutes from Avdalsfossen, we encountered a short but powerful waterfall on the Utla River itself, which we would later find out that it was named Høljafossen (also called Hyljefossen). The large plunge pool looked inviting for a swim, but it was a pretty cold and overcast day during our visit so we didn’t see anyone go in there.

Nearby Høljafossen, we saw a signposted path that said “sti til Vetti” (path to Vetti). We opted to stay with the road instead of this path, but from looking at the maps, this seemed to be a foot-only trail to the same remote hamlet. Roughly 20 minutes of hiking beyond Høljafossen, we finally made it to the tin-roofed homes of Vetti. Along the way, we saw a series of waterfalls coming down the mountain across the Utla River, which was quite a sight to behold. I believe those waterfalls were coming from the brooks Nonsbekken, Nybekken (the New Brook), and Storebekken (the Big Brook), respectively.

As we passed through the hamlet of Vetti, we paid attention to arrowed signs and red Ts. We’d eventually go alongside someone’s home before we then had to descend a very steep path that dropped down towards the level of the river. There were some hoses or colored rope to hold onto to help with our balance on the descent. But once we were at the level of the river, the path flattened out once again and we’d ultimately arrive at the Vettisfossen Waterfall about a little over 30 minutes of hiking from the Vetti village.

As Julie and I near the base of Vettisfossen, we realized that we were only able to view the upper portions of the falls. The bottommost sections were blocked from our sight by protruding cliffs. I was real tempted to get my feet drenched by crossing the rushing stream on the rocky streambed then scramble my way upstream closer to the falls. However, I decided against it given how quickly the currents were moving. Thus, we had to be content with the view you see at the top of this page.

While Julie and I were a little fatigued from all the walking just to get to this point, we didn’t consider (actually we had forgotten about) an attractive alternate trail that led up to the top of Vettisfossen. This trail was said to leave from the hamlet of Vetti up a steep path that was said to allow for some top-down views of the falls. Since we didn’t try this on our late June 2005 visit, it might be something we would try next time…

Follow the directions given on our Hjellefossen page then continue another 400m along the Utladalsvegen county road beyond that waterfall. The road will end at a car park meant for public day use. Even though the road continued to descend towards the river, it was meant for residents. There was a supervised barricade ensuring any non-residents could not proceed further. So that was where the hike began.

Norway 1970 (Vettisfossen) February 5, 2009 4:04 pm by Linda Appleby - 'an hour later found us in the only pasture in the Vetti mountains, or so it seemed. We all sat down for a rest and the sun came out. It was lovely. I took off my cycle cape and we set off again. The scenery was : trees, grass, streams. What a change! We followed… ...Read More 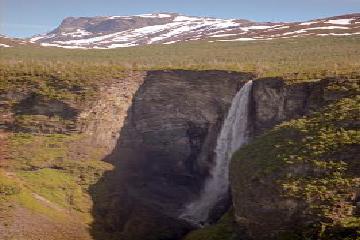 Vettisfossen from above February 6, 2018 4:33 pm by David Gilmore - It's already a long walk to the base of Vettisfossen, but better views can be had by taking the bridge across the main river before you reach the base of the falls and then hiking up a long, steep trail that goes high up above the fall on the other side of the valley to… ...Read More 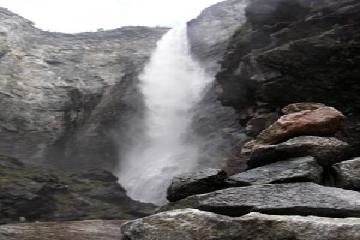 Vettisfossen Cairn January 13, 2011 10:18 pm by Mark Rutter - Hello there, Have been admiring your site and the huge amount of waterfalls you and your wife have managed to tick off around the globe - very impressive, well done guys. My wife (Karen) and I enjoy getting our feet wet too and enjoyed many happy times in Yosemite a couple of years back. Last… ...Read More