Malselvfossen (Målselvfossen; “MOHLS-elv-foss-un”) was a waterfall that Julie and I made a spontaneous stop for after noticing some signage as we were driving north along the E6 from Narvik towards Storslett. We noticed that there was quite a bit of infrastructure around this waterfall, which seemed to be really more like a series of rapids than a singular obvious waterfall. In any case, the falls was said to be 22m high over a length of 650m. And it provided us with an opportunity to enjoy a waterfall while getting some stretching and resting done before continuing on the long drive further to Norway’s far north.

I had read that Malselvfossen was once considered to be Norway’s national waterfall. I was a little perplexed and unclear as to why that was the case. However, it could very well be because it was said to have historically produced large yields of salmon, which was a very important means of sustenance in this part of the country. And given the presence of some fish and tackle supply shops in the built-up car park area (see directions below), I believe this place was still a popular fishing spot. Even the signage that got our attention along the E6 certainly attested to the importance of this waterfall.

Julie and I went on a walk from the large car park, where we followed a well-used path skirting alongside the Mål River (Målselva), which ultimately ended alongside Målselvfossen. Even though we already started to see the falls in its context near the start of the walk, I reckoned we had a better look closeup along this walk. And as a bonus, we also got a closer look at the salmon ladder allowing the laks to bypass this waterfall and rapids so they could continue further upstream. It took us no more than 15 minutes to both walk to and view the falls.

Since Julie and I arrived at Målselvfossen from Narvik, we’ll describe the route from that city (even though I’m sure there were other built-up cities or towns closer to the falls).

From Narvik, we drove about 110km northeast along the E6 until we reached the junction with the Route 87. By this time, we had seen at least one or two signs for Målselvfossen, which probably got us to go ahead and make a detour to visit this falls instead of continuing further north to Storslett nonstop. Anyways, we turned right onto the Route 87, then we followed it for about 8km to a three-way intersection. Following the signs, we then turned left where we then drove another 3km to the built-up car park for the falls.

It was worth noting that another 9km north of the E6/Rv87 turnoff was the town of Andselv, which also had its own neighbouring river waterfall called Bardufossen (which we missed).

Nils Foshaug (Målselvfossen) October 8, 2008 3:24 am by Jim Tata - Malselvfossen is the most beautiful place on earth. I spent time there with a local expert named Nils Foshaug. His knowledge of the area was excellent, and he made the history of this special part of northern Norway come alive. ...Read More 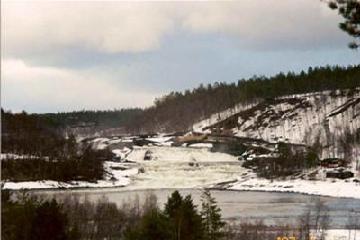 Ken Foshaug (Målselvfossen) December 15, 2008 2:40 am by Ken Foshaug - My last name is derived from this area of Norway. Foshaug - Fos meaning waterfall and haug meaning hill. My Great-great-great grandfather moved from southern Norway to the Malselv valley in the early 1800's and built a homestead on the hill northwest of the [Malselv waterfall] - hence the name derivation. I traveled to this… ...Read More