About Akaka Falls and Kahuna Falls

Akaka Falls is a spectacular 420ft (though I’ve also seen 442ft reported as its height) waterfall and is certainly one of the most attractive of the accessible waterfalls on the Big Island. Not only that, but it also placed high on our Top 10 List of Hawaii’s Best Waterfalls.

Usually, waterfalls this tall and gulches this steep remind me of the type of scenery we normally associate with inaccessible terrain seen on helicopter rides. So it didn’t surprise me at all that it was popular, and I would certainly consider this waterfall a must-see attraction. Given that it was that rare Hawaiian waterfall that welcomed visitors as it sat within its own state park, there really wasn’t an excuse not to see this wonder!

Speaking of the Akaka Falls State Park, that meant that there was infrastructure in the form of a well-developed loop trail as well as a fair-sized car park. The road to get here was also smooth and easy to drive with a possible view on clear sunny days of the peak of Mauna Kea (one of the twin shield volcanoes comprising the Big Island) and the Keck Observatory at its summit.

Upon our visits to the falls, we did what the majority of visitors here would do, and that was to go left (clockwise direction) to head straight for this waterfall first. This route that was signposted to be about 750ft long passed by some smaller cascades before getting to the viewing area overlooking a very large bowl-shaped amphitheater into which the falls tumbled. There was also a little shelter as well where we noticed someone peddle their wares to tourists.

We noticed that most people didn’t bother doing the whole loop and turned back at this point. However, we continued with the loop walk another 800ft towards the Kahuna Falls, which was another waterfall in the state park that seemed to be just as tall as Akaka Falls.

Once we got to its overlook, we could see why this waterfall was overshadowed by its famous counterpart. While Kahuna Falls seemed to also be about 400ft tall or so, our view of it was limited to an angle that only showed the waterfall’s profile. Thus, the watterflow had to be big enough to overshadow the trees growing on the cliffside in front of it to be satisfactorily seen. I’m sure that if this waterfall had been given a more direct view, then perhaps it would’ve gotten just as much fanfare as Akaka.

On a separate occasion, Julie and I saw both these waterfalls by helicopter, and that further reinforced our hunch that these were almost like twin waterfalls.

From the Hwy 19 and Hwy 11 junction by the Hilo Airport in Hilo, take Hwy 19 north for about 20 minutes to the well-signed, mauka-side turnoff for Hwy 220 (west). The Hwy 220 turnoff is between the 13-mile and 14-mile posts. Follow the Hwy 220 signs through Honomu Town, after which the last three miles are wide open spaces (that were sugarcane plantations during the Hawaiian sugar trade heydays of the late 19th and early 20th centuries).

As mentioned earlier, one time when we drove the Hwy 220, it was a clear day, and we were able to see the summit of the Mauna Kea volcano on the drive up towards the falls. Anyways, continue on Hwy 220 all the way until the forested mountains close in and the road ends at the busy Akaka Falls car park. Overall, this 16-mile drive would take about 30 minutes. 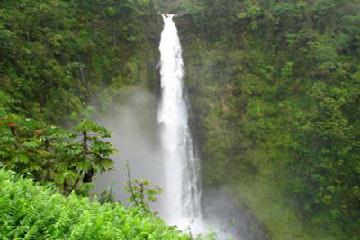