The Edessa Waterfalls (written as Eδεσσα in Greek) was the lone waterfall excursion our 2010 visit to Greece. It was really a series of waterfalls (seven according to the literature though we didn’t see anywhere close to that amount), which among them consisted of the so-called Great Waterfall (called Karanos) and the Twin Waterfall (called Diplos or Dihalotos) according to the signs and the literature that we picked up. It was this multi-waterfall nature of the attraction that prompted my use of the plural in the waterfall name on this page.

Said to fall from a height of 70m in total, the Edessa Waterfalls were definitely the main attraction of the Edessa town. And in typical Greek style, we knew that we were never far from history so it turned out that the city neighboring the falls was said to be founded since pre-historic times. However, the current relics of the walled city probably came about since the 4th to 6th century BC.

According to the literature here, the rushing waters of the river Edessaios might have played a role in reinforcing the protection of the city during its evolution over time. Julie and I noticed signs for archaeological sites around town, and we’d imagine that it was such places where it was possible to learn more about the history and evolution of Edessa (though we didn’t get to a chance to visit those archaeological sites).

Given the country’s reputation for having very hot Summers (with a relatively dry Mediterranean climate said to be very much like what we get at home in Los Angeles), it was amazing that this was a rare year-round waterfall with high flow. Thus, it’s said that even in the Summer, Edessa can be refreshingly cool from the mist generated by the waterfalls.

Julie and I visited Edessa in late May 2010 on a year when most of Europe was seeing unusually high rainfall. So the falls were gushing possibly to the extent that its flow might have been well above average.

This fact made things a bit tricky when we wanted to see more than just the Great Waterfall (Karanos), which itself was very easily accessible with plenty of overlooks and stairs (for getting decent views of its main drop as well as getting behind the falls).

However, the footpaths that led directly to the Twin Waterfalls called Diplos were closed during our visit. So that left us with a rather intensely misty descent down a poison-ivy-lined path full of slippery steps across the base of Karanos and towards a bridge between both Karanos and Diplos.

I got the feeling that the slippery and wet conditions were a result of the high flow thanks to the unusually rainy early Summer that we had experienced on this trip, or if it was pretty normal for this time of year.

Anyways, for the price of getting a serious drenching, the payoff was that I finally got my only glimpse of the Twin Waterfalls from its bottom. We weren’t sure why the more direct footpath was closed, but I’m sure they’ll re-open at a later date than our visit to spare the soggy adventure.

At the very top of the falls, it appeared that they diverted part of the stream into an attractive garden complete with mini waterfalls, footbridges, and of course flowers. Meanwhile, it appeared that other parts of the stream were funneled into channels rushing between buildings as well as a cafe. Thus, we found plenty of ways to spend a couple of hours or so here even though visiting the waterfalls themselves was pretty quick and straightforward.

Finally, based on some photos that I’ve seen in the literature, the Edessa Waterfalls are apparently floodlit at night. Perhaps one of these days, we might spend an evening here to witness the effect while also affording us a little more time to visit the historical ruins nearby as well.

Edessa is roughly 100km west northwest of Thessaloniki in the Pella Prefecture of Macedonia in Northern Greece. It took us about 90 minutes to get there while driving along Hwy 2 for most of the way (and this included having to wait for a long time for an opportunity to pass a caravan of large trucks on a busy two-lane highway). Fortunately for us, there were plenty of signs within Edessa town leading us to the waterfalls so we didn’t have too much difficulty at least getting fairly close to the falls.

Although we weren’t sure if we parked where most tourists would park, we did find street parking in front of a line of shops and vendors as it was relatively quiet on the day we were there. Nonetheless, there were signs for parking that I’d imagine would provide more space and would be more accommodating for a busier time.

Once we parked, we basically walked towards a park-like area within earshot of the rushing Edessaios River. From the Tourist Office sitting within the park, we followed the rushing channels downstream past the cafe and ultimately towards the overlooks and walkways leading to viewpoints of Karanos (the Great Waterfall).

For context, Thessaloniki was 541km (5.5 hours drive) north of Athens.


Deliberate bottom up sweep from behind the main waterfall 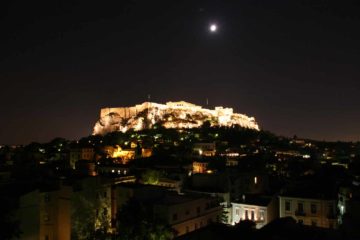 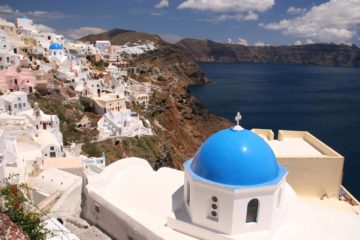