Monrovia Canyon Falls was a pleasant two-tiered 30ft waterfall in the foothills of the San Gabriel Mountains near the suburb of Monrovia.

Presenting another little getaway for Angelinos like us, we were pleasantly surprised that it was flowing as well as it did late in the Summer (I think around August 2001) when we first visited the falls. It even flowed fairly well on a visit in April 2014 when we were in the midst of a third straight year of drought, further attesting to its resiliency.

In fact, the creek responsible for this waterfall manages to avoid the evaporative Southern California heat by flowing underneath the surface to emerge as a spring unseen further upstream deep in the San Gabriel Mountains.

Therefore, this waterfall was actually said to flow year round, and in this instance, we believe it!

Indeed, this property was something that was quite rare for Southern California waterfalls given its relative lack of rainfall and hot, sunny days for most of the year. We think this fact alone made this short waterfall well worth visiting.

The trail to the falls was a pleasantly shady, gently uphill hike for 3/4 miles (or 1.5 miles round trip).

Along the way, we passed by a handful of manmade dams and some narrow, minor cliff-hugging spots.

Over the years, we definitely had to pay a bit more attention to the narrowness of the trail as well as the dropoffs as we made visits with our little daughter. But for the most part, this was one of the easiest hikes to do, and we witnessed plenty of seniors, other toddlers, as well as locals walking their dogs while doing this trail.

To further illustrate how much confidence we had in doing this trail, Julie and I took our daughter to this waterfall when she was four months old. We then did it with her when she was 15 months old, and once again when she was 3 years old.

On the visit when our daughter was three, she managed (actually insisted) that she do the hike all by herself! She even refused to hold our hands around some of the narrower parts of the trail.

Probably the hardest thing to do regarding an excursion here would be to find parking, which can be an issue if you’re not an early bird. We knew that the hard way on a couple of our visits.

It wasn’t surprising to see people marauding the narrow car park waiting for people to leave so they could snatch those hard-to-get spots. That said, it was also possible as a last resort to park at one of the lower lots (even near the payment kiosk) or as far as the residential areas further down the hill.

The only drawback for those last options was that the hike would be prolonged depending on how far away from the trailhead the parking would be.

In any case, each time we made it to the main car park and trailhead area at the top of the road, we never forgot to check out the view of the Los Angeles basin from the lookout there.

For a little orientation, Monrovia Canyon Falls sat in the city of Monrovia, which itself was directly east of Pasadena along the 210 Freeway or generally northeast of downtown Los Angeles.

We accessed the falls in a couple of ways. Recently, we found that the most straightforward route was to take the Mountain Ave exit shortly west of the I-210/I-605 junction in Duarte along the I-210. We then turned right onto Mountain Ave and followed this road past a few traffic lights up to Foothill Blvd. Turning left onto Foothill Blvd, we then drove west towards the light at Canyon Ave. Turning right onto Canyon Ave, we then drove up the hill through the residential area (eventually starting to see the Fountain to the Falls signs) before veering right as Canyon Ave continued onto a winding mountain road leading up to Monrovia Canyon Park.

The road eventually led to a manned kiosk where we paid $5 (as of 2014; Forest Service Adventure Passes weren’t honored here) to park in any of the lots starting from the kiosk area all the way up to the top of the road. In all of our visits, we tended to park at the very top of the road though it wasn’t always easy as the parking situation can be stressful given how popular this place was and how many limited parking spaces were available.

The trailhead was at the car park at the very end of the road though there was also a separate trail linking the lower car park and cabins with the trail to the falls just below the trail from the main picnic area.

Alternatively in the past, we often accessed Monrovia Canyon Falls by taking the I-210 to the Myrtle Avenue exit (west of Mountain Ave exit).

Checking out the falls together 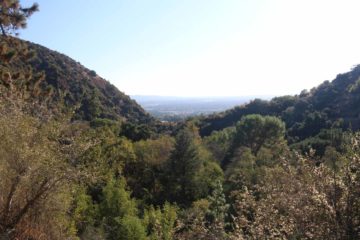 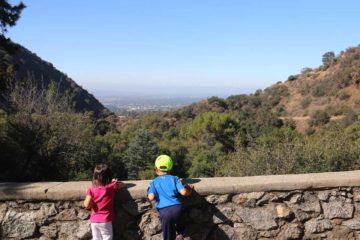 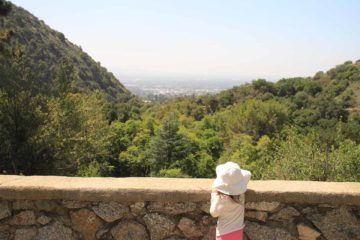 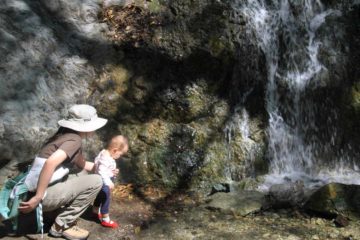 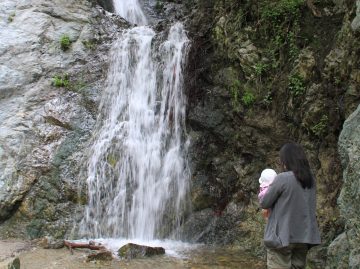 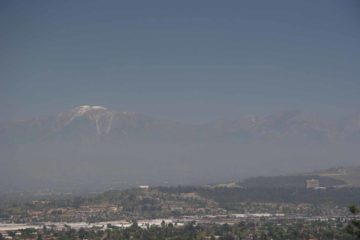