The Biausevu Waterfall (also known as Savu Na Mate Laya Falls) is a pretty 20m waterfall on the Coral Coast of southern Viti Levu near the Biausevu village.

The waterfall slides down in two tiers. In between the tiers, it looked like the stream actually launched in a small waterwheel before making its final descent. Given its accessibility and shape, we thought this was one of the more impressive waterfalls that we saw in Fiji as well as one of the highlights of our time in the country’s main island – Viti Levu.

Although we saw organized tours that offered to pick us up at our resort (at least I know the Hideaway Resort offered this back in late 2005), we actually visited this waterfall on our own (see directions below). We figured that since we already had hired a car to have the freedom of roaming the entire island, we mind as well include a visit here on our own terms.

Once we reached the car park area and trailhead, we paid an admission fee (I don’t recall how much it was though), and then hiked for roughly 30 minutes each way (our GPS

records indicated that it was roughly 3.3km round trip).

The hike was a pleasant and mostly flat jungle walk involving numerous creek crossings (we counted 9 but there might be more since we lost count along the way). So like most tropical destinations, wearing water shoes or sandals

was a good idea. About the only annoyances about this excursion were mugginess (the air tended to be more stifling within a jungle) and the persistent presence of mosquitoes as they managed to draw blood from us whenever we stopped moving.

Although we were here in the beginning of the Wet Season in late December, the falls still had a nice and satisfactory flow. I’m not sure if this one flows year-round or not, but as far as we were concerned, it seemed to be one of the more reliable waterfalls in Viti Levu.

From the Pacific Hideaway Resort (roughly 85km or 90 minutes drive south of Nadi), we drove east about 10km on the Queen’s Road (which is the main developed part of the circle island road). Then, we found an access road inland (to our left), which I believed had a signpost to help us figure out when to turn left. This access road was unsealed and I think we were on it for about 5-10 minutes or so to a well-signed car park in front of a long pink house (our GPS

record shortchanged the actual distance). A lady walked out of the house to greet us and collect the fee to support maintenance of the trail as well as the village itself.

And as mentioned earlier, if self-driving is not an option, then it appeared that many resorts on the main island of Viti Levu offer organized tours to the Biausevu Waterfall. I’m sure if you ask your activity desk or receptionist, they’d have info regarding how to go about doing this. 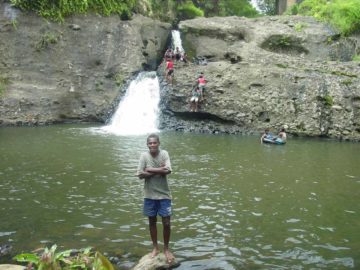