Browne Falls could very well be the tallest waterfall known in New Zealand so far as it was said to be 619m or 838m (depending on who you talk to and what the height criteria was based on).

However, this waterfall was only known to us because of this height discussion.

Truth be told, when we visited the Doubtful Sound in November 2004, this waterfall really blended in with the other waterfalls tumbling into the fiord.

We only knew which waterfall to single out based on anticipating where we’d find it after consulting a detailed map (Tumonz) prior to our trip.

Anyways, I highly doubt most visitors would have been able to spot Browne Falls as it was merely an ordinary thin mountain cascade that only gained notoriety in the internet literature as a result of internet debates over waterfall heights.

Its fortunate circumstantial geography happened to meet the criteria of waterfall enthusiasts trying to identify the highest waterfalls in the world.

Since it was being fed from Lake Browne at the top of one of the cliffs flanking the fiord, I’d imagine that its tendency to drain over the falls to provide longevity to its flow was what helped its stature as a waterfall noteworthy in academic and enthusiast circles worldwide.

That said, the real benefit of making Browne Falls our excuse to do a full day tour to Doubtful Sound was experiencing the “sound of silence” itself.

After all, Julie and I were treated to a variety of unexpected sights such as the playful Dusky Dolphins doing backflips or Fiordland Crested Penguins chilling out in one of the more hidden corners of the fiord.

We even spotted other waterfalls that we didn’t expect to see going into this visit like the Cleve Garth Falls, Stella Falls, Helena Falls, and Alice Falls among others (and those were just the named waterfalls).

Plus, we were treated to a mindblowing vista from Wilmot Pass looking down towards the secluded Doubtful Sound.

I look at this excursion as one of those compromises made between Nature enthusiasts and industrialists.

A highly controversial hydroelectric project that threatened to dramatically alter the greater ecosystem of Lake Manapouri as well as that of the Doubtful Sound area ultimately resulted in one of the most sophisticated schemes in the world.

What came about was that the hydro facility was developed deep underground beneath the West Arm of Lake Manapouri with very tight regulations on the lake’s level to ensure minimal disturbance of the ecosystem prior to the commencement of this project.

The silver lining to this project was that the Doubtful Sound used to be one of the most remote locations in New Zealand. Only the hardiest and well-prepared of trampers could witness the practically pristine fiord.

However, after the project, Lake Manapouri and Doubtful Sound were connected by the Wilmot Pass Road to enable day tours.

Thus, people like us who couldn’t devote nearly a week or more of hard tramping were now able to experience this otherwise inaccessible and pristine part of the wildnerness of Fiordland National Park.

Our full day tour began with a coach pick-up from our accommodation in Te Anau, which then whisked us away to Pearl Harbour at Lake Manapouri.

That was where we were grouped with the rest of the tour and went on a boat vessel that took us across Lake Manapouri.

There wasn’t much in the way of waterfalling along this 75-minute part of the tour, but it was relaxing and we could see the effects of a late season storm bringing a new dusting of snow on the lush rainforest surroundings.

When we reached the West Arm dock, we then boarded a coach that proceeded to drive us up the unsealed Wilmot Road.

We strategically sat on the left side of the bus so we could take fleeting photos of Cleve Garth Falls as the bus driver rushed his way towards a fern area and lookout, where he made a stop (by then the falls were well behind us).

Cleve Garth Falls might have been known mostly to workers of the West Arm Power Station because it sat in the backdrop dropping in multiple tiers.

It appeared thin in our photos because I reckon that the late season storm might have re-froze its creek thereby constricting its flow.

Beyond the stop, the Wilmot Pass Road peaked at Wilmot Pass itself where we got a gorgeous view down to the Deep Cove section of Doubtful Sound.

Off to one side of the cove, we saw a thick waterfall, which turned out to be Helena Falls.

Even the threatening clouds and short sprinkling of snow flurries that conspired to block our view didn’t do enough to deny us the majestic view of where we were about to go.

After Wilmot Pass (the drive took about an hour), we went down some switchbacks where the driver rushed his way past Stella Falls.

Fortunately, it didn’t matter which side of the bus we were sitting on this go because switchbacks were within view of it.

However, we had to be quick with our cameras (a quick DSLR would have been really handy here though we didn’t own one at the time).

Ultimately, the coach ended at the Deep Cove dock where we then boarded an awaiting vessel for the next three-hour part of the tour.

Even though we were able to get severely angled views of Helena Falls from the dock, we would punt that until later at the end of the cruise.

Instead, we headed deeper into the inlet where we passed before the thin Alice Falls (said to be 200m tall though I suspect it might be exaggerated) as we meandered about in the Doubtful Sound noticing mostly unnamed waterfalls along the way as well as a few side arms.

The highlights of this part of the cruise was seeing Dusky Dolphins doing backflips, which happened early on in our cruise.

Not long afterwards, we went deep enough in the Doubtful Sound to pass before Browne Falls. This waterfall was also joined by a companion which conspired to confuse most people about which waterfall was which.

Beyond Browne Falls, we saw a small penguin colony where some Fiordland Crested Penguins were chilling out before we encountered another waterfall protruding from the thick bush at Grono Bay.

Nearby this sight, we also saw what appeared to be a very remote shelter though I didn’t recall what was said about who lived here and why it was there.

Then, we went towards the choppy Tasman Sea as we were heading to the mouth of Doubtful Sound.

I’d imagine that this might have been what Captain Cook must have experienced when he doubted that he could sail his way in and out of this inlet (hence the name).

When we went back into the Doubtful Sound, we explored a few more side arms before the boat driver literally allowed us to enjoy the sound of silence as he shut off the engine and let Nature fill our ears.

After passing by Browne Falls and Alice Falls once more, we then returned to the dock where the coach driver took us towards the causeway and tailrace tunnel, which was where the outflow of the West Arm Power Station was.

That also gave us the opportunity to get a closer look at the impressive Helena Falls (also said to be 200m though I still wondered whether that was exaggerated, too).

Nevertheless, it was a rare thick and permanent named waterfall within the Doubtful Sound that I’d argue might be even more scenic than Browne Falls.

Next, we drove back towards the West Arm Power Station side where the driver gave us the option of checking out the power station or just heading back to the boat.

I think most of the tour didn’t care to see the power station so we just headed to the boat and motored back across the lake to Pearl Harbour.

Just at that time, the weather really started clearing up and we could finally start to see blue skies for the first time in what seemed like several days.

And thus ended our full day of touring the Doubtful Sound and its waterfalls.

Overall, this tour took us on the order of 8-9 hours in total away from our accommodation at Te Anau.

Browne Falls (and the Doubtful Sound) is administered under the jurisdiction of the Department of Conservation. For information or inquiries about the area as well as current conditions, visit their website.

Since we only did this excursion as part of an official escorted tour that included transport from our accommodation in Te Anau, I’ll have to punt you to Real Journeys (the tour operator) for the specifics about the logistics of partaking in this tour. Apparently, it was possible to extend this tour into two days with an overnight in one of the other remote fiords on the vessel, which I’d imagine would be an even more relaxed experience than our day tour. I also believe that this tour can also start and end at Queenstown (two hours drive further to the east of Te Anau, but that would require a very early start and late finish). 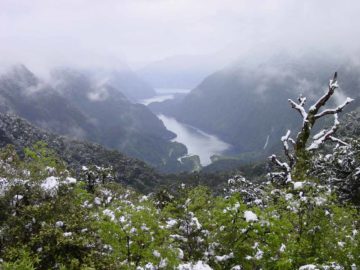 Stopping for Cleve Garth Falls January 8, 2011 8:33 pm by Chris O'Kane - I am a bus driver on the Wilmot Pass Road and I always stop to let people get a photo of this waterfall. ...Read More