Waipoo Falls (or Waipo’o Falls) is one of a handful of waterfalls within the Waimea Canyon, also known as the Grand Canyon of the Pacific.

This waterfall is said to drop over a height of 800ft in a pair of visible tiers fed by the Koke’e Stream, which probably dries up in the Summer (like most waterfalls in Kaua’i). Supporting this assertion, I recalled photos from a friend who went to Waimea Canyon in August and said this waterfall was dry. Then, when we showed up in December of 2006 on what was said to be an unusually dry Wet Season, this waterfall was still flowing pretty well. So that further supports the notion that this waterfall may only put on a show during the Wet Season.

We had no trouble seeing this waterfall during our visit as it was pretty much viewable from the road from a handful of overlooks. It was even visible from the busy Waimea Canyon Lookout (though it wasn’t the best viewing spot from here). Perhaps the best viewing spot for this waterfall was in the vicinity of the Pu’u Ka Pele Lookout, which was a little further north of the popular Waimea Canyon Lookout (see directions below).

As for the viewing experience, the photos you see on this page were taken with a regular zoom lens. However, since the roadside views were still a bit distant from the falls itself, I reckon a telephoto lens would really be helpful in bringing in the falls even closer in photographs.

There was a 5-mile return hike along the canyon rim towards the top of Waipoo Falls, but we didn’t do it. Although I can’t substantiate this claim, I was under the impression that the views of the falls wouldn’t improve with this hike anyways. Whether I was wrong in this assumption or not still remains to be seen.

Finally, we should mention that if you do shell out for a helicopter ride (which are very popular on the island of Kaua’i), there’s a pretty high chance you’ll get to see this waterfall from the air, especially if they fly over Waimea Canyon. Julie and I have been on multiple chopper rides in Kauai, and every time we have managed to spot Waipo’o Falls.

We first had to get to Waimea Canyon Road (Hwy 550), which branched off Hwy 50 in the town of Waimea about 24 miles west of Lihue. Once on Waimea Canyon Road, we got our first looks at the falls between mileposts 10 and 11 at the Waimea Canyon Lookout. However, there were closer views of Waipo’o Falls further up the road near mileposts 12 and 13.

Just south of the 13-mile post on Hwy 550 was the unsigned Pu’u Ka Pele Lookout (officially known as Waipo’o Falls Viewpoint), which yielded the best roadside views of Waipo’o Falls.

Another way to see this waterfall is through shelling out for a helicopter tour. On Kaua’i, there are heliports at both Hanapepe as well as Lihu’e. See Other Kaua’i Helicopter Waterfalls for more details. 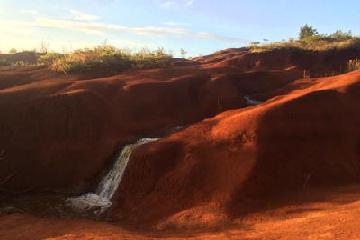 secret (unnamed) kauai waterfall (to the left off Waimea Canyon road, just a few miles south of the Waimea Canyon lookout itself) January 6, 2016 9:44 am by Lauren Cohn-Frankel - I saw this small but GORGEOUS waterfall from the highway on the way to Waimea Canyon and I just had to stop. It is so picture perfect I thought it must be man made at first, and was expecting to see a house or resort or something nearby but nope, nothing. There is a pull… ...Read More