And unlike the claims that we witnessed while on Front Street of Lahaina proclaiming Honokohau Falls was the Jurassic Falls, this one we could vouch for after seeing it on one of the movie adaptations on network TV.

The falls sits on private land owned by the Robinsons so the only way we were able to see it was by helicopter. However, I have seen in the literature that some hardy hikers have managed to hike to it (whether they were trespassing or not, I’m not sure), but I wouldn’t count on this option.

When we were there in December 2006, just about all of the chopper tour companies touted this waterfall as one of the features to be seen. That was one of the reasons why we did the tour (though we probably would’ve gone on one of the “Kaua’i mosquitoes” anyways), but we did get comped by Inter-Island Helicopters for a second helicopter tour after complaining that our pilot missed it on our initial two-hour waterfall tour.

It’s for these reasons that I’ve chosen to single out this waterfall on its own page instead of lumping it with the other waterfalls seen by helicopter since I’m sure it’d look real familiar to a lot of people, and it seemed to be a highlight for most helicopter tours on Kauai.

I know there were several helicopter companies in Lihu’e (near the airport) as well as Inter-Island in Hanapepe.

Since we did Inter-Island, we can say we went about 17.5 miles west on Hwy 50 from Lihu’e past the Hanapepe River Bridge then turned left onto Route 543 towards the Port Allen Airport.

If you’re going with any of the other tour companies, I think the they will also assist you with driving directions to their respective helipads. 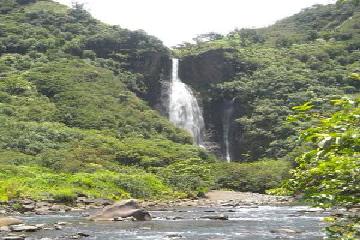 Wonderful! (Manawaiopuna Falls) September 23, 2013 2:31 am by Pakala - The only way in is by helicopter so this spot is very secluded. On private property, only one heli company is licensed to land there. It a gorgeous falls cascading at thend into a huge pool. Lots of watercrest growing wild in the surrounding rocks. A must see. ...Read More 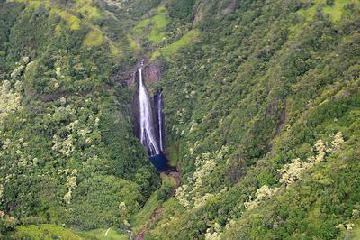 Helicopter ride to base of Manawaiopuna Falls (“The Jurassic Falls”) August 26, 2013 9:27 pm by Ron Andrews - We visited Kaua'i for the first time this month. As usual, we spent part of our time visiting waterfalls. We rode one of the helicopters that gave us a tour of the entire island. While flying over Manawaiopuna Falls we noticed a helicopter taking off from a helipad near the base of the falls. This… ...Read More