The Schiessentumpel Cascade (more formally spelled Schiessentümpel was the lone waterfall attraction that we visited in the landlocked country of Luxembourg. It was quite the obscure waterfall though it was our excuse to explore this tiny country at the far western end of the Moselle Valley.

This triple-segmented waterfall was more of an example of where its size mattered less and its lush surroundings made up for its diminutive stature. Indeed, this falls was only said to be a mere 3-5m tall, yet it exposed us to a more naturesque part of this region as it was on the way to the Vianden Castle in the northern part of Luxembourg from Saarburg (across the border in Germany).

Once we got to the official car park (see directions below), we then walked towards the visitor center before following a trail that skirted around a campsite then followed the Route 121 for roughly 500m towards the roadside attraction itself. While there were other ways to reach this waterfall through other more scenic trails, we were forced into this roadside route due to apparent flooding that had damaged all other inland trails along the Ernz Noire Stream.

While we were pretty much limited to the views from the road and from atop the stone bridge right above the waterfalls themselves, there were other possible vantage points for a closer look provided the trail would be restored to re-enable access. So we didn’t linger around for too long before we returned the way we came.

Overall, this excursion took us about an hour at a very leisurely pace.

The Schiessentumpel Cascade is located in the Mullerthal Region of Luxembourg. We’ll narrow down the driving routes to how we managed to do the drive both from Luxembourg City as well as coming in from Trier.

From Luxembourg City, we’d go northeast towards the E29 either via the E421 (N11) to the north of the city or via the N2 and A1 autoroute. Once onto the eastbound E29 (roughly 8km from the city center), we’d then follow the E29 for another 13km before turning left onto the Rue de Blumenthal (N14).

Then, we’d follow the N14 west for about 3km before keepring right at a fork to go onto the CR121. Once on the CR121, we then drove 4km towards another road junction. Keeping straight at the four-way intersection, we then went straight through a small gorge before the scenery opened up at the town of Mullerthal another 2km later.

Turning left at Rue des Rochers (CR 356), we then drove for a little under 200m before turning left onto Rue des Moulins, where we then picked a parking spot at the car park here. Overall, this 27km drive would take about a half-hour.

Coming from Trier, we’d find our way northwest onto the B51, which is right across the Kaiser-Wilhelm-Brücke (bridge), and follow it for almost 3km to the A64 autobahn heading west towards Luxembourg. Once on the A64, we’d then follow it for about 19km (it becomes the A1 after crossing the border) before taking exit 13 for the N1 (Potaschberg). 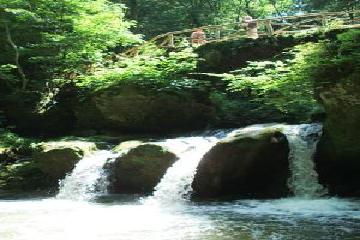 Schiessentumpel Luxembourg December 28, 2013 3:08 pm by Ruth Williams - Luxembourg is a very small but picturesque country much like its only waterfall the Schiessentumpel. Situated in the Mullerthal region close to the border with Germany the landscape comprises of wooded hills and valleys with strange sandstone rock formations. The Schiessentumpel is very easy to access and the whole area is popular with walkers and… ...Read More