Riesachfalle (or more accurately Riesachfälle; literally Riesach Falls) was a waterfall situated at the head of the Untertal Valley upslope from Schladming and Rohrmoos. It actually consisted of two waterfalls – a lower waterfall and a bigger upper waterfall. Supposedly, this combination made it one of the highest waterfalls in the province of Styria.

It turned out to be one of the easiest waterfalls to visit and at the same time one of the most frustrating. It was easy in that the lower waterfall was a straightforward uphill hike that only took about 10-15 minutes along the Riesachbach. There was a short spur leading up to a metal lookout that was blasted by the spray from the waterfall during my visit. I was able to get a slightly more photogenic view from the footbridge further downstream away from the mist.

The frustrating part was that I apparently missed the upper waterfall. Even as I write this, I’m still kicking myself for not thoroughly exploring the rest of the trails to ensure that I had completed this experience.

In my defense, the trail signage was not very obvious as the path I took to the lower waterfall (marked with a blue dot on the trail signage) was either a dead-end or a short loop leading back down to the Seeleitenparkplatz (see directions below).

While some of the trail signage at the trailhead seemed to suggest that there was Riesachfallsteig further up alongside the Riesachbach Creek taking about 30 minutes, I didn’t recall seeing the continuation of the path from the lower waterfall further upstream. That said, I did recall one trail fork along the way where in hindsight, I should have gone up the red dotted path for the Alpinsteig another hour upstream. During my visit, the signage didn’t suggest there was more of the Riesach Waterfalls further up this way, but that ended up being my critical mistake on this visit.

If I ever get a chance to return to Austria, I’m quite sure I’m going to go up that red-dotted path determined to at least get to the upper waterfalls and possibly extend the hike out to the Riesachsee Lake.

I did try to hike up the much longer Grosser Riesachfallrundweg (a longer 1.5-hour loop trail) up the west side of the creek, but it veered away from the creek in a long switchback before leading back towards the creek by the entrance of the Alpinsteig Höll. I wound up turning around before completing the switchback as this hot and sun-exposed uphill hike was better done on the return leg of the longer loop hike (assuming I would have found the steep uphill trail on the east side of the creek). Further up beyond the waterfall was the Riesachsee, which was the catchment and drainage feeding the waterfalls.

As a consolation prize, I did notice a tall waterfall across the Untertal Valley from the switchback on the longer trail as well as sweeping views of the valley itself. I believe that waterfall was on the Wildkarbach and could be called the Wildkarbachfall or Wildkarbach Wasserfall in German.

I wound up only spending about an hour away from the car trying to figure out what I had missed as I suspected something was missing from the experience. It wasn’t until I returned home did I realize what I had missed.

Speaking of the Alpinsteig Höll, one of the nice workers at the Schladming Visitor Center informed me that it was a trail involving suspension bridges, catwalks, and metal steps in a sort of a gorge hike. However, she said that the trail was only open on Fridays (it wasn’t a Friday on my visit).

Arriving at the trailhead for Riesachfälle was fairly straightforward once you know which side road to take to get into the Untertal Valley. I’ll describe how I did this drive from Salzburg since that was my base for doing this excursion, even though it wasn’t the closest starting point.

While there were car parks and cafes along the way, the closest car park was at the end of the road at the Seeleitenparkplatz.

Overall, this drive would take about 90 minutes.

It’s worth noting that I was told by the Schladming Visitor Center that the Untertalstraße collected a toll on Fridays (when the Alpinsteig Höll would be open). Since I didn’t do this excursion on a Friday, it was free. 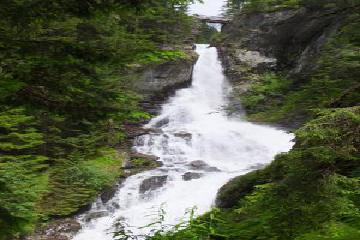 Riesachfall (Austria) July 22, 2014 9:16 pm by Ruth Williams - The 140m Riesachfall is located near the ski resort of Schladming and is on the Wild Waters hiking trail. The fall is in two sections the lower fall is only a ten minute walk from the car park which is located at the end of a toll road. You can then hike up a steep… ...Read More