The Malta Hochalmstrasse Waterfalls (or Malta Hochalmstraße Waterfalls) page is where I’m paying homage to some of the waterfalls that we encountered when we did this drive up to the head of the Maltatal Valley. While it was easy to get waterfall-fatigued on such waterfall-laced excursions like this, the drive featured some impressively tall named waterfalls like the Melnikfall and the Maralmbachfall.

At the top of it all at the Kölnbrein Dam and Reservoir (said to be the highest dam in the country at 200m tall), there was a butterflies-in-the-stomach-inducing Air Walk, where we could looking beneath the gratings all the way down to the ground! Looking away from the bottom, we witnessed stringy cascades spilling into the surrounding reservoirs while backed by mountains still clinging onto what’s left of their snow in the mid-Summer.

In any case, just about all of the waterfalls we’re highlighting here are roadside waterfalls so there was minimal exertion required. It was primarily a chance to autotour one of Austria’s most scenic roads, which by the way included a few long traffic lights as well as several tunnels and switchbacks.

Regarding the Melnikfall, a sign at the Fallbach Waterfall said that this was the highest waterfall in the Carinthia Province at 300m. It indeed did have multiple drops where the cumulative height seemed to suggest its towering stature, and this was best experienced from a signed car park about 900m from the toll booth, where we paid about 24 euros to get through.

While the view of the falls was impressive from the car park, there was a footpath that crossed the Malta Hochalmstrasse and onto a trail that led down to the Malta River where a bridge fronted the stream responsible for the Melnikfall. We didn’t go down there, but I’d imagine that would be about a 15-minute walk if we did.

Next, we stopped for the Strannerbachfall, which was another 2km further up the road. There was a roadside pullout just on the north side of the bridge, where we got out of the car, walked onto the bridge, and tried to glimpse as much of the twisting cascade as we could.

The Maralmbachfall, was another very notable waterfall that we noticed about 3.5km further north from the Strannerbach Bridge. In this instance, there were cars parked on the road waiting for a traffic light (ampel) to go green right at the trailhead for the short jaunt up to this waterfall. There was a timer also adjacent to the traffic light letting us know when the light would go green. Apparently, the ampel was necessary because there were tunnels that couldn’t support simultaneous bi-directional traffic. So the wait times could easily be around 20-30 minutes.

The nice thing about the position of the Maralmbachfall was that if we knew it would be a while before the light would go green, we could get out of the car and scamper up the short trail up to a lookout with a direct look right up at the jointed Maralmbachfall. Even a sign suggested that motorists make use of the waiting time by visiting this waterfall.

When I was here, I only had about a couple of minutes to get in my experience before the traffic light went green. This was one of those rare instances where I wished I had a little more red light time to enjoy this waterfall just a little bit more.

Beyond this traffic light, the flow of traffic was pretty much continuous as it passed through a combination of steep switchbacks and multiple tunnels. There was another traffic light in the middle of this stretch though it stayed green during our visit. Finally at about 7.5km beyond the Maralmbachfall, we arrived at the car park by the Kölnbrein Dam. Along the way, there was an attractive waterfall spilling right into the Galgenbichlspeicher, which was a reservoir a short distance downstream from the Kölnbrein Dam.

At this car park, we could get out of the car and walk onto the dam itself, where in the middle of it was the scary Air Walk. And throughout the walk on the dam, we could look upstream at more stringy cascades coming down the mountains flanking the larger Kölnbreinspeicher.

The Malta Hochalmstrasse was just 4km beyond the Fallbach Waterfall on the Maltatal Valley. I’ll repeat the directions here for convenience.

From Millstatt, we drove west on the B98 for about 8km to the A10 autobahn ramp heading north (right). Once on the autobahn, we continued for about 9km. Then, we took the exit 130 for Gmünd, which swung us around for about 1km to a roundabout. We then took the second exit to keep straight and did the same thing at the next roundabout. Afterwards, we were on the Maltatal Landesstraße and we continued on this road for about 15km to the toll booth for the Malta Hochalmstraße.

This drive costed us 24 euros to drive our vehicle through to the road. It was about 14km in distance from the toll station to the car park at the reservoir. Overall, it took us over 30 minutes to drive to the toll booth, but we had to allow a minimum of 2 hours or more to really enjoy the Malta Hochalmstraße.

Sweep examining the Melnikfall from the designated car park for it 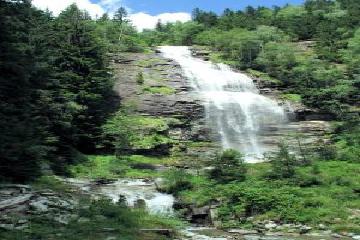 Falls viewed from the Malta Hochalmstrasse (Austria) November 29, 2011 7:26 pm by Ruth Williams - The Malta High Mountain Road (Malta Hochalmstrasse) is a toll road that winds its way up the valley to a height of almost 2000m until it reaches Austria's tallest dam the Kolnbrein. I am including details of three of the falls we viewed from the road. The Malteiner Wasserspiele (water fountains) is a series of… ...Read More