Gooseberry Falls was really a series of three wide and impressive waterfalls on the Gooseberry River. It was one of several waterfalls that we encountered while touring the North Shore of Lake Superior between Duluth and Thunder Bay. And perhaps this series of waterfalls was the most popular amongst all the waterfalls that we had encountered in this very scenic stretch of the Lake Superior shoreline. While each of the three waterfalls (Upper, Middle, and Lower) comprising the Gooseberry Falls were modestly sized on their own, Julie and I agree that it was really the overall experience and ease of accessibiilty that made this waterfall stand out (hence resulting in its high rating). Indeed, the photos really didn’t do this waterfall justice as they can’t possibly convey all the various ways we were able to experience each of these waterfalls. Nevertheless, we’re making the attempt to convey our enthusiasm for the falls in this write up!

All of the Gooseberry Falls were right beneath the Minnesota Highway 61 (see directions below). The 30ft Upper Falls was slightly to the north of the bridge, while the Middle and Lower Falls (60ft combined) were further to the south of the bridge as the Gooseberry River would ultimately continue its southward advance before draining into the vast Lake Superior. While there were many hiking options to experience these waterfalls, we opted to combine a short out-and-back hike to take in the Upper Falls before doing a loop hike that allowed us to experience the Middle and Lower Falls in many different ways.

From the huge car park, we followed some very well-developed paths towards an extensive visitor center before continuing northwards as we were following some castle-like walls flanking the Hwy 61. Once we got near the underside of the Hwy 61 bridge, we briefly checked out the brink of the Middle Falls before going back beneath the road bridge to get frontal views of the Upper Falls. Nearby the lookout of the frontal view of Upper Falls was a small cave or cove as well as the continuation of the trail as it followed the river around to the brink of the Upper Falls. Along the way, there were other trails leading away from the river to the former Civilian Conservation Corps. site, which was once a bustling area between 1934-1941 during the Great Depression, where workers spent their nights resting, socializing, and learning new skills after a hard day’s work building trails, viewing structures, and buildings that are still in use today (with some modest maintenance and improvements, of course)!

After having our fill of the Upper Falls, we then ascended some stairs leading to a footbridge above the Gooseberry River, but beneath the noisy Hwy 61 road bridge. From this vantage point, we were able to get a top down view of the Upper Falls while also looking further downstream over the brinks of the Middle and Lower Falls towards the valley further downstream as well as the vast Lake Superior further beyond. The trail then continued to follow the far side of the Gooseberry River, where we’d eventually get a very nice frontal (albeit partial) view of the Middle and Lower Falls seen in a slight opening in the foliage preventing us from getting a more expansive view. Nevertheless, Julie and I believe this to be the most photogenic viewpoint, which you can see in the photograph at the top of this page.

Beyond the lookout, we continued the hike downhill as it would eventually lead us down to the banks of the Gooseberry River. Once we were down there, we were able to get a few more angled and partial views of the Lower Falls and maybe part of the Middle Falls before crossing over a couple of bridges to get back on the west side of the Gooseberry River. From there, we followed the trail back upstream towards the brink of the Lower Falls, and then ultimately to the brink of the Middle Falls again, which completed the loop hike taking in the Middle and Lower Falls.

Overall, the entire excursion taking in the three main components of the Gooseberry Falls took us about 1 hour and 15 minutes at a very leisurely pace. We could’ve made this visit as short as we wanted it to be or as long as we wanted it to be (especially since there were many more trails branching off the loop trail that we took), but we believe the way we did it was the most comprehensive way you could do it if the waterfalls was the main thing you were after. And judging from how many other people were on the same trails we were on, it seemed like they, too, were motivated by the waterfalls in much the same manner as we were. Indeed, this was certainly NOT one of those places where you could expect solitude given its immense popularity.

Finally, we have to note that we happened to see this waterfall in much higher flow than what we were anticipating based on our pre-trip research. We suspect that we might have benefitted from the passing of some very heavy (flooding) rains in the weeks leading up to our trip. We happened to show up when the weather cleared up while benefitting from the after effects of the storm in terms of high flow on the Gooseberry River. That said, we also had to be careful about getting too close to the river given the high flow and turbulent undertows conspiring to drown unsuspecting victims.

Another interesting thing to note was that the name of the falls and the river were said to have come from explorer maps as early as 1670. In those early documented surveys of the area, the river was referred to as Sieur des Groseilliers in French or “Shab-on-im-i-kan-i-sibi” in the Native American Anishinabe tongue. Apparently, the meanings of these names both refer to gooseberries, and so the name stuck. We’re not sure if there was a history of these berries prior to that to motivate them to come up with the name in the first place.

Gooseberry Falls was the last of the major waterfalls that we visited during our long drive back from Thunder Bay, Ontario to Duluth, Minnesota along the North Shore of Lake Superior. The falls was within Gooseberry State Park, which was right off the Minnesota Highway 61 on its east (lakeshore) side about 40 miles (about an hour) north of Duluth and 241km (3 hours) south of Thunder Bay. The nearest town of significant size would probably be Two Harbors some 13 miles to the south.

Once we took the turnoff into Gooseberry State Park, we then followed the park road to its end, where there were a pair of very large yet very busy car parks. In fact, we noticed quite a few people were parked along the shoulders of the road closer to the highway as I’m sure there was a lack of parking spaces to accommodate everyone. 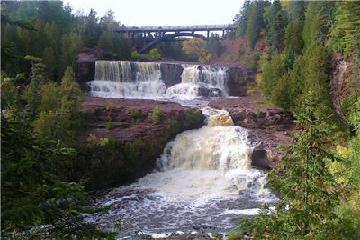 Gooseberry Falls, Minnesota April 15, 2015 12:51 am by Daniel - Gooseberry Falls, Two Harbors, MN. The crown jewel of the North Shore, Gooseberry Falls is one of the most recognizable sites in the state. Featuring 5 sets of falls through a dramatic river gorge, the Gooseberry River flows out to an agate beach into the largest lake in the world. Hiking trails wind around the… ...Read More