Sturtevant Falls was one of the more attractive waterfalls in the Southern California area.

The moss and algae growing on the cliff where its waters ran added lovely colors to this pleasant 50ft waterfall.

We also liked this waterfall enough to give it a spot on our Top 10 List of Southern California Waterfalls.

We noticed that this waterfall was an extremely popular attraction.

That probably had a lot to do with its location in Big Santa Anita Canyon in the foothills of the Angeles National Forest.

That was where the urban sprawl sat right up against these foothills at Sierra Madre (just north of the suburb of Arcadia).

On our most recent visits here, we ended up having a difficult time finding parking that was reasonably close to the trailhead at Chantry Flat (see directions below).

Typically under these circumstances, we would eventually find parking at a suitable pullout further down the winding mountain.

Of course, we’d do this after securing a day pass beforehand or at the pack station at Chantry Flat.

Thus, we could wind up walking an additional 1/4- or even more than a mile in each direction just to get started!

Therefore, what was supposed to be a roughly 3.2-mile round trip hike could turn out to be closer to 4 or even 5 miles round trip!

Indeed, it seemed that the parking situation continued to get worse over the years.

That said, the authorities here seemed to be very keen on writing tickets for not parking behind the white lines or not having permits displayed.

Once we made it to the trailhead at the the Chantry Flat Fire Road gate, we walked downhill along the hot, exposed-to-the-sun, paved road.

It led right down to creek level in the depths of Big Santa Anita Canyon.

Notice I said downhill, which meant this trail was kind of an upside-down hike.

Thus, we knew that we were going to have to climb back up this paved stretch at the end of our hike.

Along this descent, right at the second significant bend, there was a trail junction leading away from the pavement on a narrower trail towards Hermit Falls.

We have a separate write-up for that waterfall, and we’ll not get into that on this page.

Once at the base of the descent, the pavement gave way to a well-established, forest-shaded dirt trail.

Many of these cabins looked like they were still in use (even actively inhabited).

In fact, many of the cabins appeared to have been renovated or well kept.

I even remembered smelling burning wood as apparently one of those cabins was cooking up something over a wood fire.

Along the creek, we found several man-made dams, which I suspected were either for small scale hydroelectricity for the cabins, flood control, or some kind of water diversion.

After we reached a series of conspicuous cabins next to the trail (one of which was called Bombadil’s Castle, whose name I’d imagine came from the Lord of the Rings

books), we then crossed what was known as Fiddler’s Crossing.

That was the first of three fairly straight-forward stream crossings.

In high flow, it might require some nifty boulder hopping (hiking sticks would be good for balance) to keep the shoes from getting soaked.

After traversing the last crossing, we made it to the base of the attractive (especially by Southern California standards) Sturtevant Falls.

To get right in front of the waterfall for a direct look at it, we crossed the creek one more time.

And like most waterfalls in the Southern California area, the popularity of the falls made us share it with at least 20 to 30 people at a time.

I suppose since we came on weekends (once on a Memorial Day Monday), this shouldn’t have been surprising.

Therefore, I’d imagine it would be much quieter on weekdays.

Nonetheless, we still found it somewhat hard to believe that such a getaway could be so close to the city.

Indeed, we found it to be a great way to get good exercise, scenery, and a revitalization of mind and body.

Sturtevant Falls resides in the Angeles National Forest. For information or inquiries about the area as well as current conditions, visit their website or Facebook page.

To arrive at the Chantry Flat Fire Road trailhead from say downtown Los Angeles, drive north to the 210 Freeway, then take the 210 Freeway east and exit Santa Anita Ave. (in Arcadia) heading north.

Take this road all the way into the foothills to the end of the road where there’s a car park, pack station, and the start of the trail itself. You must have a Forest Adventure Pass displayed on your parked vehicle since it’s on National Forest land. And given the popularity of this place, we actually witnessed a ranger actively patrolling and writing up tickets for violators who failed to display a pass (something we had rarely seen until we did this trail).

If you fail to buy one in advance at stores like REI, Sports Chalet, etc., you can purchase one at the pack station by the car park. Finally, we must say that early birds tend to get better parking spots. After say 9:30am or so on weekends, finding parking can be a bit difficult and even frustrating (trust us, we know this firsthand). In fact, we noticed some cars parked illegally (i.e. blocking lanes on the Forest Service Road to Chantry Flat). I wasn’t sure if those guys got tickets from the patrolling ranger or not.

Now after having gone through this hiking excursion a few times, we’ve learned that the order of operations for avoiding a ticket while minimizing the time wasted during the effort to try to stay out of trouble was the following (assuming we hadn’t bought one of the forest service passes yet)…

First and foremost is to drive all the way up to the Chantry Flat pack station at the end of the road. Even if there’s no parking available (it’s very rare to actually be lucky enough to find a spot up here), we’ve always managed to find temporary stopping spots in the lot without blocking traffic so I could pull over and let Julie walk in and get the day pass or annual pass before returning to the car so I could display it.

Then, we’d offload the gear and other passengers (if it was more than just Julie and I), and they’d wait patiently for me up here at the trailhead while I’d go in search of finding parking. Typically, it would probably be at least 0.5 miles from Chantry Flat before I’d finally find a spot to park. From there, I’d walk back up to the trailhead to rejoin Julie (and the rest of the group if we had more hikers), and then we’d be on our way.

Doing it this way would certainly minimize the amount of back-and-forth walking between the station and the parking spot just to get and display a pass even before getting started with the hike. And only one person has to go through the extra walking (i.e. the driver). Depending on how far you’ve parked, that could easily be over a mile of walking by itself!


Sweep from bottom to top of the falls 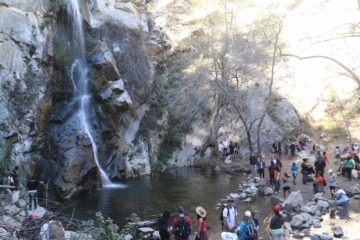 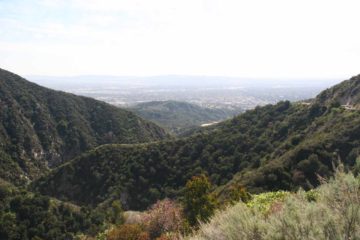 Chantry Flats to Stuartevant Falls – Lots of stories and photo ops January 30, 2015 4:47 am by P.L. Wick - Chantry Flats to Stuartevant Falls for years (try, over a fifty year time frame) was a favorite hike of ours. Often two or three times per week by either of the two low-end approaches; occasionally from Wilson parking lot or even Red Box. Weekdays have always been the best. Up past the falls into Winter… ...Read More

Long time visitor (Sturtevant Falls) January 23, 2015 4:20 pm by _Anonymous205 - I grew up in El Monte Ca during a time when the city was spending a goodly amount of money on the parks service basically having all the parks staffed daily during the summer by college student whose main job was to organize activities for us kids. I lived by Fletcher park....we called ourselves the… ...Read More

Such fun was had by all (Sturtevant Falls) December 30, 2012 4:46 am by Aubrie - Just went today with my husband and friend. It had been raining off and on all day but we went anyway. The walk was long but worth it. I'm not in the best shape but I made it and I would say it wasn't bad. Once we got to the falls it was amazing we… ...Read More

This Year Bummed Me Out (Sturtevant Falls) July 24, 2012 9:45 pm by M. Perez - Last year during this time there was so much water and the streams were rushing water... This past Sunday, 7 of us went on the hike hoping to have a great time, but there was no water... Water was still and dirty for not moving much. Not only that someone decided not to be so… ...Read More

Sturtevant Falls October 8, 2008 4:47 am by Noah - This was a pretty cool waterfall. We went in early March and there was plenty of water. It's a somewhat steep hike down a paved path and then a pretty hike along a nice stream. A great half day adventure from LA. ...Read More