San Antonio Falls was a waterfall where it pays to time a visit for the peak snowmelt when Mt Baldy (formally known as Mt San Antonio) has accumulated snow during the Winter.

As you can see the adjacent photo, when this waterfall on the slopes of Mt Baldy puts on a show, you can easily see why we included it on our Top 10 So Cal Waterfalls List.

Luckily, Mt Baldy is quite visible from the Los Angeles basin (it’s the very prominent south-facing mountain when looking towards Pomona) so Mother Nature already provides clues as to when to time a visit.

So what is this timing, you may ask?

Our general rule of thumb is to observe whether Mt Baldy has had snow or not. Usually in the Winters, the storms we get would produce snow in the mountains.

And if there has been an accumulation, it’s quite visible on the peak of Mt Baldy.

Of course with Climate Change, we now have to evaluate our Winters in terms of drought years versus wet years.

Therefore, it may be only certain years where it’s worth the effort to make it up to the slopes of Mt Baldy to see this waterfall despite the season.

In any case, when the seasons change and the weather warms up (typically in the Spring), that would be when the creek responsible for feeding the waterfall would contain the volume it would need to put on a show.

Just to give you an idea of how the timing can affect the experience, here’s a quick summary of how we experienced the falls over the years.

We’ve been to San Antonio Falls twice on heavy precipitation years (once in 2005 and once in 2010).

We’ve also been here once in a Dry Winter of a “headfake” year in February 2015, where a dry January followed a lot of precipitation in December.

We also did a more recent visit after a little over a week of no rain following nearly a week of saturation rains in early January 2016.

In those heavy precipitation years, Spring was definitely the time to see the waterfall put on a show as there was even enough volume to have a waterwheel (where the water can get thrown up before resuming its descent) on its lower tiers.

However, on one of those visits, there was enough snow clinging to its neighboring slopes that it caused the waterfall to kind of blended in with the snow.

In our visit during a drought year, we showed up when most of the snow had left (a little over a month after the last significant precipitation). On that visit, it was clear that the waterfall didn’t have that many more weeks left before trickling or going dry.

Then again, on another recent visit, we were there when most of Mt Baldy was covered in snow. While the waterfall did have appreciable volume, both the trail and the neighboring slopes to the falls had a combination of ice and snow.

That made the hike a little more difficult than an easy stroll, but then the trailhead area became more of a snow play area, which also made this waterfalling excursion much more popular than we had seen over the years.

As for the hike itself, it was really more of a short walk on a paved road (though when Julie and I were first here back in 2005, Falls Road was not paved).

The entire course was along Falls Road, which deviated from Baldy Road at Manker Flats (see directions below).

The slightly uphill hike was very easy for the family and it even provided a nice glimpse of the LA Basin looking downslope near where the road made a sharp turn.

After about 3/4-mile (passing by what looked like someone’s driveway and possibly the very reason why Falls Rd became paved), we arrived at the lookout for San Antonio Falls.

We had also noticed there were a few more tiers above and below this main section so it’s conceivable that we could’ve easily underestimated the overall height of the waterfall.

That said, the taller slopes made the falls appear smaller or even more invisible by comparison, especially when there’s snow.

Scrambling to the base of San Antonio Falls

Beyond the overlook (right at the end of the hairpin turn), there was a narrow path that led right to the base of San Antonio Falls.

A short distance from the overlook at the Falls Road hairpin, there was a pretty well-worn section of the track that definitely required us to wear shoes with decent grip.

A slip and fall into that ravine that the slope faced would certainly be cause for injury. And even if you slid down there uninjured, it looked like it would be a difficult scramble back up.

So I can see why more than a few people don’t continue from the overlook to the base of the falls.

If there happened to be snow or ice here or the erosion eventually gets to the point that this might not be passable, then I’d be very uncomfortable proceeding past this point.

Anyways, Falls Road continued going up the slope apparently towards the lifts at the Baldy Summit, but we’ve never hiked past the waterfall so we can’t comment more on it.

Thus, the round trip distance of this hike was on the order of 1.5 miles and generally 90 minutes to 2 hours was more than enough time for us to enjoy both the hike and the falls.

San Antonio Falls resides in the San Bernardino National Forest. For information or inquiries about the area as well as current conditions, visit their website or Facebook page.

To get to the falls, you’ll want to take the I-210 East towards the Claremont area (34 miles east of downtown Los Angeles). Exit at Base Line Road, turn left at the light, then immediately turn right onto Padua Road. Follow Padua Road through what looks like a pretty new suburban neighborhood until Mt Baldy Road. Turn right onto Mt Baldy Road and take it roughly 9 miles or so climbing along the winding mountainous roads through Baldy Village, and eventually to the Falls Road entrance just beyond the Manker Flat Campground (note there is one hairpin turn beyond Baldy Village towards Icebox Canyon where it’s easy to mistakenly go straight and leave Mt Baldy Road). There’s usually lots of vehicles parked along divided Mt Baldy Road on the downslope side around the Falls Road so you shouldn’t miss it.

But before getting to the trailhead, we recommend that when you reach Baldy Village, you pick up an Adventure Pass or Recreation Pass in one of the handful of outfitters and shops there. That’s because the falls is on Angeles National Forest land and parked vehicles are supposed to display these passes.

On one of our recent visits in 2015, we followed Ann Marie Brown

‘s directions, where she had us getting off Mountain Ave from the I-210 and taking it north for 4.3 miles. Shortly after a hairpin turn by Lower San Antonio station, we then had to turn sharply right at a blind turn onto Mt Baldy Road, then we continued climbing up the mountain for the next 9 miles to Manker Flat Campground and ultimately the trailhead for San Antonio Falls shortly thereafter.

Speaking of climbing, I want to mention that for steep mountain roads like this (especially on the hairpins and grades beyond Baldy Village), you’ll probably want to be honest with yourself about whether your car has enough power and endurance (and maintenance) to handle these types of roads. In the case of our Corolla with 230k miles on it, we managed to make it, but we did have a bit of a scare when we parked the car at the trailhead and noticed some steam or smoke protruding from the hood (despite the fact that the car made no indication of overheating or abnormally high engine temperatures). On our very recent 2016 visit, the automatic transmission fluid on my parents’ SUV overheated due to negligence of not having that fluid flushed prior to making our visit (luckily, the issue solved itself when we parked the car and returned to it some 90 minutes later). So just keep this in mind if you have an old car, because it’s not exactly a nice place to have a break down.

Top down sweep of the falls in somewhat low flow in February 2015 (but still pretty). Then, the sweep continues downstream before ending at the scrambling trail leading to the base of the falls


360 degree sweep from right in front of the base of San Antonio Falls; even showing some remnant snow just a short bit further downstream 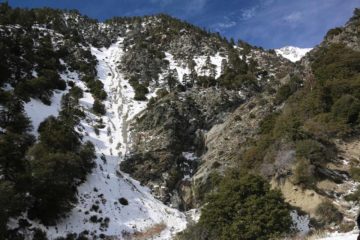 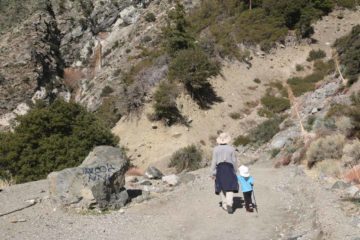 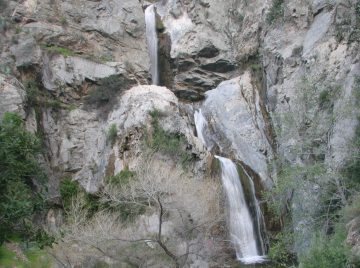 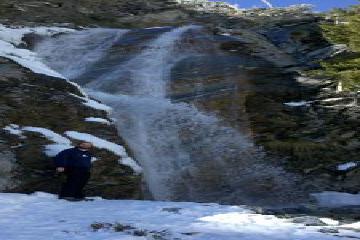 San Antonio Falls With Snow March 14, 2011 7:02 am by Jonathan - My wife and I are fairly new to visiting waterfalls, as we just started at the beginning of the year. We've been to several so far, and we love it! A few weeks ago we decided to check out San Antonio Falls. It had just snowed over the weekend, and for some reason I wasn't… ...Read More 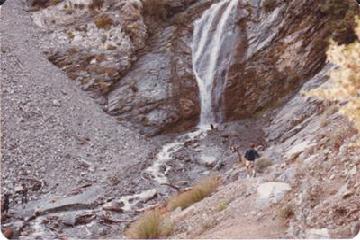