Peppermint Creek Falls is a very pretty 150ft waterfall tumbling over a rounded granite surface with views towards the Dome Land Wilderness.

Since getting to the falls involves driving the Lloyds Meadow Road (see directions below), you’ll get to glimpse the Needles.

The Needles was an unusual giant rock formation that is also known as a difficult rock climbing route.

Getting a good view of the falls required a rather steep scramble towards the base of the falls.

Even though the scramble was only 1/4-mile (each way), we definitely had to take our time.

That was because the terrain was both slick (from the loose pebbles) and the incline was severe enough that going down was a little scary.

In fact, going up back up required the use of our hands in some spots, which gives you an idea of the steepness of this scramble.

While we were busy concentrating on not taking a nasty fall during the descent, we did manage to notice some satisfying profile views of the rounded granite surface and the waterfall that tumbled over it.

Then, once we made it to the bottom, we got nice direct views as Peppermint Creek tumbled in multiple tiers while twisting towards the left.

The first time Julie and I were here (back in 2002), there weren’t a whole lot of people.

We only saw a handful of people above the falls at the Lower Peppermint Campground and even fewer people who managed to do the scramble to get to the base.

The last time we were here with the parents in 2005, there were lots more people crowding the Lower Peppermint Campground (maybe because it was Memorial Day weekend) as well as chilling out at the very top of the falls.

Nevertheless, we were still one of the few who made it down to the bottom of the falls on that day. So we still found it nice and peaceful down there!

Peppermint Creek Falls was near the Lower Peppermint Campground deep in the Tule River District of the Sequoia National Forest. We managed to get here from Los Angeles via Porterville, Ponderosa, and Johnsondale (via I-5, Hwy 99, Hwy 190 becoming Western Divide Hwy M-90, then M-50). We turned left onto Lloyds Meadow Road from Johnsondale.

We made our return drive through Kernville to Lake Isabella, and eventually back to Bakersfield (via Mountain Hwy 99, Hwy 155, then Hwy 178) and then back to Los Angeles (via Hwy 99 and I-5). Regardless of which way we took, the drive would take at least 4-5 hours in each direction.

Look for parking somewhere along the Lower Peppermint Campground road if you have a 2wd vehicle. Technically, there’s an official car park a little further on the unpaved road, but you have to get over a real steep sandy hill with deep ruts that I figure only a 4wd can make. So without a gas guzzler, you mind as well walk that part (like we did).

The scramble begins just beyond the “formal” car park that only the gas guzzlers can make.

Sweep from near the base of the falls. Please excuse the poor quality as this video is ancient. 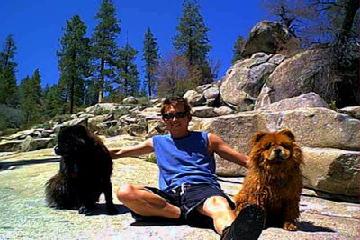 This Place is HEAVEN!! (Peppermint Creek Falls) November 28, 2012 1:09 pm by Don Laviolette - Back in 1989 my best friend Glenn Premore who God rest his soul passed away in 1994 showed me and our friends of this wonderful place. Since then I have been coming up every year since then and brought new friends and my two dogs Rebel and Boomer for many years until this past year… ...Read More