Grizzly Falls is probably the most attractive waterfall on a typical self-tour into the Cedar Grove section of Kings Canyon National Park.

Even though this waterfall is technically not in Kings Canyon (it belongs to Sequoia National Forest), it’s close enough to make us associate it with the national park.

In any case, it drops rather dramatically some 75ft in close proximity to the Cedar Grove road. We’ve seen this waterfall in differing states over the multiple times we’ve visited this waterfall so we can appreciate how much timing can affect the experience.

For example, when we showed up during the Spring of 2005 (a heavy snowpack year), the falls was blasting spray so hard that it was very difficult to even stand in front of the falls for a clean look at it without trees blocking the way. Thus, photography under such conditions was quite a challenge.

During the late Summer of 2004, the falls narrowed into a thin, singular drop exposing much of the bare rock wall that would normally support Grizzly Creek. It was under this condition that we saw numerous people enjoying themselves in the plunge pool at the waterfall’s base.

Then, we also saw the waterfall in April 2002 when the weather was cold enough from a late Winter storm to constrict Grizzly Creek in such a way that the falls had moderate flow. This was the ideal condition to stand before Grizzly Falls and take a full photo of it.

Finally, we have to say that since this was such an easy waterfall to visit, that also made it very popular. Thus, we realized that we couldn’t have the waterfall to ourselves for any appreciable length of time.

And since I’d imagine this would be a very short stop, you might also want to consider a visit to the nearby Boyden Cavern.

As mentioned above, the falls is on the Sequoia National Forest stretch of the Kings Canyon Highway (Hwy 180) between the Grant Grove and Cedar Grove sections of Kings Canyon National Park (Hwy 180). The car park is barely 6 miles before the Cedar Grove entrance. The car park seemed to accommodate quite a few cars with a few picnic tables to make it a decent picnic spot.

To provide a little context, the Grant Grove part of Sequoia National Park was under 90 minutes drive east of Fresno along the Hwy 180. It was about 2 hours drive from Three Rivers along the twisty Generals Highway (Hwy 198). Fresno is about 3.5 hours drive north of Los Angeles along a combination of the I-5 and Hwy 99. 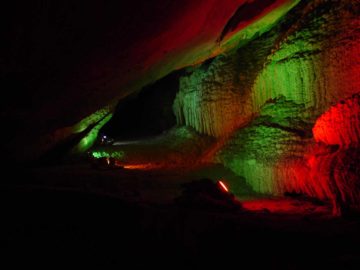 Is he naked? (Grizzly Falls) May 16, 2015 6:27 pm by Katherine Strassburg - More than thirty years ago my in-laws from Michigan visited us when we lived in Dinuba. We spent one day touring Kings Canyon and stopped for a picnic at Grizzly Falls...one of our favorite places. We noticed three or four young men at the top of the falls waving to passers-by, so we waved back.… ...Read More

S.B. September 25, 2010 1:26 am by Scott Balko - I slipped and fell from Grizzly Falls 34 years ago. I have been a quadriplegic since. Please, use caution when visiting. Don't do something stupid. ...Read More