Wallaman Falls was certainly the one waterfall that Julie and I were determined to see during our visit to Queensland in May 2008. Our anticipation was largely based on the literature proclaiming this waterfall to be the largest single-drop waterfall in the country as Stony Creek had a sheer drop of 268m. But after having seen the falls for ourselves, we could definitely say that it certainly met our lofty expectations as you can see from the photos on this page. Moreover, we were able to admire this Australian natural wonder from across the gorge (as you see pictured above) as well as from its base, where we found ourselves amidst some of the most ancient rainforests left in the world (and why Girringun National Park [also known as Lumholtz National Park] was created).

Our visit began with the overlooks directly across the gorge from the falls. These were merely a few paces from the car park (see directions below). From this overlook, we were able to appreciate the full extent and context of the falls, and it also gave us an appreciation of how far we would need to walk in order to get closer to it. In any case, we were able to view the falls from this vantage point at around 9:15am as well as just after 12pm. During our return to the overlook at midday, that was when we were able to appreciate rainbows arcing across the base of the falls.

As for the misty base, we had to take a 4km return walk descending somewhat moderately into the gorge. The way down wasn’t an issue, but the hike back up was long, hot (it did get a little humid down there), and tiring. During the descent, we noticed signs indicating the presence of poisonous plants so we made sure to stay on the track without touching any vegetation as much as possible (for we weren’t quite sure exactly which ones were neurotoxic and which ones weren’t). Fortunately, it was fairly easy to do that because the track was wide enough and not so overgrown that rubbing elbows with the poisonous plants would be an issue.

Speaking of the vegetation, I learned that Girringun (Lumholtz) National Park contained some of the oldest rainforests on earth, because it was part of the original rainforest when Australia was part of the supercontinent known as Gondwanaland (where Australia, South America, Asia, and Africa among others were all part of the same landmass). It was pretty cool to be hiking amongst such heritage as the track descended from the drier subtropical tablelands at the top into the muggier and more lush rainforest below. We could see this difference in the vegetation as the trees had more moss surrounding them and the vegetation just seemed more green than the more shrubbier varieties we saw earlier on in the walk.

Once we were at the end of the walk, the viewing decks were located where vegetation was open enough to allow for unobstructed views (though we were also getting blasted by the mist of the falls). The falls didn’t look quite as tall from down here, but I reckon that had more to do with forced perspective than anything else. Even as Julie and I arrived to the base of the falls at around 10am on a sunny morning, we were blessed to have timed our visit to see impressive double rainbows in the swirling mist. Overall, Julie and I spent about 3 hours away from the car, but we really took our time on the hike while also lingering for a long time at every vantage point that we were able to get of the falls.

Wallaman Falls would flow its strongest in the Wet Season (the Australian Summer) and would gradually diminish its flow as the Dry Season wore on. Nonetheless, it was said that Stony Creek (a tributary of the Herbert River as well as the watercourse of Wallaman Falls) flowed year-round thereby making the falls permanent. I believe that we happened to see the falls in high flow considering we were there shortly after what appeared to be some remnant thunderstorms had passed. Our visit in mid-May occurred just as the Wet Season was about over and the Dry Season began.

Indeed, Julie and I considered Wallaman Falls to be one of our favorite waterfalls in Australia (let alone Queensland), and this was certainly reflected in our Top 10 Australian Waterfalls page. Certainly, we weren’t the only ones who enjoyed this waterfall as this place was quite popular as well thanks to the relative ease-of-access from its roads and its well-developed walking tracks.

From Ingham, we left the Bruce Hwy (A1) heading west at McIlwraith St then turning right onto Tully St before turning left onto Lannercost St, which became the Ingam-Abergowrie Rd. Going this route bypassed the town centre of Ingham, which had some road construction and traffic during our visit.

We followed Wallaman Falls Rd for about 32km, which involved driving on a narrow and well-graded gravel road. There were plenty of blind turns as the road entered forest, and there were also plenty of signs warning of potential crossings of endangered cassowaries (a type of aggressive giant flightless bird with a bracchiosaurus-type head). We then followed the signpost to take the turnoff on our right (Lookout Rd), which ultimately led to the car park for the overlooks and walking tracks.

Fixated on the falls from the upper overlook 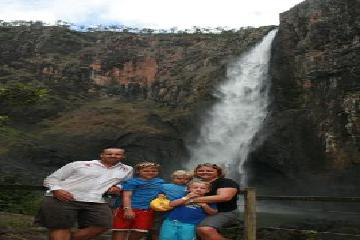 Wallaman Falls, August 2010 July 4, 2011 4:05 am by Jeff Scott - We visited Wallaman Falls as part of our around-Australia trip in 2010. Definitely worth the visit, and it was also a nice place for an overnight camp. My video shows the road in as well as giving you a good idea of what the walk down to the bottom is like. We didn't have any… ...Read More