Victoria Valley Falls (or just Victoria Falls) was kind of an unfortunate follow up act to Nelson Falls as Julie and I were driving from Queenstown in the west towards Hobart out east. As you can see from the photo at the top of this page, there really wasn’t much to the waterfall as Kenmere Creek had very low flow. We couldn’t tell if this was because we didn’t come early enough in the season (i.e. dead smack during Winter or early Spring) or if we didn’t come soon enough after a heavy rain or if it was yet another victim of the drought that plagued our November 2006 visit to the southeast of Australia.

Even though the track had signs, as we followed them, we realized that along the way the track seemed to have disappeared and started to meander away from the waterfall. The overgrowth got denser and at some point we decided not to proceed any further and just turn back given the state of the falls. The signage was deceptive in that it got us thinking this was a developed and easier-to-follow track than it really was.

We drove 140km east of Nelson Falls along the Lyell Hwy (A10) to the town of Ouse (174km or 2.5 hours drive east of Queenstown). We then turned left onto Victoria Valley Rd and followed it for about 24km eventually past the township of Osterley (really just a collection of a few homes) to the little parking bay for the falls just before the township of Victoria Valley.

Coming in the other direction from the east, Ouse was 89km northwest of Hobart. 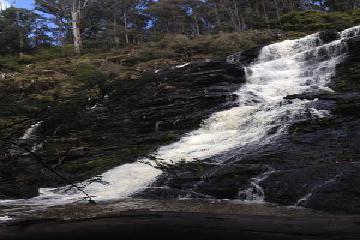 Victoria Valley Falls after rain May 30, 2015 12:17 am by Caedence Kuepper - Last year we went away on a road-trip up the west coast of Tassie, seeing plenty of great waterfalls along the way, including Montezuma, Nelson, Waratah, Philsophers, Champagne and Bridalveil, Liffey, as well as Victoria Valley Falls. There was plenty of rain leading up to our trip, as well as on the first couple of… ...Read More