Montezuma Falls had to have been one of the more impressive and memorable waterfalls that Julie and I had visited in Tasmania. It was definitely up there as one of the best waterfalls we had seen in Australia, and by its inclusion in our Top 10 Australia Waterfalls List, that should tell you how highly we thought of this attraction. Indeed, the falls tumbled at a cumulative height of 104m making it one of the highest waterfalls in the island state. In addition to the waterfall itself, we even managed to get quite the thrill from standing on a harrowing suspension bridge spanning the george well above Montezuma Creek (or Avon Creek) to view the falls. Julie and I had also found this place to be tranquil and naturesque despite its history.

Like with most things that were worthwhile, we had to earn our visit with a bit of a long walk. The walking track followed the old North East Dundas Tramway route that used to run between Zeehan and the old site of Williamsford in the 1890s. As a result of its past as a place to extract resources, the trail also featured a mine shaft, railroad track remnants, recovering old growth rainforest, and some side waterfalls. Although the excursion was said to take 3 hours round trip, Julie and I took around 3 hours and 15 minutes though some of that time was for picture-taking. According to my GPS

logs, the track was around 9.6km to 10km long. That said, despite the track’s length, the entire walk was flat (as well as mostly shaded) as most of the trailblazing work was already done with the construction of the tramway.

From the fairly spacious car park and picnic area, we immediately went past a trailhead sign and walked past a pit toilet shed before the track went past an unsigned fork and veered left before descending towards a bridge over Baker Creek. Shortly after crossing the bridge, there was another fork where the path on the left briefly ascended to a wider track that I believed we could be sharing with 4wd vehicles. The other fork zig-zagged up a couple of switchbacks before getting to the same wider track. There was a separate track leaving the car park and would have joined the wider 4wd track after fording Baker Creek further upstream. In any case, from this point forward for the next 3.9km, we would continue on this joint foot trail / 4wd track as it followed along the Ring River flowing audibly well below the track.

After about another 150m, there was a sign talking about how there were about 60 bends for every two kilometres in distance along a line (or about 6km of tramway). To the left of the track near this sign was a small side waterfall that was barely flowing behind the thick bush. The track would continue to be flanked by ferns, tall trees, and some walls that might have been blasted to make way for the tramway. I also noticed some tyre tracks barely fitting within the narrow walking track suggesting that it wasn’t that rare for offroad enthusiasts to be driving here.

At about 1.2km from the small side waterfall (or roughly 1.6km from the trailhead), the track then passed another fork before going across a sturdy bridge crossing Bather Creek. This sturdy bridge replaced an adjacent old bridge that was about to be rotted through. Beyond this bridge, the track then veered to the right and continued alongside the Ring River as the track went over more wide ledges, blasted corridors, remnants of railroad tracks, and bends before reaching a sign and cul-de-sac after another 2.5km from the old bridge. The signage here said only walkers could proceed further, and the cul-de-sac was to allow vehicles to park as well as made a three-point turn to get out.

Along this walkers-only section, the wooden planks that once spanned the rails of the tramway were definitely more apparent and abundant. After nearly 600m from the sign, I spotted another side waterfall on the left, where it was possible to get up to with a little scrambling amongst the bush. Also nearby this spot, it appeared that the track started to follow Montezuma Creek instead of the Ring River. Roughly another 300m further, the track then passed right by a former mine shaft entrance, where the tunnel went deep enough to block out a fair bit of light before reaching a barricade.

Another 100m beyond the mine shaft entrance was a fork in the track where steps on the right fork led up to one side of the suspension bridge, which was once a 48m long trestle bridge. The left fork continued to the foot of Montezuma Falls. While on the suspension bridge, we had to be cognizant of the safe load limit of two adults or one adult and two children. It was precariously suspended high above the gorge with Montezuma Creek (or Avon Creek according to some maps) visibly far below. From the middle of the bridge, we were able to get attractive views of the gorge downstream as well as a frontal view of the entirety of Montezuma Falls. We just had to be very careful not to drop a phone or anything else that could fall through the openings in the bridge below.

On the other side of the bridge, it appeared that the rapid growth of the rainforest (aided by 3m of annual rainfall) obstructed the view of the falls as of our latest visit in late November 2017. On our first visit back in late November 2006, I was able to photograph Julie watching Montezuma Falls while she was standing in the middle of the bridge!

After having our fill of the suspension bridge, we went back to the fork and took the other path, where the track ultimately terminated at the foot of Montezuma Falls’ giant drop. There was a lookout deck (for a neck-cranking view) as well as an opportunity to do a little scrambling on fallen rocks to get close enough to the falls to feel its spray. Of course, those fallen rocks were also reminders of the hazards of getting too close to such a waterfall. In any case, it was worth noting that since this was a northwest facing waterfall, the morning sun had the potential of being in a bad spot once it breached the towering cliffs here. So if it was sunny, then early to mid afternoon would yield perhaps the most agreeable backlighting. Otherwise, it’d have to be cloudy or shadowy enough where everything in the shade would have uniform lighting, including the waterfall.

Finally regarding the name of Montezuma Falls, I often wondered how the name of the last Aztec emperor made its way to the West Coast of Tasmania. Well, a sign along the track informed us that the name came from the Montezuma Mining Company, which used to mine for silver here in the 1890s (I think two of the signs there had a typo suggesting they were here in the 1980s). It was said that during the mining heydey, much of the forest around the tramway had been cleared, but we hardly knew this was the case during our hike as the forest seemed to have recovered around the track nicely. Prior to the Montezuma Mining Company owning leases in the area, the falls used to be referred to as Osbourne Falls.

We drove to Montezuma Falls from two different approaches – one from Cradle Valley and another from Queenstown. Even though Rosebery, Zeehan, and other mining towns were closer to the falls, I’ll just focus on the route we’ve taken since I’d imagine most people would have similar itineraries. I’ll start with the driving route from Queenstown first since that was the closest of the towns we drove from.

From Queenstown, we drove north on the A10 which started off as the Lyell Highway then became the Zeehan Highway after passing by the B24 road junction in 3.4km. We remained on the A10 for about 52km, when we reached the signposted turnoff for Montezuma Falls on the mostly unsealed Williamsford Rd just to our right and shortly before entering the town of Rosebery.

We then followed the Williamsford Rd for the remaining 6km to its end, where the car park was. At each fork in the road, signs kept us on the right track. Overall, this drive took us on the order of an hour or so.

From the Cradle Mountain Visitor Centre in Cradle Valley, we drove north on Cradle Mountain Rd for about 3km, then turned left onto Belvoir Rd (C132). After about 26km on Belvoir Rd (C132), we then turned left onto the Murchison Highway (A10). We then drove south for about 40km on the Murchsin Hwy (A10) through the town of Rosebery, and then onto Williamsford Rd on our left (shortly after passing through most of the town).

Once on the unsealed Williamsford Rd, we then took it to the car park at its end as described above. Overall, this drive took about 1 hour and 15 minutes.


Sweep of the falls to the suspension bridge. The camera couldn't seem to focus since the dropoff was so far down from the bridge. This was taken on our first visit back in late November 2006

Montezuma Falls History October 27, 2015 4:43 am by Peter - Just an update for you on Montezuma Falls Tasmania. The track below the waterfall was once a railway line used to haul ore from the Williamsford mine. Historically interesting because it operated the worlds first Garratt articulated steam locomotives. Hope that's of interest even though your focus is the waterfalls. ...Read More 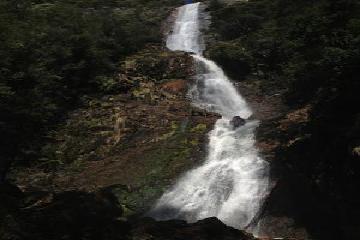 Top 10 Tasmanian waterfalls May 22, 2015 10:42 am by Caedence Kuepper - I have visited quite a few waterfalls in Tasmania (roughly 45-50) and I thought that it was about time that I compiled a top 10 list based on the falls that I have seen. 10. WARATAH FALLS Waratah Falls is an impressive 40-odd metre high waterfall that I enjoyed for a couple of reasons. Firstly,… ...Read More