Minyon Falls was a tall and wispy 100m waterfall in the lush Nightcap National Park near Lismore. We managed to visit this falls while doing a fairly extensive out-and-back half-day trip from Byron Bay. I guess the light-flowing state of this falls was actually better performing than much of the photographs we had seen in the literature prior to our visit in May 2008. Thus, I believe that the falls would flow best during the monsoonal rains of the Wet Season and would quickly diminish after a few weeks without rain given its apparent short season. We tried to time our visit for that transition period from the Wet to the Dry, and the photo you see at the top of this page was our result.

Julie and I were able to experience the falls from a lookout at its very top while also from a lookout platform further downstream at the Minyon Grass. Both areas were accessible from separate car parks (see directions below). We didn’t do the three-hour, 4km one-way hike to the base of the falls that was said to involve a 200m bouldery stream scramble as well as a rapid descent into a rainforest full of palm trees. The lookout at the top of the falls featured a panorama of the Bangalow Palm rainforest below. There was also another one-hour, 2km one-way hike from Minyon Grass to the base of the falls.

Since we used Byron Bay as the base of our visit to Minyon Falls, we’ll start the driving directions from there. Note that given how convoluted the unsealed roads were in the area, the route we’re describing below may not be the most straightforward. Admittedly, the directions below may seem convoluted because we had the aid of the Garmin City Navigator Australia

loaded on a laptop and hooked it up to a GPS

We followed Eureka Rd for about 8.5km towards Rosebank Rd, where we then turned right. After 1.5km on Rosebank Rd, we then kept right onto Dunoon Rd and followed this road for the next 5km (keeping left at the junctions where Dunoon Rd became Upper Coopers Creek Rd) ultimately joining up with the Minyon Falls Rd on the left.

After taking Minyon Falls Rd, we followed it for 1.3km to a T-intersection. The short access road on the left would go to Minyon Grass (there was a gate here that opened later in the morning of our arrival). The access road on the right continued for the next 700m or so to the small car park for the upper lookout of Minyon Falls.

For context, Byron Bay was 166km (under 2 hours drive) south of Brisbane and 770km (9 hours drive) north of Sydney. 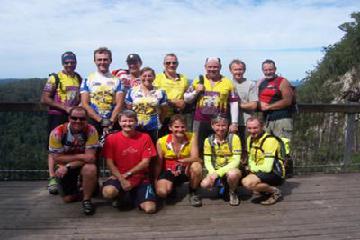 Mongrel Bastards Mountain Bike Club April 27, 2011 2:26 am by Dean Tummers - As a Queenslander in 'enemy territory' I was lucky enough to be allowed to tag along on a 75km mountain bike ride that started at Eltham to the South, took in Minyon Falls and looped back. It's an annual event hosted by the affectionately named "Mongrel Bastards Mountain Bike Club" in Lismore. Don't let the… ...Read More