Ebor Falls seemed to us to be a pair of attractive waterfalls with a gorgeous two-tiered upper falls (see photo above) and a plunging lower tier. This was yet another waterfall in the waterfall-saturated Waterfall Way, except this one was situated in the Guy Fawkes River National Park as opposed to the Oxley Wild Rivers National Park further to the west. Despite the temptation to give into waterfall fatigue from the quantity of waterfalls seen in this stretch of the New England Region of New South Wales, somehow Ebor Falls managed to stand out to us. Perhaps it was because this waterfall had a pretty healthy flow when the previous three falls we had seen earlier in the day were more on the disappointing side. Even Aborigines who had called this area home named the falls Martiam, which meant “great falls.”

Julie and I started the visit to Ebor Falls by driving to the car park nearest to the lower falls (see directions below). From this car park, we went on a short walk to the lower falls lookout. There was a section of the lookout that was closed (possibly due to erosion) so the views we were able to get were not totally free of obstructions. In addition, we were looking against the morning sun during our May 2008 visit, but since the falls were mostly in shadow, long exposed shots were still possible. Then, I had to use a telephoto lens in order to compose a reasonable photo of the waterfall without it looking too puny due to the distance from the overlook to the falls itself.

After seeing the lower falls, we had the option of hiking another kilometre to the upper falls lookout. However, we opted to return to the car and drive to the car park closer to the upper falls lookout (near the Ebor Cemetery). And from that other car park, it was also another short walk to the lookout that yielded the photo you see at the top of this page. We noticed basalt formations underlying the the two-tiered Upper Ebor Falls, which was a clear demonstration of how the more resistant rock layer was ultimately what gave rise to this waterfall. The view of the upper waterfall was also somewhat against the sun so long exposure photos were a bit bright or prone to lens flare.

Finally, the cumulative height of all the main tiers of Ebor Falls was said to be 115m. Truthfully, that seemed to be a rather generous claim unless there were more tiers not immediately visible from the sections that we visited. Nonetheless, we thought this was one of the more scenic (if not the scenic) waterfalls on the Waterfall Way during our trip through this area.

Ebor Falls was some 40km west of Dorrigo or 40km east of Wollomombi Falls along the Armidale-Dorrigo Road (also known as Waterfall Way, Hwy 78). The signed turnoff was on the north side of the road.

Fixated on the lower waterfall


Fixated on the upper waterfall 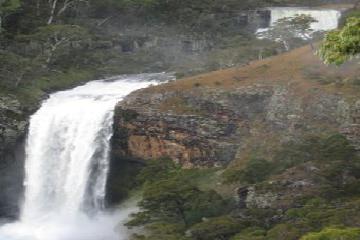