Browns Falls was a short 10-15m waterfall that was remarkable to us in that it plunged over basalt columns that we could argue were every bit as pronounced as some of the more famous examples of these types of waterfalls in Iceland (e.g. Svartifoss). As you can see from the photo at the top of this page, some of the columns were overhanging so it technically could have been possible to go behind the falls with care (since the broken off basalt blocks at its base looked very wet and slippery due to spray from the falls). Julie and I didn’t try it as we were content just to admire this pleasant little find, which required a bit of a non-trivial hike then stream scramble to reach.

Our adventure for this waterfall began at the Browns Picnic Area, where there was a car park (see directions below). Once we crossed the road, we were met by a sign suggesting it was merely a 20-minute 600m walk. However, once we followed the track, it descended right into the shadowy depths of the drainage surrounding the creek that we ultimately had to follow to reach the waterfall.

As we went further upstream along the creek, the track started to disappear and we pretty much followed the stream. The creek itself was low enough that we never had to risk ruining our Gore-tex boots whenever we had to cross or walk within the stream (though I could imagine if the stream had higher flow, this statement may not be true). Along the way, we encountered some small cascades, which added to the quiet and idyllic setting that made us realize that we were in a place that seemed relatively untouched (save for some bordering private agricultural lands just outside the drainage).

Julie and I started to wonder if we had gone the correct way because the sign at the trailhead suggested it was a shorter hike than it was turning out to be. Fortunately, we persisted until we ultimately were face-to-face with the attractive Browns Falls as the shady confines of the stream scramble gave way to a little bit of an opening at the head of this mini ravine. Overall, Julie and I spent about 75 minutes away from the car, but some of that time could have been due to the fact that we did scratch our heads and go back-and-forth wondering if we had missed the falls. So perhaps the signage could be correct had we not doubted ourselves and just kept going.

When we returned to the car park, we met up with a small group of people at the car park looking for platypus. We didn’t see any during our hike, but apparently, they were convinced that they could be spotted here. If that was true, that would be remarkable because I was well aware that these organisms were very shy as well as endangered native species of Australia.

We’ll pick up the driving directions from the Spring Creek Rd (also called the Falls Drive) just 2km south of the town of Killarney on the Warwick-Killarney Rd. Killarney was the nearest town to Browns Falls. For detailed directions on getting to this junction, see the Queen Mary Falls page. 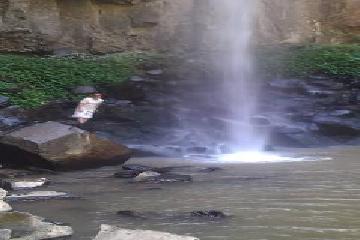 Browns Falls October 14, 2013 4:04 am by Luke Maxwell - We made the trip out to Killarney to do all four waterfalls. Browns Falls was one of the highlights - the walk can be tough in parts as there isn't much of a trail and also takes longer than the 20mins it says it does but my 2 year old and 4 year old daughters… ...Read More

Memorable visit to Queensland (Killarney) September 29, 2009 3:53 pm by Maria Isabel Y. Villar - I've been in Queensland last December 2008-March 2009. I visited my sisters in Killarney and my brother in law is a Dagg... I was fascinated to see all the pictures specially the fall in Killarney... these are the places I've been visited and took a lot of photos and memorable memories with my family. The… ...Read More