Barron Falls was once a mighty 131m waterfall descending from the Atherton Tablelands towards the Barron Gorge and lowlands near Cairns. These days most of the falls was diverted for hydroelectricity and hence the falls appeared to us as nothing more than smaller strands of water weaving between the natural grooves within the exposed bedrock during our May 2008 visit. It was certainly nothing close to the monsoonal flooded state that the post cards and advertisements would show, and that full flow would only occur directly in the Wet Season during or immediately after heavy rains.

Julie and I experienced this waterfall as part of the Kuranda Scenic Railway though in this particular case, there really wasn’t anything that would’ve stopped us from self-driving. Our excuse for doing this as part of the railway was to also see Stoney Creek Falls as a bonus as well as to not have to drive a rental car whose undercarriage we damaged while driving to Blencoe Falls a couple of days earlier. With the next day being the day we would return the rental car, we simply didn’t want to take any more chances with our luck.

So for whatever it was worth, we did the organized tour that took us by bus from Cairns to Kuranda at 9am, then we boarded a train that left from Kuranda back to Cairns at 2pm. The train came to a stop and let us get off the train to check out Barron Falls from a lookout platform for about 10 minutes. It appeared that had we self-driven, we could’ve arrived at this same overlook after a short walk. In any case, our early afternoon arrival at the falls turned out to be suboptimal from a photography standpoint as we were somewhat looking towards the early afternoon sun.

Apparently, we could’ve also exercised another option to experience Barron Falls by taking the Sky Rail. Since we didn’t do this option, we can’t say anything about it. Perhaps we might give this a go on our next visit to Far North Queensland.

Since we only visited this waterfall as part of the Kuranda Scenic Railway excursion, we can only advise on the way we did it. That said, I didn’t recall having to drive at all on the day we did this excursion.

Basically, we caught a bus that took us from Cairns to Kuranda Village at 9am. Then, after being left to loiter around the town of Kuranda for the next few hours, we then caught the 2pm train leading from Kuranda back down to Cairns via the Kuranda Scenic Railway. I believe the Barron Falls platform was roughly 3km from Kuranda. 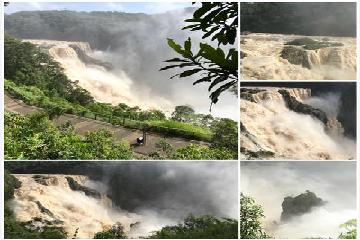 No longer a trickle! March 18, 2018 8:27 am by Suzanne Lennox - For all of those visitors who have been disappointed by Barron Falls as a trickle, see it roar! After a decent lot of heavy rain, the Falls are in full flight - a sight to behold. ...Read More 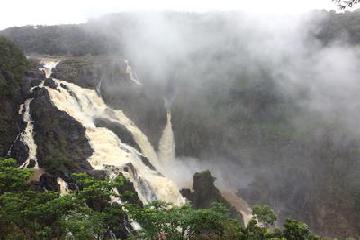 Barron Falls. March 30, 2015 8:05 am by Suzanne Lennox - I had visited Barron Falls a number of times but alas, they were merely a trickle .... But then the rains came and the trickle became a torrent. A few intrepids stood in the February rain vainly waiting for rainbows. During the rain, I also ventured up to Kuranda on the SkyRail. It was magical… ...Read More 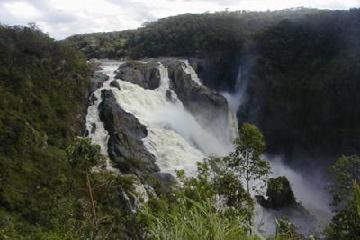