Apsley Falls was actually a pair of impressive waterfalls that we encountered while touring the Oxley Wild Rivers Gorge system. As you can see from the photo above, this waterfall seemed to be in somewhat low flow, but it was still pleasing to Julie and I (as reflected in its scenic rating). However, our visit here immediately followed our visit to Tia Falls so we were a little surprised to see how much less water Apsley had compared to Tia. We weren’t sure why this was the case at the time, but in any case, we definitely felt the sense that we were literally at the edge of an abyss as all the overlooks and walks were literally skirting the shadowy depths of the Apsley Gorge.

Our visit started with a stair-stepped descent from the car park (see directions below) to a pair of lookouts literally jutting out over the shadowy abyss of the Apsley Gorge carved into the New England Tablelands. Even the steps themselves gave us a little bit of that butterflies-in-the-stomach feeling as dropoffs were all around us (good thing there were rails to hold onto!).

The first of the lookouts was called McMillans Lookout (named after a Walcha resident who built the original steps) where we got a direct cliff-obstructing view of the Upper Apsley Falls. Apparently, the stairs to get here was a part wooden part metal reconstruction of the original wooden steps that actually led all the way down into the gorge. These days, there was nothing left of the old steps and this modern one didn’t go all the way down to the bottom. Beyond McMillans Lookout, we also went down to the other lookout called Lions Lookout. This one yielded a more open direct view of the falls.

Julie and I then returned to the car park where we proceeded to go onto the Oxley Walk, which led us to the Lower Falls. This was a 2.7km walk that was said to take 90 minutes to 2 hours though I’d imagine that would be if one were to go at a very deliberate pace. Julie and I managed to do the Oxley Walk as an out-and-back return walk to the views of the Lower Falls in a little over an hour (about 90 minutes total when considering the both walks taken together).

The walk started by crossing the Apsley River over a metal bridge. During our visit, the river seemed to be a little stagnant as a bunch of purple things were growing on the river itself. Beyond the bridge, we then went past a gate where the track then skirted the vertical-walled gorge as we were able to look upon the Upper Apsley Falls from a variety of angles, including a direct view as you see pictured at the top of this page. Julie and I then continued further along the gorge as the upper waterfall started to disappear from view.

Not long thereafter, we then found ourselves looking down into the profile of the next drop into the gorge which the Lower Apsley Falls was tumbling into. The walk continued to follow the rim of this gorge until it stopped at a pair of views where we were able to look directly at the lower waterfall. Unfortunately, it was against the sun on the morning we visited so that didn’t let our pictures turn out very well. In any case, this lower waterfall seemed to be just as tall as the upper waterfall.

We came to this waterfall from Tia Falls (see that page for directions on how to get there). From the Tia Falls turnoff, we continued northwest on the Oxley Highway (Hwy 34) for another 18km or so until we reached the well-signed Apsley Falls turnoff to the right.

If you were headed the other way from Walcha, go about 19km towards Port Macquarie and the signed turnoff will be to your left.

Fixated on the main part of the falls 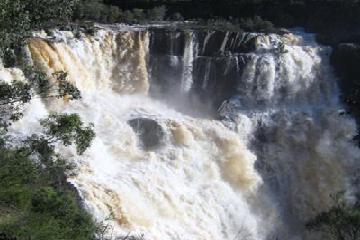 Apsley Falls in Full Flow May 30, 2009 2:10 pm by Ian Dutton - Taken 24 May 2009. The Apsley Gorge below the falls is also very spectacular and the falls are very easy to access, being only 1km from the Oxley Highway. Great camping and picnic spot too. ...Read More