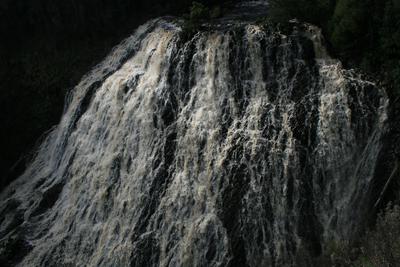 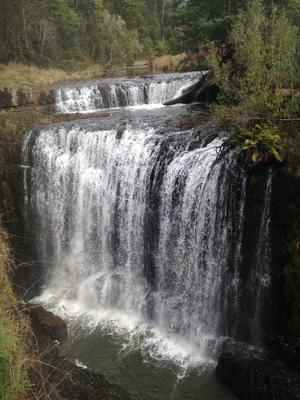 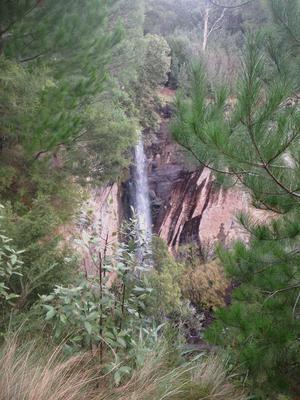 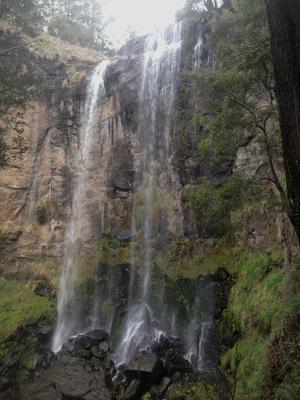 Recently we were up on Tassie’s north coast, seeing several waterfall along the way.

We were heading home later in the day, so we tried to make the most of the day.

First up, we decided to go check out Dip Falls. I had been looking forward to seeing this falls for quite a while. There had been quite a lot of rain in the days leading up to our visit, so I was expecting something good. The falls didn’t disappoint, roaring down its 60 metre cliff in spectacular fashion. From the bottom, the falls was so loud that we had to shout to be able to hear each other from barely a couple of metres away.

After checking out the falls from the bottom, we headed over to the viewing platform. The view from here was very good, although it was hard to get a picture of the whole falls at once due to its massive size.

Once we had left here, we headed back towards Burnie and Guide Falls.

Guide Falls was actually surprisingly impressive. It was flowing well (which came as no surprise after the successful outing to Dip Falls) but was taller than I expected. From the base of the falls I was able to stand almost directly underneath the falls in its narrow chasm.

After enjoying Guide Falls, we headed off to hunt for Sanderson and St Georges Falls, which were supposed to be right next to forestry plantation roads just a couple of km’s past Guide Falls. It sounded easy enough in theory, however it quickly became clear that it was going to be more difficult than we had thought.

The adventure began when the GPS (into which I had put the coordinates I had found online for Sanderson Falls) told us to turn off onto a gated private driveway. Thinking that it was just a blooper on the GPSs part, we turned off onto the next road that came up about 100 metres down the road. From the location where I thought the falls was supposed to be, it should have been less than 100 metres away, but there didn’t seem to be anywhere to stop, as the road was surrounded by thick blackberry bushes and low scrub. Thinking that the falls must be further along the road, we continued onwards.

Not long after, however, the road turned into a rocky mess, and Mum was forced to pull over, as there was a serious chance of a popped tire on our little 2WD.

I still hadn’t given up though, and decided to jog further along the road to see if I could find the falls. After about 5 minutes, I started to hear the sound of crashing water, and soon afterwords I found some sort of track which led towards a cliff barely 20 metres from the road. From here I was able to get a very partial view of St Georges Falls. The unfenced 60 metre (roughly) high cliff face barely a metre further forward was pretty scary, but I forced myself further forward to get a better shot of the falls. From the edge of the cliff I was able to get a somewhat satisfying look at the falls plummeting into the gorge below. It was a shame that it was impossible to get to the base, as it looked like it would be truly spectacular from there. The one downside to this waterfall was the rubbish that some idiot had decided to chuck off the cliff, which was quite disgusting to look at.

Once I had got back to the car, we resumed the search for Sanderson Falls. After unsuccessfully trying to figure out an easy way to see the falls, I decided to try and find a way through the scrub to possibly get a view. Luckily, I was able to find an old 4WD track that made navigating around the scrub considerably easier. Soon after, the top part of the falls came into view. Unfortunately the views were always very partial, so I started making my way down the steep hill to get to the base of the falls. There was no proper track here, but I was able to find my way down following little rabbit trails, and a few minutes later I was at the base of the falls. Sanderson Falls was quite a bit shorter than St Georges (probably around the 35 metre mark) but had much better flow. While I was down here, it became obvious that the only way to get the cliff top pictures I had seen online was from the private farm that we had passed.

Despite the adventures it took to access them, I felt very rewarded by the waterfalls I had seen.

A very enjoyable day of waterfalling.

About Dip Falls and Ridgley waterfalls