Wigmore’s Waterfall (also known as Papua in the Cook Island’s Maori tongue [or Papua Waterfall]) is the lone waterfall attraction that we’re aware of throughout the Cook Islands.

Actually, as you can see from the photo above, it might even be a stretch to say this is a legitimate waterfall given how temporary it is. When we arrived at the falls, it was mid-January (their Wet Season), but it was also an El Nino year (which was later confirmed when we got home and got bombarded on with relentless precipitation and even a waterspout or two off the coast). Typically, the South Pacific has been known to experience less total rainfall during El Ninos, but also be more prone to typically rare yet destructive Cyclones. Maybe that might have something to do with the lack of significant rainfall in the Cooks during our visit.

In any case, we did hear some running water from somewhere above the falls, but hardly any (if at all) flowed over the precipice and into the plunge pool below. Given that there was a pipe running across the top of the falls as part of the Papua Intake, perhaps there might be a bit of manmade intervention further restraining this waterfall’s performance.

So given our observations, I’d argue that this waterfall only flows after sustained heavy downpours (like several consecutive days worth of rain). Otherwise, there’ll be nothing but ponds, mud, wet rocks, and tons of mosquitoes.

Perhaps if you were to plan your trip, this waterfall may only be worth a bother in the February or March timeframe when the Cook Islands would be well into the latter stages of the Wet Season thereby giving the waterfall’s drainage a chance to saturate. Yet even with that said, it’s hard to ascertain exactly how reliably this waterfall can be seen based on our disappointing sample of one. So I guess the bottom line is you’ll have to see for yourself.

Then again, Rarotonga is a very small island so making the self-drive or even walking or bicycling your way up to the falls still won’t take more than a day or less depending on where your resort is located.

As for logistics, the easy-to-miss turnoff for the falls is near the failed Sheraton Resort just west of the bridge by the Vaima Restaurant on the south side of Rarotonga Island.

The potholed access road forks inland from the main circle-island road and starts off unsealed before going sealed again (still with plenty of potholes though). Rental cars and even scooters should have no problems getting to the end of the road and the picnic area right at the Wigmore’s Waterfall itself. Moreover, this road is also [the last] part of the roughly 4-hr Cross-Island Track that cuts right through the mountainous interior of Rarotonga passing by Te Rua Manga (the Needle) as well as the Wigmore’s Waterfall itself.

That failed Sheraton, by the way, was a result of a massive investment undertaken by the government and stakeholders overseas that ended up going awry due to some of those overseas stakeholders squandering (perhaps stealing?) the money. The end result was a big scar on the southern side of Rarotonga as well as a large part of the country’s national debt.

On the flip side, perhaps the fact that the Cook Islands doesn’t have multinational mega resorts like this (at least when we were there in early 2010) might be a blessing in disguise. After all, the country was allowed to maintain its laid back and largely non-commercialized identity; thereby coming closer to embodying that tropical paradise that overseas visitors seek, and which some of the other South Pacific islands have lost or are losing to commercialism. 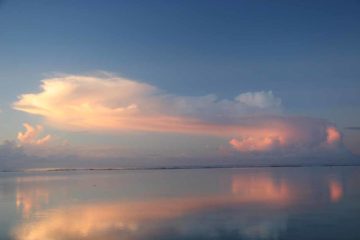 Wigmore’s Waterfall after moderate walk January 23, 2011 10:41 pm by Jeff - Take the circle bus from downtown Rarotonga and get off near the waterfall. Walk up the road to the interior and it is a modest sized waterfall where visitors can swim below it. We have seen horses walking on this road and banana fields. If humid weather, can be lots of mosquitos. Worth the visit. ...Read More