The Tavoro Waterfalls (also Tavoro Falls as well as the Bouma Waterfalls or Bouma Falls) are a spectacular series of three waterfalls nestled within the Bouma National Heritage Park.

The first waterfall, called the Lower Bouma Falls, is said to be 24m tall and is easily the most popular as it allows swimming. The Middle Bouma Falls is said to drop 15m. Finally, the double-barreled Upper Bouma Falls has the shortest drop of the three at 10m, but it has a serene setting and it seems to be a much more secluded place for a swim to beat the tropical heat.

The Bouma National Heritage Park sits on the eastern side of Taveuni Island, which is known as the Garden Island because it does receive frequent rainfall and is quite green. We self drove to the park (see directions below) though I believe there is a cheaper but less flexible alternative by hiring a shuttle. If you go this option, I’m sure you’d have to check for departure times, but I’ve read that this shuttle covers most of the resorts. It seemed that most of the resorts, including the one we stayed at, were on the Western side of the island.

Once at the small car park for the Bouma Park, we paid the admission fee, and then we were on our way. The initial part of the hike seemed to be like we were walking on wet grass. On the morning of our hike, we noticed many frogs hopping about in the grass. But barely 10 minutes into the hike, we reached the Lower Falls (see photo at the top of this page). It had a wide plunge pool that seemed to be conducive to swimming thereby making it quite popular. We even saw a changing area to get in and out of swimming clothes into something dry. So given the combination of short walk, facilities to make it easy to swim here, and the fact that the waterfall itself was very pretty, it’s no wonder why falls was easily the most popular of the three.

Beyond the Lower Falls, the trail started to ascend several steps as it went pretty extensively uphill for another half-hour. Somewhere during the ascent, there were gorgeous views looking back out towards the ocean where palm trees fronted the otherwise blue ocean with a glimpse of Qamea Island as well.

Somewhere further along this ascent, the trail briefly flattened out so we could go across a rope-assisted stream crossing. Then, we ascended a little more before we got right in front of the Middle Falls of the Tavoro Waterfalls. Even though this part of the hike required a bit more physical exertion than the first, we thought the trail itself was fairly easy and weren’t surprised to see a few more people still come out this far.

Beyond the Middle Falls, things got a bit more challenging. The trail became much less developed and overgrown in places. Meanwhile, we constantly had to be wary of slipping and falling due to the terrain as it tended to be on slippery surfaces such as wet and muddy rocks throughout. I believe we had to go through two more stream crossings with ropes to help us keep our balance. And in addition to the potentially hazardous footing, the trail did climb even more.

Eventually after an hour of this moderate-to-fairly-difficult hike, we reached the Upper Falls of the Tavoro Waterfalls and its double-barreled drop. I actually scrambled to the middle of the stream right in front of the falls to get a clean photo of it, but it felt nice to just chill out here with Julie. Since we were the only tourists on this part of the hike when we did it in January 2006 (I don’t recall seeing anyone else except maybe a villager or two), we pretty much had this serene place to ourselves except for some pesky mosquitoes and some native birds whose songs we could hear.

Anyways, while we were sticky with DEET and sunscreen meshing with the perspiration from the tropical humidity, we were quite relieved to have finally reached the falls and looked forward to heading back.

If we were really adventurous, we could’ve booked a guided hike that would continue past the three waterfalls and go to the top of the mountain at Lake Tagimaucia (pronounced “TANG-ih-mao-thee-uh”), where the legendary Tagimaucia flower would bloom at specific times of the year. By the way, that flower happens to be the national flower of Fiji.

If you’re entertaining thoughts of getting up there without a guide, I personally wouldn’t recommend it. We had a hard enough time as it was just getting to the Upper Falls. I couldn’t imagine how much more difficult it would be to keep going in even more rugged conditions without a guide.

From the Garden Island Resort near Waiyevo in Western Taveuni, we drove about 38km going past the airport and eventually arriving at the signposted Bouma National Heritage Park. That was where a lady came out to us, collected the fee, then directed us where to park the car (as there seemed to be very limited parking space).

As mentioned earlier, it’s also possible to take a shuttle from the resorts to the Bouma National Heritage Park. However, you have to pay close attention to the times that they show up and leave. The lack of flexibility may limit your options should you wish to continue onto the Lavena Coastal Walk after this hike (which was what we did). 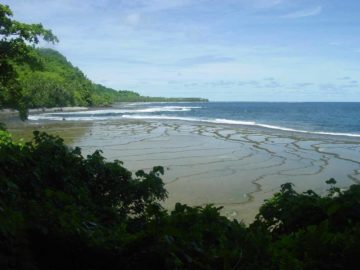 Fiji’s Bouma National Park January 19, 2009 11:31 am by Aaron Ward - Had my honeymoon on Taveuni in 1999. My wife and I loved it, all of it: the scuba diving, the people, the Garden Island feel, the short golf course, the hiking, everything, but most of all, we will never forget our hike around Bouma National Park, and the swim into the lower Tavoro falls. It… ...Read More