Shoshone Falls was a waterfall that Julie and I anticipated seeing immensely. We were intrigued by the promise of its size and volume, especially since it was given the nickname the “Niagara of the West.” Indeed, when we managed to see it on an unseasonably warm Spring day in April 2013, we saw rainbows arcing across the flowing part of the falls. We even saw some kayakers on the large plunge pool at the base of the falls giving us a sense of the size of the waterfall itself!

Unfortunately, this waterfall seemed to have lost much of its luster given hydroelectric developments immediately upstream of the falls. Much of the water in the Snake River drainage had been diverted to support the agricultural industry while much of the remainder of the water was diverted to generate power. All that remained of the Snake River that managed to escape diversion resulted in the waterfall itself. Even though we came during the peak period of the snow melt, the gauge indicator at the entrance kiosk ($3 vehicle entree fee during our visit) said the water level was “low”, and the photos you see on this page merely reflected that low waterflow in mid-Spring.

We weren’t sure if this was typical for this time of year, but it left us with the impression that it could have been so much more than what we saw (or at least belonging on our Top 10 USA Waterfalls List). Historical photos of the waterfall from the interpretive signs suggested that it would have been horseshoe-shaped. However, during our visit, it seemed like the far right side of the horseshoe was only trickling though most of the left side of the falls had satisfactory flow. In fact, from furthest overlook, I was able to see that the rock wall itself had a bit of a horseshoe shape corroborating this notion that the falls once possessed that signature shape characteristic of powerful waterfalls.

I’d imagine that as the season progressed towards late Spring and Summer, the flow would be even lower or go dry. So despite the Snake River being a major river system, the window to see Shoshone Falls was still limited to the March and April months depending on the snowpack in the Rockies and how quickly the snow would melt given the warmup during the Spring months.

That said, this was also a very easy waterfall to see. From the large car park area, we went down a short flight of steps and onto a fair-sized viewing platform protruding out from the immediate cliff face. This was by far the most common way to experience the falls, especially as we noticed the steady of stream of people coming to this spot to get their photos.

There were more views further downstream from the primary viewpoint along a mostly paved walkway. These other views provided slightly different viewing angles, and we found them to be appealing mostly because most visitors didn’t bother checking out anything beyond the immediate viewpoint nearest the car park.

The paved walkway continued to go further away from the falls until it ended near a fence erected to prevent access to some stairs leading down into the gorge. It appeared that erosion might have done in this access as it seemed like the stairs led to a sudden dropoff within the mostly concealed gorge below. I wasn’t sure where these steps led to nor why they were there.

Perhaps the one view that yielded a truly different contextual perspective of Shoshone Falls was the furthest overlook that I was able to access. However, this was only accessed from a paved walking path (a sign indicated it was named the “Centennial Trail”) that started from some steps rising above the souvenir shop in the car park. From there, I found the paved walking path that seemed to roughly follow the path of the Snake River Canyon. I noticed a few locals engaging in jogging on this paved walkway so I would imagine they were local residents who would visit the falls or at least use the path as part of their exercise routine (possibly from the nearby town of Twin Falls).

After roughly a quarter-mile, a spur path led to that last protruding viewing platform where I could get a direct look at Shoshone Falls itself backed by the butte nearest the car park. It was only from this vantage point that both the width of the falls and the horseshoe-shape characteristic would be most apparent.

It was interesting to note that I had come across a sign closer to the car park indicating that Evil Knievel made an unsuccessful attempt to jump the Snake River Canyon with this viewing spot being one of the end points of his jump. So given that, I tended to think of this most distant view of Shoshone Falls as the “Evil Knievel Overlook.”

Overall, we spent about 1 hour and 15 minutes to take in all the overlooks. However, I could imagine if the initial overlook was enough, a visit here could take no longer than 5 or 10 minutes.

From the Blue Lakes Road (Hwy 93) running through the heart of the town of Twin Falls, turn left at the traffic light for Falls Avenue. Then follow this road for about 3 miles to the 3300E Road (there should be signs pointing the way to Shoshone Falls as well).

Turn left onto 3300E Road and follow this road to the car park, which is at the end of the road after a noticeable descent into the canyon. During the descent there is an entrance kiosk with water level sign. That was where we paid the $3 vehicle entrance fee (as of April 2013). 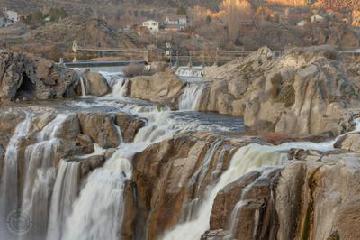 Shoshone Falls Valentines Day 2015 October 21, 2015 6:37 pm by Louis Ruth - Valentines Day of 2105 Shoshone Falls had 32,000 feet per sec running for a spectacular water showing. The falls were fierce as the water spray. Waiting for a nice clean shot with less water spray was hard to do. These two show show the falls close up. A circular polarizer was used to control the… ...Read More 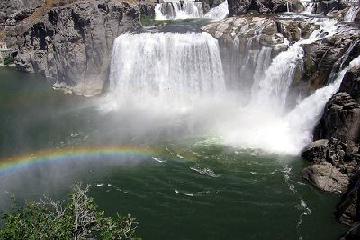 Shoshone Falls June 23, 2009 7:21 pm by _Anonymous10 - Shoshone Falls on the Snake River near Twin Falls, Idaho is truly spectacular during the mid-April to mid-May high season. The river plunges 212 feet to the base and spans a 900 foot rim. ...Read More