Diamond Creek Falls was another one of those waterfalls that I had to wait years for after the first opportunity to see it in August 2009 resulted in disappointment stemming from a trail closure as powerful storms had caused damage to the bridge at the start of the trail, making it unsafe for use. So much like my experience with Toketee Falls, it wasn’t until 7 years later when I finally got to experience this waterfall. The falls was said to have a height of around 70-90 ft while its drop fanned out to be almost as wide as it was tall at its base (so it sported some pretty impressive dimensions). There was the presence of some interesting volcanic rocks both near the base and in its underlying bedrock, which further reinforced the volcanic legacy that seemed to dominate much of the Southern Cascades, especially with the nearby Crater Lake being the most dramatic example of this. We had to earn our experience with the falls with a bit of a hike, but that merely allowed ourselves to enjoy more of the scenery along the trail that featured other waterfalls, a little lake, some impressively tall trees, and some interesting volcanic peaks in the distance.

From the opposite end of the Salt Creek Falls parking area, a sign pointed the way to Diamond Creek Falls. It followed a well-forested section on a broad trail before reaching a long footbridge over Salt Creek. There was also an alternate direct trail reaching the bridge skirting alongside Salt Creek from the Salt Creek Falls as well. After crossing the long footbridge (this was the storm-damaged bridge that prevented us from doing this hike on our first opportunity), we found ourselves in a densely forested and well-shaded area where we immediately started to follow blue diamond markers placed on tree barks to mark the way. After a couple of minutes, we then reached a trail junction marking the start and end of the loop hike encompassing all of the Diamond Creek Trail. We opted to keep right and do this loop in a counterclockwise manner thinking that we’d be facing the falls by the time we’d be skirting Diamond Creek.

As we did this, the trail briefly climbed out of the dense tree cover as it eventually reached what appeared to be an old lava field. At an bluff, we were able to look down at the Hwy 58 as well as some neighboring peaks of volcanic origin as well as the continuation of Salt Creek way down below. As we continued the hike which started to descend somewhat, we passed a spur path that led down to the left towards a small lake that was said to be called “Too Much Bear Lake” according to my map

. The trail continued to skirt around the northwest shores providing partial glimpses before the trail veered away to the west for good. Then, the trail meandered alongside some interesting rocks before it started to veer back towards the rim of the gorge carved out by Diamond Creek. At roughly 30 minutes from the footbridge at the start of the trail, we reached a signposted junction for a vista point. Taking the short spur trail to the vista point yielded perhaps our best look (which wasn’t saying much considering it was pretty much blocked by foliage and not real photographable) at what appeared to be the Lower Diamond Creek Falls. It was a shame that the view was so poor because it appeared to be a very tall and impressive waterfall that could have easily been a signature attraction of this trail in and of itself.

Continuing on the loop trail, it would continue skirting the gorge carved out by Diamond Creek yielding other obstructed partial views of that waterfall before finally getting close to its brink where the falls could be clearly heard but not seen. Then the trail continued to more-or-less follow the southern rim of the Diamond Creek canyon essentially climbing for most of the way as we continued to be flanked by tall trees. During our visit in mid-July, it seemed like the mosquitos on this trail were especially aggressive so we tried to keep moving as much as we could without stopping to allow them to get free shots at us. After about 20 minutes from the suboptimal Lower Diamond Creek Falls vista point, we reached another trail junction where a misleading sign pointed to our right saying “Lower Diamond Cr. Falls”. I say this sign was misleading because I thought this trail might backtrack towards that obstructed waterfall we had seen earlier, but it would turn out to go to a completely different waterfall. Therefore, I think the forest service should have referred to this waterfall as just “Upper Diamond Creek Falls” or just “Diamond Creek Falls”.

Anyways, after following this signposted spur trail, it descended steeply into the gorge carved out by Diamond Creek. The descent started by going down a nifty set of log steps carved into a large fallen tree with some hand holds for balance. After that, the trail then descended alongside a narrow and potentially slippery slope-hugging section that I’d imagine would be quite hazardous if there was still snow or ice in this section. At the bottom of the descent, we then crossed a one-sided log bridge to get over to the other side of Diamond Creek before the trail skirted around its opposite banks right up to the base of the fan-shaped Diamond Creek Falls.

When we showed up to the falls in the mid-afternoon, it was partially in shadow. I’d imagine that had we been here earlier in the day, the shadows would have been less prominent. But for that silky smooth long exposure photograph (which this graceful falls would be well-suited for), it would probably be best to show up when the entire falls would be in shade (early in the morning or late in the afternoon) or under cloudy skies. Anyways, at the base of the falls, it was noticeably cooler and less stuffier than the forested trail we had been hiking on up to this point. Indeed, the spray from the falls was refreshing, and we even tried to rock scramble a little further downstream to try to improve our view of the falls (so it wouldn’t be as in-your-face as at the end of the official trail). After having our fill of this pleasant waterfall, we then went back up the way we came and rejoined the Diamond Creek Loop Trail some 0.1-mile away.

Keeping right at the trail junction to continue going counterclockwise, we then reached an alternate vista point of Diamond Creek Falls just a minute or two later. The view from here allowed us to better appreciate just how tall the waterfall was though it was partially obstructed by the surrounding foliage. After having our fill of this falls, we then continued to climb on the loop trail before shortly reaching another trail junction. This time, the trail on the right followed Fall Creek, where there were more waterfalls (the first waterfall was said to be another 0.8 miles away or 1.6 miles round trip). We opted not to pursue those waterfalls so we kept left to conclude the loop hike. The return hike meandered through more forested terrain passing by some wildflowers in bloom as well as crossing a 4wd road a couple of times. Eventually after a solid 35 minutes of hiking without stopping, we returned to the footbridge over Salt Creek thereby finishing off the Diamond Creek Loop.

The nearest big town to Diamond Creek Falls and Salt Creek Falls would probably be Eugene. The town of Oakridge (36 miles southeast of Eugene) was probably the closest smaller town. The drive from Eugene via Oakridge was very straightforward as it would be 58 miles drive from the I-5/Hwy 58 junction just south of Eugene. The well-signed turnoff was on the right side shortly after leaving the tunnel.

Alternately, we also made the long drive to this waterfall from Medford, which was probably the closest big city to Crater Lake National Park. In going this route from the I-5/Hwy 62 exit in Medford, we took the Crater Lake Hwy (Hwy 62) for roughly 54 miles to a signed junction. Instead of turning right to continue on Hwy 62 towards Crater Lake, we kept left to go onto Hwy 230, which then continued for almost 24 miles to a junction with the Hwy 138. Turning right at this junction to remain on Hwy 230, we then stayed on it for another 18 miles (ignoring the Hwy 232 route going to the north rim of Crater Lake) before turning left onto US97.

We then took US97 north for roughly 17 miles (passing through the town of Chemult [one of the few places to get gas in this pretty remote part of Southern Oregon]) before heading northwest on Hwy 58. We then drove roughly 31 miles on Hwy 58 (passing by the attractive Odell Lake en route) before finally arriving at the turnoff for the Salt Creek Falls parking lot on the left. Overall, this drive from Medford to Salt Creek Falls took us about 3 hours.

This parking area had a pay-and-display system costing $5 per vehicle. Since this was in the Willamette National Forest, we utilized our interagency National Forest Adventure Pass ($35 for the year) and displayed that on our dash to avoid getting fined by the forest service.

Sweep panning around the base of Diamond Creek Falls 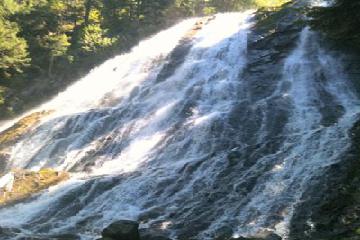 Two spectacular falls (Salt Creek & Lower Diamond) August 19, 2011 6:08 am by Mark Ockelmann - This is a spectacular fall but I found that diamond falls both the upper and lower views just as spectacular. Diamond falls is a bit of a hike in. I didn't measure it but it felt like 2 miles. There were several nice view points on the walk in showing the surrounding hills. The book… ...Read More