The Triberg Waterfalls were said to be Germany’s highest waterfalls where the Gutach tumbles 163m in cumulative height over a series of several waterfalls.

In any case, while we tend to doubt this claim of it being the tallest in Germany (knowing full well there are many other tallest waterfalls in the Bavarian Alps further to the south), there’s no denying that this is a well-known landmark that draws tourists looking for that quintessential Black Forest (Schwarzwald) experience.

Further refuting the tallest waterfall claim, we easily could have been considered each waterfall as its own entity (with the first one being the biggest and most impressive). This was especially the case since we weren’t able to get a view of all of them together.

In terms of nomenclature, we’ve also seen this waterfall referred to as the Triberger Waterfall, Triberg Waterfall, and the German equivalents of Triberg Wasserfall and Triberger Wasserfälle (where they pluralize the name as we’ve done in English since there is clearly more than one waterfall here).

From the waterfall car park (see directions below), we walked uphill along the main street (Hauptstrasse) towards the obvious wide walkway continuing uphill to the entrance of the Triberg Waterfalls (roughly 200m from the car park). After paying to get in, the path continued in a paved manner as it ascended gradually towards the first waterfall along a well-shaded and forested path.

Once we got up to the first waterfall, there was a side trail that crossed the Gutach in front of the first of the Triberg Waterfalls. This allowed us to get different angled views of the falls while also getting close enough to feel some light spray.

Back on the main trail, we then continued further uphill on the mostly paved path as it reached a footbridge allowing us to get in front of a second Triberg Waterfall while also affording us to look down at the first waterfall. We didn’t cross the bridge and keep going so we’re not sure of where else it went. In any case, we returned to the main trail and continued our ascent which became a little narrower and steeper (but still paved) the further up we went.

The trail continued up towards more footbridges crossing the Gutach while affording us frontal views of the upper parts of the Triberg Waterfalls. And eventually, we’d turn around at about the fourth waterfall we encountered. The trail continued to keep going up, but it seemed to veer away from the Gutach Creek so we turned around and returned back the way we came.

Overall, we spent around 90 minutes on the excursion. I’m guessing we walked about 1.6km round trip though it took a lot longer to go up than to go back down. That said, Julie and Tahia were swinging in the playground near the entrance, and we also spent some time checking out the House of 1000 Clocks where there were some huge cuckoo clocks on display (an apparent Black Forest institution).

We drove to the Triberg Waterfalls from Freiburg so we’ll describe the driving directions that way. There were a couple of different approaches so we’ll discuss them both starting with the northern approach.

First, we headed north from the Freiburg city center along the very busy B3 road for about 7km before turning off on the right for the B294. After about 23km on the B294, we then kept right to go onto the Talstraße at Prechtal, where the turnoff now headed towards Dorf. Once at Dorf, we would continue on the L107 Road for another 9km before reaching a junction with the B33 Road.

Overall, this drive took us around an hour.

Another way to go from Freiburg would be to head east on the B31 for about 23km before taking the ramp on the right then turning left onto the B500 Road. Once on the B500 road, head we’d head north for about 40km before turning right onto Wahlfahrtstraße (still on the B500). We’d then follow this road for another 750m before following the signs and turning left onto Kreuzstraße. The car park was on this street.

Overall, this drive would take us around an hour (though we took a little longer than that due to road construction on the B500 causing us to take a slower detour). 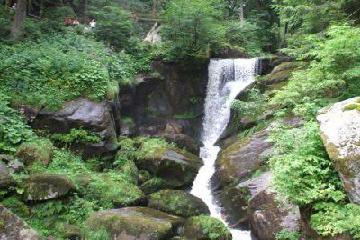 Triberg Falls (Germany) May 22, 2011 12:01 pm by Ruth Williams - The town of Triberg famous for cuckoo clocks and cake lies in the heart of Germany’s Black Forest. The Triberg Falls are on the edge of the town where the Gutach River tumbles 163m in seven cascades through the forest. There are three entrances (you have to pay) to see the falls all of which… ...Read More