The Todtnau Waterfall was an impressively tall waterfall deep in the Black Forest of southwestern Germany where the Stübenbächle dropped 97m. It was also one of the easier waterfalls to visit because it only required a short and flat 15-minute walk to reach that appeared to be wheelchair accessible.

In addition to the ease of access, there were also interesting chairs that you can lie down on and stare right up at the top of the waterfall. There was even a sheltered lookout which would be handy for taking pictures of the waterfall even in bad weather.

Although I made a very early morning visit to the falls when it was still under the shadow from the cliffs that supported it, I was able to do this short excursion without paying an entrance fee. However, under more normal circumstances, there was a cafe and kiosk where I’d imagine there would be a fee to get in. Given the amount of work put into this trail, this fee seemed like a reasonable thing to ask for.

While it was pretty straightforward to visit this waterfall along the wheelchair-accessible path, there was also a short upper trail and car park that started from the top of the Todtnau Waterfall and worked its way down. Thus, it’s possible to experience the falls from both the top and bottom in a singular excursion even though I only opted to experience the falls from the bottom.

Overall, I spent less than an hour soaking in the experience at the falls at a very leisurely pace without bothering to climb up to the top. It was also possible to go on a longer hike from one of the neighboring towns and villages to reach the waterfall as there were many trails that joined up with the ones around here.

I managed to drive to the Todtnau Waterfall from Freiburg so I’ll describe the driving directions that way. There were a couple of different trailheads for this waterfall, but I’ll start with the main one that leads to the base of the falls.

From Freiburg, the most straightforward route would be to head east on the B31 for about 8km before taking the ramp on the right and heading south on the L126. Continuing on the L126 for another 19km, we’d then reach a switchback or hairpin turn right in front of a cafe. Just after this switchback was a roadside car park on the left side.

Overall, this drive took me around 30 minutes without traffic.

For the upper car park, you can follow the directions as above but instead of going south on the L126 for 19km, you’d go for a little over 17km before turning left onto a climbing road that leaves the L126 and goes up the K3607 towards Todtnauberg. After about 1.3km on the K3607, the pullout for the upper trailhead of the Todtnau Waterfall is on the right.

Semi-circular sweep from an elevated vantage point above the gazeebo 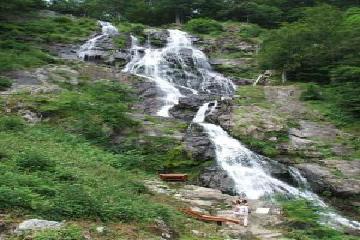 Todtnauer Waterfall (Germany) June 9, 2011 7:31 pm by Ruth Williams - The Todtnauer Waterfall can be found in the southern Black Forest just off of the L126 near the village of Todtnau. It falls 97m in two drops. From the car park there is an easy trail to the fall. A bridge crosses over midway and there are a couple of wooden reclining benches to allow… ...Read More