Pistyll Rhaeadr was a waterfall that quickly impressed us the moment we started to see parts of it as we approached it from the single-lane road leading to this quiet part of Wales that was quite close to the English border. And when we got closer to see its entirety (as shown in the photo above), that was when we realized that the 240ft (73m) height wasn’t all this plunging series of falls had going for it. Indeed, spanning the very middle of its overall drop was a natural bridge making this one of those rare waterfalls that could boast such a feature making it a pretty special place. And since the Afon Rhaeadr (Waterfall River) tended to have pretty reliable flow, that also meant that this waterfall also had some staying power.

Visiting Pistyll Rhaeadr was quite easy as we were able to park the car close by the waterfall near the end of the road from the small town of Llanrhaeadr-ym-Mochnant (see directions below), and walk the short distance to the footbridge right across the Afon Rhaeadr where we were able to get the most direct views of the falls. For such a relatively easy-to-access waterfall, Julie, Tahia, and I were quite pleasantly surprised at the relative peace and quiet here. Maybe the long drive to get here along with the single-lane roads might have had something to do with it.

In any case, we were quite content to experience the falls from here and from the tea room near the car park (called Tan-y-Pistyll). However, there was a trail that kept going past this bridge on the other side of the river (which I suspect might meander deeper into the Berwyn Mountains) as well as another trail further back from the car park that appeared to go to the waterfall’s top. So we didn’t have to exert ourselves very much to experience the best of the falls and almost all of the hour we were here was spent taking pictures.

According to my Welsh dictionary, the word pistyll (probably pronounced “PIS-tuhthl”) meant “well” and rhaeadr (“HRHYE-uh-dur”) meant “waterfall” suggesting it could be the “waterfall well”. However, according to the literature the translation of Pistyll Rhaeadr was more like “spring of the waterfall”. There was a sign here suggesting that this was the highest waterfall in Wales and England, but having seen taller ones earlier on in the trip (e.g. Gaping Gill, Cautley Spout, and maybe even Taylor Gill Force, among others), that claim could very well be in doubt.

Given the relative remoteness of the town of Llanrhaeadr-ym-Mochnant, there seemed to be many ways of getting here from more familiar towns in Wales. So we’ll just describe the routes that we took both involving Conwy as well as the Dolgoch Falls since we arrived at Pistyll Rhaeadr from Dolgoch Falls. You can see the detailed directions for that part of the drive in the link above.

In less than 70 yards, we then turned right onto the narrow Waterfall Street, where we then drove the remaining 4 miles on the single-track road to its end. There was a 3 pound fee to park in the car park for Tan-y-Pistyll tea room and bed and breakfast, but backtracking for about 0.2 miles, we managed to find space at a “free car park”, where there was some really rough spaces as rocks were jutting up from the ground and there were some pretty severe ruts and pits. Those who were fortunate to snag a spot here managed to avoid paying the fairly hefty 3 pound fee though there was definitely the risk of possibly damaging the rental car if not careful.

The route we took to return to Conwy from Pistyll Rhaeadr also works in reverse so we’ll describe our route in reverse as well. From Conwy, we would go south on the A470 for about 17 miles to the A5 (just east of Betws-y-Coed), then keep left to drive on the A5. We then would continue on the A5 towards the town of Druid (19 miles), where we would then turn right to go onto the A494. Heading a little over 4 miles towards Bethel, then go left onto the B4402 road, then after 3.5 miles turn left to go onto the B4391 road. Follow this road southeast for a little over 11 miles to Penybontfawr, then left onto the road leading to Llanrhaeadr-ym-Mochnant for 2.5 miles becoming Market St, then turning left onto Waterfall Street. The last 4 miles would be on the single-lane Waterfall Street leading to Pistyll Rhaeadr. This drive took us nearly 90 minutes.

Top down sweep of the falls as seen from the bridge spanning the Afon Rhaeadr with a zoom-in on the impressive natural bridge in the middle of the falls, then ending with a downstream view towards the waterfall cafe. 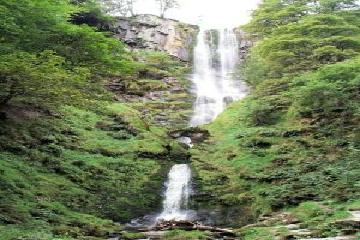 Pistyll Rhaeadr (Wales UK) September 18, 2012 8:33 pm by Ruth Williams - At 240ft Pistyll Rhaeadr is one of the taller Welsh waterfalls. It is situated in the Berwyn Mountains of mid Wales not many miles in from the English border. To access the falls from the village of Llanrhaeadr-ym-Mochnant follow the sign for the fall up a single track lane for about 4 miles. There is… ...Read More