Whisky Falls (I’ve also seen it spelled Whiskey Falls) was one of those waterfalls that we thought would be a breeze to visit because it didn’t require any hiking to see. Yet for one reason or another, in all the years that we’ve been in the area passing through Oakhurst on the way to Yosemite National Park, not once had we made a visit to this waterfall. Our earliest opportunity was back in 1999 when Julie and I were travel newbies and wound up staying at a campsite at nearby Bass Lake after naively rocking up to Yosemite on a Memorial Day weekend without advanced reservations. Of course back then, we didn’t know Whisky Falls existed as we didn’t start bagging waterfalls until the following year that fateful day when Julie brought home a book by Ann Marie Brown

after making a visit to REI. But all that changed recently in 2016 when I took my parents along for a Northern California and Southern Oregon trip, where I made it a point to visit the falls on the way up. And it was only then that we realized just how remote the waterfall was despite it not requiring a hike (see directions below). Perhaps, it was that remoteness that kept us from visiting this falls in our first 16 years of waterfalling, and yet that was probably why it wasn’t so busy and crowded despite its ease of access.

As for the waterfall itself, it was diminutive though it has been said to have a cumulative drop of 40ft over a couple of tiers on rounded granite slabs. With it being so easy to visit (once we found out how to access it by car), we looked for ways to extend our visit as roadside waterfalls often tended to be too easy to visit and hence become less interesting. And in doing so, I figured out that there was a little alcove behind the falls, where I was able to crouch into it from the side of the creek and get that unusual view of Whisky Falls from its backside. Meanwhile, Mom took off her shoes and felt the cold water of the creek to offset the pretty high temperatures during our July visit. Speaking of July, as you can see in the photo at the top of this page, our visit seemed to have occurred under fairly low flow conditions. I’ve read that this creek tended to flow year round, but its visual impact was probably best during the late Spring and early Summer months (May to June) when there would be much more water going over the falls. Even though Whisky Falls was pretty remote, we definitely weren’t the only people here as it was practically next to the Whiskey Falls Campground. That said, this place definitely felt much quieter and intimate for a roadside waterfall, and we enjoyed our 30 minutes spent here.

Although we visited Whisky Falls during a long drive from Huntington Lake to Oakhurst via Shaver Lake and Bass Lake, it seemed like the nearest town to make a visit to the falls was Oakhurst (which was where we managed to spend the night on the day we visited the falls). So we’ll start the driving directions from there. Oakhurst was about 47 miles (a little under an hour’s drive) north of the Hwy 99/Hwy 41 interchange in Fresno.

From the Hwy 41 and Hwy 49 traffic light in Oakhurst, we’d drive north on Hwy 41 for about 3.5 miles. We would then turn right onto Bass Lake Road (there was also a sign indicating this was the way to Bass Lake). Next, we’d follow Bass Lake Road for around 4 miles where we’d then bear left onto Road 274 (Malum Ridge Road). Then we’d continue for the next 10 miles on Malum Ridge Road before turning left onto Mammoth Pool Road (at a four-way stop near the town of North Fork). Following Mammoth Pool Road for just under a mile, we then turned left onto Road 233 or Cascadel Rd (there was a sign indicating Whiskey Falls Campground was this way). After about a half-mile, we kept left at a fork leading us onto Autumn Ridge Way (Road 8S09).

Once we were on Autumn Ridge Way, the road became unpaved at some point. We then followed this road for roughly 7.5 miles passing through an extensive burn area as well as a grove severely affected by bark beetles resulting from the multi-year drought in California. Most of this road was a little on the bumpy side, but it was quite doable by passenger vehicles except for one little bouldery stream crossing that looked like it could shred a tire if not careful. Other than that, we then followed a sign indicating that the Whiskey Falls Campground was to our right, and we turned right to continue on the Whisky Snowmobile Trails Rd. This road became a little narrower for the last 1.2 miles as it would ultimately arrive at a bridge. Whisky Falls was just a few paces upstream from this bridge.

There appeared to be a little sloping pullout on the left just beyond the bridge as well as a narrower pullout further down the road on the right (where we parked). Of course, if you’re camping here, there would be plenty of parking for your designated camping spot. Overall, this drive took us about just under an hour.

If you were to come from Huntington Lake like we did on the way to Whisky Falls, it took us around 2.5 hours to make this drive going south on Hwy 168 towards Fresno, then turning right onto Auberry Rd and following it north towards Mammoth Pool Rd in North Fork before picking up the rest of the directions as described above.

To give you some geographical context, Fresno was 221 miles (3.5 hours drive) north of Los Angeles and 188 miles (about 3 hours drive) southeast of San Francisco. 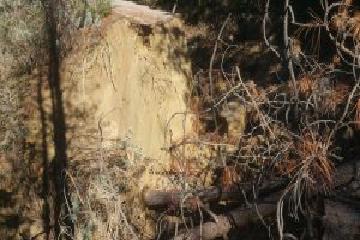 Autumn Ridge Road WASHED OUT June 18, 2017 7:08 pm by _Anonymous258 - Autumn Ridge Road to Whiskey Falls is washed out. You have to reach it from the Mammoth Pool Road or up Beashore Road. ...Read More