This trip was intended to share with the parents the wonderful experiences that Julie and I (along with a couple of friends) had just a couple of years prior when we did a Grand Circle trip. But since we had to fit this into a weekend, this exposure could only come in increments.

So on this weekend, we only covered Bryce Canyon National Park. However, unlike that first visit where Julie and I only experienced the place from the overlooks, this time we took the time to hike amongst the hoodoos for a completely different experience.

From a waterfalling standpoint, this place didn’t offer much except for one man-made waterfall that wasn’t flowing at Mossy Cave. Thus, we targeted more natural arches and bridges as non-waterfalling alternatives. An ulterior motive for this trip was also to start training for the grueling Half Dome hike in Yosemite later in the year. And by doing these hikes, we hoped our bodies would be more acclimated to the altitude and the exercise… 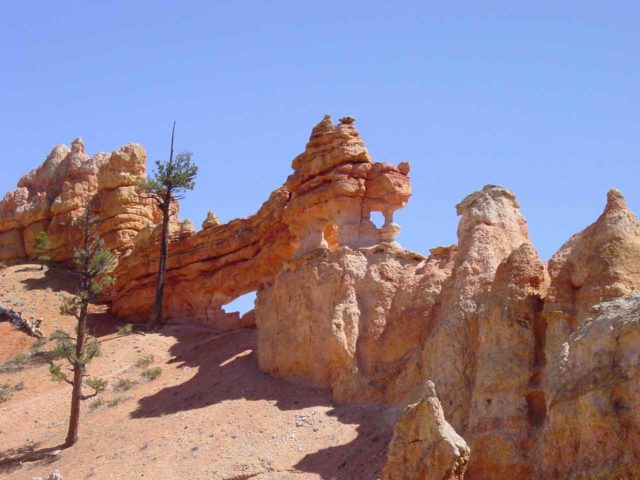 Mossy Cave – This short hike actually was one of the easiest and quickest ways to get up close to hoodoo formations that are a signature of Bryce Canyon National Park. It also let us experience a waterfall (though it wasn’t flowing during this visit) as well as an alcove that had icicles inside of it. One of the more compelling features we saw amongst the hoodoos was what looked like the head of Scooby Doo. Have a look at the photo and see if you can tell the resemblance 🙂 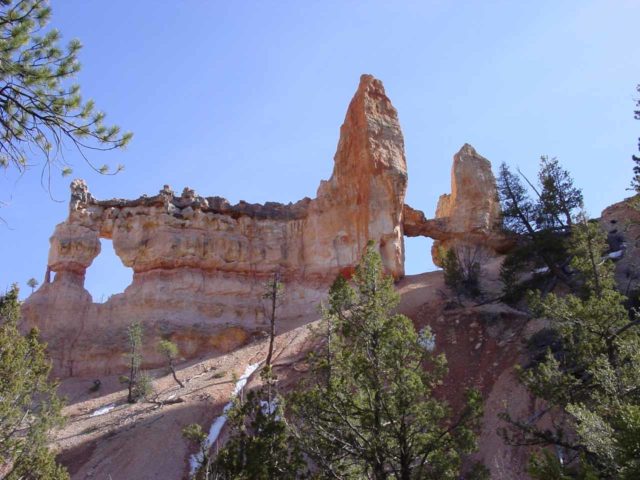 The Fairyland Loop Trail – This was not an easy hike due to its length as well as its up-and-down nature, but it did bring us close to interesting arch formations both named and unnamed – such as the Tower Bridge and the Chinese Wall. The scenery here was more of the subtle variety so it was more about being close to the hoodoos than targeting specific attractions. 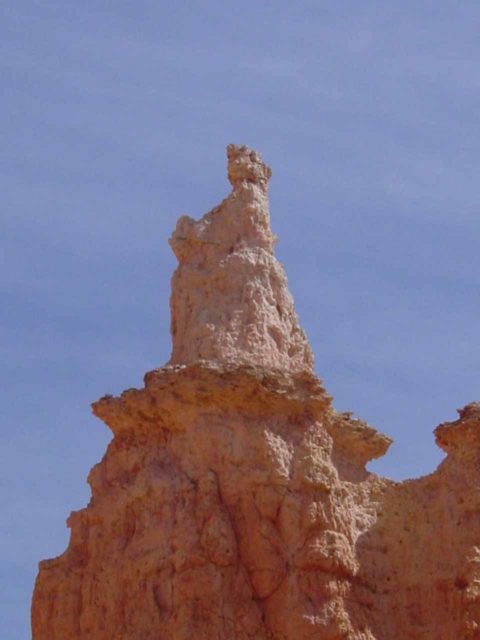 Queen’s Garden – When you hike down into the hoodoos, you often see where Nature can have some formations where the names really are indicative of how they look. Case in point, look at this photo and see if it really does look like the queen! 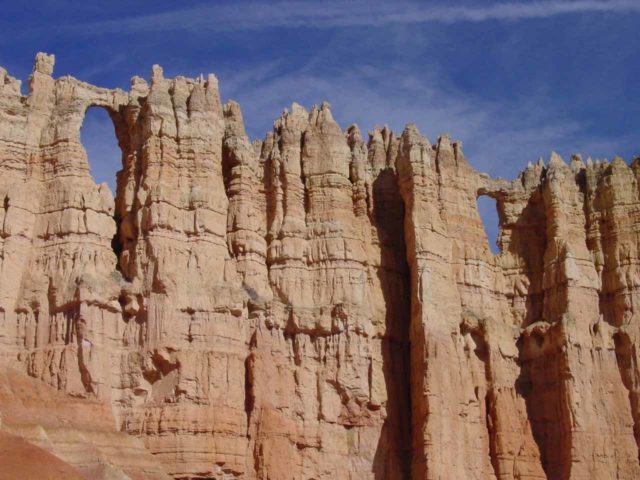 Peek-a-boo Loop – We combined this loop trail with the Navajo Loop Trail since we were already down in the depths of the amphitheater and didn’t see a need to keep going down then back up only to come back down again. Anyways, the main motivation behind doing this loop was to check out the arches of the Wall of Windows as well as a closer look at the Fairlyland Castle. 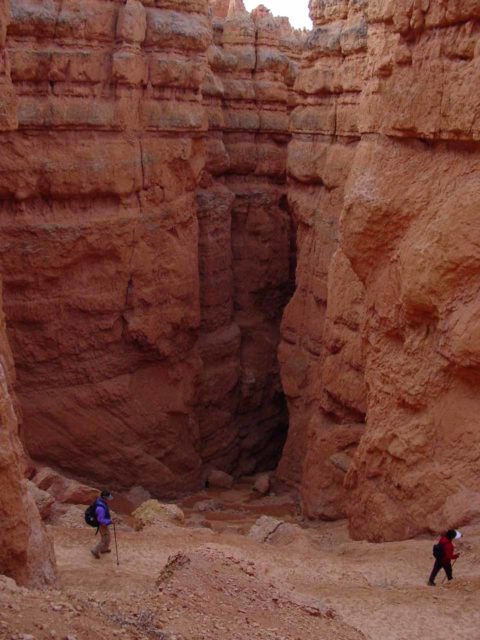 Navajo Loop – Of the loop hikes in Bryce Canyon, this one was probably the most action packed. Not only were we able to descend into Wall Street (a slot-like section with trees growing in between) but we also got to see the Twin Bridges as well as Thor’s Hammer. This is probably the most popular trail in the park, and it’s no wonder why.

Since no one took a day off, we actually endured a late drive to Springdale and split up the drive in such a way that we’d arrive at Bryce Canyon the next day. 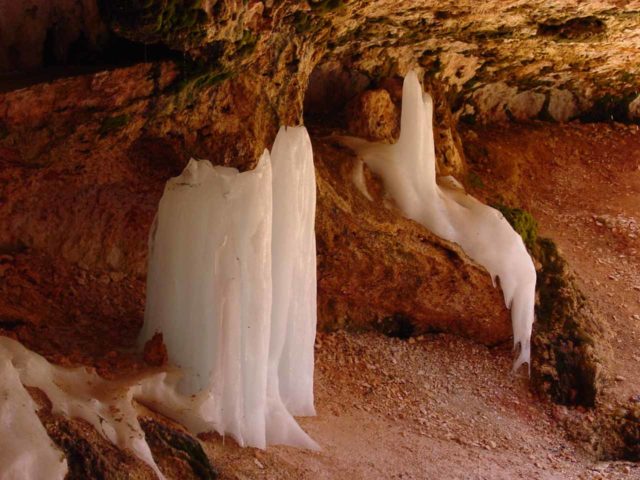 After starting the day continuing to drive out of Zion National Park, we then visited Mossy Cave. Afterwards, we then went into the main part of Bryce Canyon where we spend the rest of the afternoon doing the Fairyland Loop Trail. 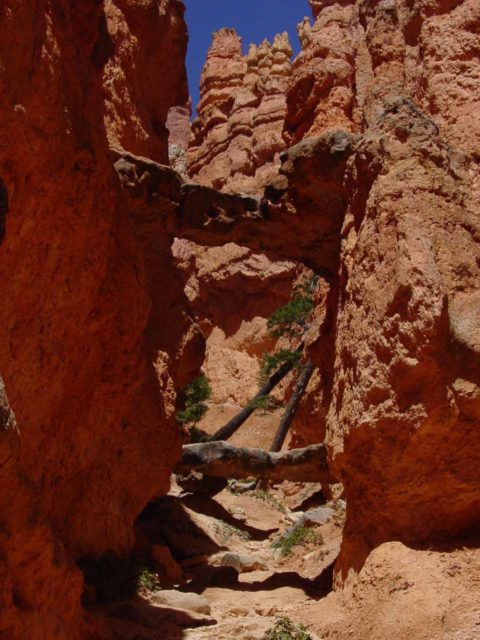 The day began with a sunrise at Inspiration Point. We then promptly did the Navajo Loop Trail (Thor’s Hammer, Wall Street, Twin Bridges), before doing the Peek-a-boo Loop Trail (Fairyland Castle and the Wall of Windows), then we finally went to the Queen’s Garden to see Queen Victoria before going back up. Once we got back to the car, we made the long drive home. 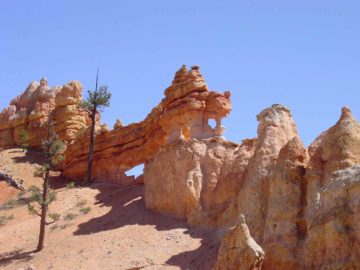 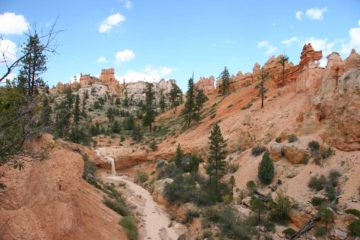